The World Series of Poker Winter Online Circuit Series has arrived and with it 18 WSOP Circuit Rings and a mountainous 100 Million Dollars in guaranteed prizes. The series runs from December 13 to January 10 at Natural8 – GG Network. Key events to mark down are the MIni Main Event, Christmas PLOSSUS, New Year COLOSSUS, and the star attraction, the US$ 1,700 Main Event US$ 10 Million guaranteed.

Two events have already been claimed. Joaquin Melogno locked up his second ever WSOP ring at the US$ 10K Super MILLION$ High Roller event and Christian Jeppsson won his first at the US$ 3K Deepstack No Limit Hold’em Championship. The budget opener Big $50 also ran with a massive 31,291 entries. It is down to the final 9 players.

With two events in the books, the Series Leaderboard has officially kicked off. At the conclusion of the series, the top 100 players earn a respective share of the US$ 100,000 cash prize. The top prize is US$ 10,000. Joaquin Melogno currently leads the race. For players signed up on Natural8, exciting incentives are lined up if you champion any of the ring events. Players can win from US$ 5,000 to US$ 50,000 in WSOPC LiveX Live Event Sponsorship. For new players, make sure to sign up on Natural8 to also avail of the new player incentives. We’ve got all the info below including recaps on the events tabled.

The second scheduled event of the series was for those wealthy enough to fork out a US$ 10,300 buy in. As expected, the high cost dragged out the creme de la creme with each one looking to seize a piece of the US$ 5 million guarantee. After a generous 20 levels of late registration, 314 turned up with an astounding 197 in added re-entries to drive the prize pool slightly north to US$ 5,110,000.

On the flip side, the two-day event concluded with Uruguay’s Joaquin Melogno needing only one bullet to ship the US$ 636,072.03 first prize and lock up his second ever WSOP ring. On his road to victory, he eliminated five players at the final table.

Melogno is one of Uruguay’s highly successful live tournament players. The Hendon Mob has him ranked 2nd in the country’s All Time Money List with US$ 2,271,662 in total live earnings. On December 2018, Melogno won his first ring at the WSOP International Circuit Uruguay US$ 2,500 Gran Final Millionaria earning US$ 505,606, which was his largest live score up until this win. Last year, he nearly captured a second ring at the WSOP US$ 2,500 No Limit Hold’em, finishing 2nd for US$ 264,104. Melogno has now earned a combined US$ 1,487,942 at the WSOP.

Seven hours in, the money was near with only 60 players certain to earn. After the fall of Nick Petrangelo (63rd) and Sebastien Grax (62nd), short stacked F Billard landed a lucky turn to avoid the bubble, RogerScruton also doubled up, however, Ludovic “Gr4vyB04t” Geilich was not so fortunate, busting on the bubble to Romain “Flingue” Dours. Once the money flowed, it was a shove fest resulting in a succession of dropouts. Three hours later, the last bracelet holder met his end when Joaquin Melogno’s pocket Aces dominated Mark Radoja’s pocket nines. It didn’t take long for the next three to fall to form the final table of nine led by Melogno. 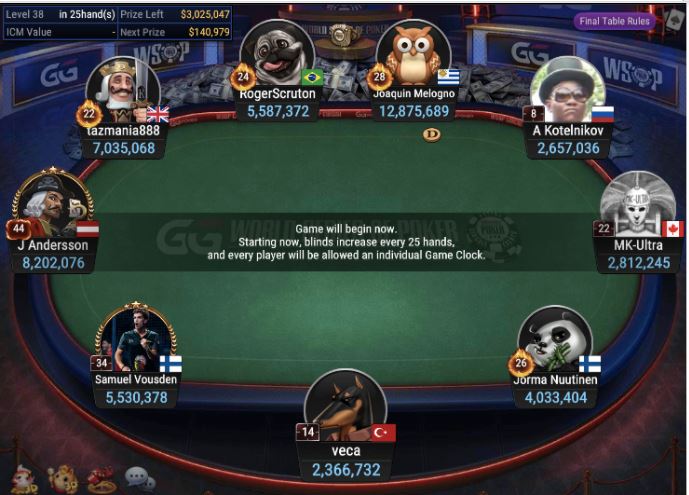 . It took another twenty minutes before the next showdown, this time it resulted in the fall of Jorma Nuutinen in 9th place to veca. RogerScruton was out 8th when pocket Tens couldn’t crack Melgno’s pocket Queens. For the next several orbits, Melogno and J Andersson took turns commanding the table to amass half the chips in play between them.

Looking to get in the action, Andrey Kotelnikov shoved and doubled up through Melogno while Vousden fell to Andersson. Kotelnikov doubled up again off Melogno with

bluff push on the river to seize the lead for the first time. Impressively, Kotelnikov came from eighth in chips at the start of the final table. Next all in pots went to veca with a triple up and then a double up. MK-Ultra also got paid fully to keep the table at six handed until he railed Philip “tazmania888” Mighall with

. Kotelnikov and MK-Ultra were now the new players in charge with each holding a third of the chips in play. However, both faced off resulting in Kotelnikov jumping to a huge lead when K3s both paired up to defeat MK-Ultra’s AKs top pair. Short stacked veca was drained out in 5th place as Melogno raked it in, then Melogno claimed a third victim in J Andersson (4th) with KQo dominating K6o. Three handed was soon down to two when Melogno’s AJo paired the ace to crack MK-Ultra’s pocket Kings.

Despite Melogno sitting on over half the chips in play, the final race for the ring was no walk in the park. Kotelnikov doubled up to retake the lead. Melogno grinded back up then both players exchanged shoves to reach par. On Melogno’s next double up with

, his lead widened to a 24:1 advantage and went on to close it out.

The US$ 3,000 Deepstack No Limit Hold’em Championship was as deep as it gets with the event running a lengthy ten and a half hours. The final table alone took nearly three hours, concluding with Norway’s Christian Jeppsson overcoming the 504 entry field. Jeppsson locked up his first WSOP Circuit Ring and a career high tournament score of US$ 213,927.

Taking a look at his past achievements, Jeppsson’s live tournament cashes date back to 2007. His first win was a big one, collecting US$ 151,977 at the 2008 EPT Budapest € 2,100 No Limit Hold’em. Since then, he has earned numerous five digit scores around Europe and in Las Vegas, however, it wasn’t until this triumph did he gain another six digit payout.

Picking up the action at the final table, Jeppsson carried in the largest stack. Also on the virtual round were triple bracelet winner Kristen Bicknell and ring holder Anton Wigg. Wigg fell in 8th place and Bicknell out in 5th place. The game then slowed significantly giving the chip lead time to travel from player to player. Jeppsson doubled up and in turn crippled Sosia “Aunty_Ninja” Jiang. Unable to recover, Jiang busted on a set of fours against Jeppsson’s

flush. Jeppsson continued to run hot railing Levinskas (3rd) to face Daan “DaanOss” Mulders at heads up. The opening hands quickly went to DaanOss to nearly even up the score. At this point, they decided to check the numbers. A deal was reached and play resumed for the WSOPC Ring. Jeppsson began to pull away taking down two big pots to create a 5:1 gap. The final hand was

pair on a board

The first event of the winter series was no chill at all, instead it was blazing hot with a thunderous 31,291 entrants heating up the 31 starting days. With buy in at a very affordable US$ 50, it bumped up the US$ 1 million dollar initial offering to a sweet US$ 1,439,386. On Day 2, 3,345 players battled to claim a piece of the pot with payouts starting at 1,600. After nearly seven and a half hours of action, the money was well reached and the final 9 was formed led by Russia’s Aleksey Savenkov “ImLuckPads”. The race for the ring and the US$ 168,810 first prize resumes on December 20 @0230 HKT. 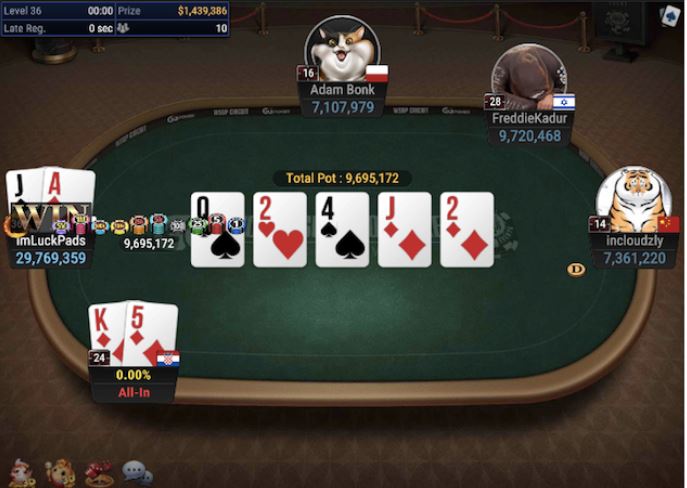 Leading up to the final two tables, bracelet winner Chris Rudolph fell in 40th place and Jessica Teusl down in 19th place. At 16 left, Vitor Martins “Alemao” was knocked out by then chip leader party_maker1, China’s “incloudzly” doubled up with red Queens over tiltducKK’s AQo, and Japan’s Ryosuke Kubodera “KBD05” busted with ducks against PhD_Don’s pocket nines. Next casualty was Brazil’s MariaJoao who got the boot from Aleksey Savenkov “ImLuckPads”. Another three drops passed, ImLuckPads shipped small blind Matija “crunch215” Dobric’s stack with a dominating

to form the final 9.

Play in the WSOP Winter Online Circuit on Natural8 for a chance to win BONUS WSOPC live event sponsorships worth up to $50,000.

Win the WSOPC Main Event to win $50,000 and become a member of the LiveX Crew. Sponsorship package includes:

Win a WSOPC Ring from any event with a buy-in of $1,000 and above, and you’ll get a LiveX Crew package that includes:

Win a WSOPC Ring from any event with a buy-in of $999 and below, and you’ll get a LiveX Crew package that includes:

Stay tuned to Somuchpoker as we bring you recaps of the 2021 WSOP Winter Circuit Online Series as it unfolds.