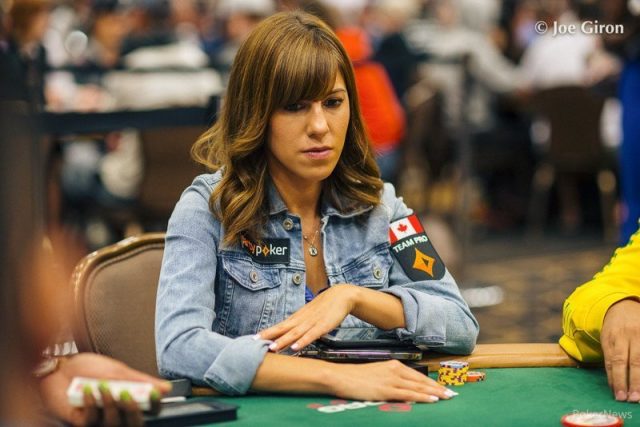 Kristen Bicknell is a Canadian professional poker player. She was born on December 29th, 1986 in St. Catharines, Ontario.

Bicknell’s bio on partypoker claims she “fell in love instantly” with poker when she took part in a college poker night with her friends.

In an interview for PokerGO, she said that she often watched the classic NBC poker show Poker After Dark. She particularly liked Jennifer Hartman, one of the best female players, who she drew great inspiration from to play the game.

Bicknell’s Hendon page shows 117 individual ITM finishes for a combined $5,098,014. That puts her in the top 20 among Canadian players, and in the top 300 among all players.

It’s pretty fun winning a poker tournament! Won the @worldpokertour five diamond $5,200 event. Thankyou so much for all the support! ❤️🏆🤗😘

Kristen Bicknell has won 3 WSOP bracelets. This makes her tied in 1st place among female players, tied with Vanessa Selbst, who also has 3 WSOP golds.

Her first World Series cash was her first bracelet as well. In 2013, she won the $1,000 Ladies Event – the WSOP tourney which only female players can register for. She got $173,922 for that title.

Her second bracelet is from 2016. This time, she claimed that after beating a “co-ed” field in the $1,500 Bounty NLHE tournament. She beat the Hungarian Norbert Szecsi heads-up for the $290,768 first prize.

In 2020, when the coronavirus pandemic forced every World Series event to be played online, she managed to top an 892-player field in the $2,500 No Limit Hold’em 6-Handed event. She got awarded no less than $356,412 for her victory.

In January 2018 Bicknell appeared on PokerGO’s revived version of the classic poker show Poker After Dark during their “Femme Fatale” week. She played a $100/$200 NLHE cash game session on a live stream in an all-female line-up.

She considered it a great honor to appear on a PAD stream since, as we mentioned above, was a big fan of the original show, especially Jennifer Harman.

Bicknell started her poker career as an online MTT player. She began playing in 2006, during her freshman year in college under the screen name “krissyb24″ on PokerStars.

Overall, she has cashed for a total of $1,889,766 on her Stars account, according to PocketFives, a reliable online MTT database.

Her biggest single online tournament cash on that site is $269,011. She got that for finishing 4th in a $1,050 SCOOP (Spring Championship of Online Poker) NLHE Main Event in May 2019.

Despite all her success on Stars, she doesn’t actually have any WCOOP (World Championship of Online Poker) titles. Her highest finish in that famous online tournament series is 11th – she got that score in a $5,200 PLO event and earned $23,978 for it.

She started playing on partypoker in 2016. She uses the same moniker, krissyb24, in that online room as well. Her first cash on that account is a humble $45 she got after finishing 83rd in $22 tourney.

The second biggest online tournament payday of her career is on partypoker. In May 2018 she finished second in a $10K POWERFEST event and won $210,061.

She has more tournament earnings on partypoker than on PokerStars – and impressively she’s passed $1 million on both sites. On partypoker, she has won a total of $1,175,104 playing online MTT’s.

Bicknell started playing on GGPoker in May 2020. She passed the 7-figure mark on that site as well, in a matter of months.

She won her 3rd WSOP gold bracelet on GG as well. She took down the $2,500 No Limit Hold’em 6-Handed event for $356,412, which is the biggest single online MTT cash of her career to date.

In 2017, Kristen Bicknell joined Team partypoker, a group of poker pros who are signed to promote the online poker room.

Check out the promotion running where you can win a share of mine and other pros winnings! ⬇️https://t.co/kIWCbFwd4e pic.twitter.com/4Uf370BJhY

In June 2018, Bicknell and her boyfriend, Alex Foxen were accused of soft playing against each other in the $5K DeepStack Championship NLHE tournament. The couple both made it in the final 3 where they made plays that made quite a few people in the poker community suspicious, including Doug Polk and the eventual third place finisher himself, the Australian Kahle Burns.

Some people believe that GPI Female Poker Player of the Year Award, the award Bicknell won in 2018 and 2019, is also controversial. Some in the poker industry feel that it is redundant to award the best player in one sex, since men and women compete in the same competitions in poker, unlike in physical sports. Cate Hall was one of the people who voiced this opinion while receiving her award in 2017.