Another smashing week at Natural8 with the World Series of Poker Winter Online Circuit Series exceeding guarantees and awarding three more rings. The latest champions were Aleksey “ImLuckPads” Savenkov, Sihao “Mr_3rdBullet” Zhang, and Pulkit Goyal. At the WSOP #6: US$ 170 Mini Main Event, Day 2 wrapped up with the final 9 players led by Russia’s “CallMeBatya”.

With these new winners, that means five of the 18 WSOP circuit rings have now been claimed, one each for the countries of Uruguay, USA, Russia, India, and Luxembourg. The series kicked off on December 13 and will run until January 10. A massive 100 Million Dollars is guaranteed in combined ring events and side events. To date, US$ 12,373,915.20 in ring events and US$ 31,842,088.60 in side events have been paid out. More rings and cash to be won. Key events to mark down are the Christmas PLOSSUS, New Year COLOSSUS, and the star attraction, the US$ 1,700 Main Event US$ 10 Million guaranteed.

For players signed up on Natural8, exciting incentives are lined up if you champion any of the ring events. Players can win from US$ 5,000 to US$ 50,000 in WSOPC LiveX Live Event Sponsorship. For new players, make sure to sign up on Natural8 to also avail of the new player incentives. We’ve got all the info below including recaps on the events tabled.

Aside from winning events, the WSOPC Player of the Series race is also underway where a whopping US$ 100,000 will be awarded amongst the top 100 of the leaderboard at the end of the series. The player with the highest points accrued will receive US$ 10,000. Currently leading is Pascal Hartmann with 8,815.06 points.

The series kicked off with the most affordable event on the menu, the BIG $50, and as expected, it dragged everyone out of the woodwork for a final tally of 31,291 entrants. This bumped up the US$ 1M guarantee to a heavier US$ 1,439,386 prize pool of which 1,600 players (5%) earned a share. Day 2 closed with only 9 remaining out of the 3,345 qualifiers. The event resumed this past Saturday, concluding with Russia’s Aleksey “ImLuckPads” Savenkov locking up his first WSOP circuit ring and a career high US$ 168,810.38 payout.

Savenkov has a fairly young bio on The Hendon Mob with live cashes dating back only three years. In 2018, he earned his first five digit payout of US$ 18,507 for his 19th place finish at the EPT Sochi Main Event. This was his largest cash until he shipped the BIG $50. His win fattened up his WSOP total career winnings from US$ 21,802 to US$ 190,612.38.

The final table got underway with Russia’s Aleksey “ImLuckPads” Savenkov backed by a sizable chip advantage and China’s QY707 in second position. Both players stayed high up throughout and eventually faced off for the title. Before getting there, they each had their share of knock outs. Within the first hour of play, QY707 claimed his first of three victims in fellow countryman PhD_Don whom he booted in 9th place. Minutes after, ImLuckPads railed btn_clicking! (8th), then Otto “D00MSWITCHER” Lemke helped out by denying incloudzly (7th).

At six remaining, QY707 went on a hot run, scooping up several big pots that finished off FreddieKadur (6th) to take the lead. He proceeded to accumulate over half the chips in play after clearing out Adam Bonk (5th) and while it seemed he was on a straight path to victory, QY707’s game went cold opening the door for ImLuckPads and D00MSWITCHER. ImLuckPads eliminated fellow countryman party_maker1 (4th) for his second of four busts, and D00MSWITCHER won three chunky pots off QY707. D00MSWITCHER took the lead for the first time after doubling up off QY707 on a board

with the shoves seen on the turn. However, like QY707, D00MSWITCHER had difficulty at the top, losing multiple pots to both opponents to drop down in rank and fall in 3rd place with

. This brought about heads up with ImLuckPads backed by a sizable lead that QY707 couldn’t overcome. On the 119th hand of the final table, the last hand was tabled. ImLuckPads dominated with

The first Asia time friendly event was the US$ 800 Monster Stack No Limit Hold’em pulling in 1,395 entries for another guarantee smashing prize pool of US$ 1,060,200. After a lengthy ten and a half hours or so of play, Luxembourg’s Sihao Zhang stayed true to his nickname “Mr_3rdBullet”, making his third bullet the lucky charm. He shipped the title, the WSOP circuit ring, and the US$ 140,472.30 first prize. This was Zhang’s first ever known tournament victory and largest tournament score.

Six hours in, player “hangren” delivered a painful blow to “shreeOHM” on bubble time when

both paired up to crack

. With money guaranteed, the first to dip in the jar was two time WPT Asia Online Series winner Loris51 in 233rd place rapidly followed by a succession of bust outs. Among the top 100 in the money were Vincent “Peleus34” Li, Arthur “meiiYunqi” Conan, bracelet / ring holders Brian Green, Ravid “jerbi9999” Garbi, and Christian Jeppsson. Two and a half hours later, it was down to the final two tables with 16 remaining led by Brazil’s Maicon “21_Pirlo” Gasperin. 21_Pirlo held rank until Mr_3rdBullet eliminated three players which included Guillame Nolet in 10th place.

The final table ran for nearly one hour with chip leader Mr_3rdBullet commanding the action throughout. He railed six players on his path to victory starting with Korea’s Seungmook “7high” Jung (9th) with

spiking the eight to bad beat

. After Promoking eliminated Edeskie (8th), and 21_Pirlo ousted Kevin Pu (7th), Mr_3rdBullet emptied out the rest, ballooning to over half the chips in play when he denied Pur3WiT’s

Ace on the flop. Wei Zhao also met a hard fall with

. After sending 21_Pirlo out in 3rd place, Mr_3rdBullet entered the heads up round backed by a 5:1 chip advantage against Andrew Xu. While Xu impressively trimmed the gap to 2:1, Mr_3rdBullet had luck on his side when his

improved to trips eights to overtake

and capture his first ever WSOP circuit ring. This was the first ring for Luxembourg this series.

India also earned its first win this series when Pulkit Goyal overcame a deficit at heads up to defeat South Africa’s Rage Monkey1. Goyal ran away with the WSOP circuit ring and the US$ 82,052.44 first prize. This was Goyal’s largest known career win.

After three hours and 20 minutes of late registration, 1,041 took interest in the first PLO event of the series for a guarantee smashing prize pool of US$ 593,370. A generous 15 percent got paid, among them were well known pros and WSOP decorated players such as Dario Sammartino, Toby Lewis, Simon Lofberg, Yuri Dzivielevski, Ryan Riess, and Davidi Kitai to mention a few.

The battle for the ring took nearly two hours. Leading up to the final showdown between Goyal and Rage Monkey1, both players caused the downfall of others. Goyal booted out three players – Eduardo Pires (9th), SlonoSarSki (6th), and 1bloodflood (4th) – and Rage Monkey1 took out two – boryan4ik (5th) and Rossz (3rd). Rage Monkey1 entered heads up with more chips and chatted “if I can get 77K and the ring, then I’ll deal”. After looking at the ICM numbers, Rage Monkey1 declined and play resumed. Rage Monkey1 pulled away to a 4:1 advantage but couldn’t close it especially with the average stack still at a high 52 BB. Twenty minutes in, the tides switched. Goyal grinded to the chip lead and built a 2:1 advantage. From there, both players tugged at leadership until Goyal began to widen the gap to a 3:1 advantage. Goyal soon closed it out with

Drawing another monster field was the $170 Mini Main Event with 17,478 signing up across 39 starting days. Like all the completed events, this too crushed its US$ 2M guarantee for a bulkier US$ 2,733,559.20 prize pool. Only 10 percent of the field got paid with the largest cuts yet to be claimed. Last night, 2,703 players saddled up for Day 2 which wrapped up at the final 9 players led by Russia’s “CallMeBatya”. Running second was Greek pro Ioannis Konstas.

. Ten handed lasted nearly 20 minutes. CallMeBatya scored a large double up against zopino to take the lead. CallMeBatya went on to win a few more pots before Konstas eliminated Franco “pelaguacha” Spitale (10th) to close the day with the final 9 formed.

Starting days for the US$ 400 Christmas PLOSSUS event have begun. At the time of writing 412 have entered with 42 advancing to Day 2. Among the top 15 were Natural8 Team Hot Pro Kosei Ichinose, two time bracelet winner Juha Helppi, and bracelet and ring holder Chris Klodnicki. Leading the pack was Hungary’s B Sebestyen. 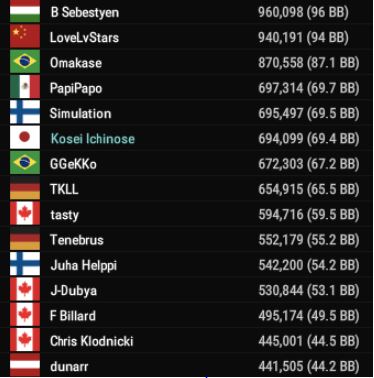 Play in the WSOP Winter Online Circuit on Natural8 for a chance to win BONUS WSOPC live event sponsorships worth up to $50,000.

Win the WSOPC Main Event to win $50,000 and become a member of the LiveX Crew. Sponsorship package includes:

Win a WSOPC Ring from any event with a buy-in of $1,000 and above, and you’ll get a LiveX Crew package that includes:

Win a WSOPC Ring from any event with a buy-in of $999 and below, and you’ll get a LiveX Crew package that includes:

Stay tuned to Somuchpoker as we bring you recaps of the 2021 WSOP Winter Circuit Online Series as it unfolds.