The popularity of poker in Malaysia is largely due to the influence of foreigners, but residents who discovered it in Hong Kong, Macau, and the Philippines, where Texas Hold’em and Omaha are popular, have also impacted its growth.

Contributing to the popularity of poker in Malaysia are its notorious international players. Malaysian poker players are known to make quite an impression on the Asian circuit—for instance in APL, APT, APPT and others—and figures such as Richard Yong, Ivan Leow, Paul Phua, and Michael Soyza regularly make our headlines.

The legal status of gambling and poker in Malaysia is—as in many neighbouring countries—quite unique. As a Muslim country, Malaysia obeys a very specific set of laws. While the Syariah Courts apply the Sharia to the nation’s Muslims, secular courts, which allow freedom of religion, apply to the rest of the population.

In March 2020 Malaysia’s booming poker community started to be served cash games. SkyCasino Gold Club located inside Genting Casino, Genting Highlands opened a poker room, that was the first to offer cash games in the country.

There are 4 cities with gambling facilities in Malaysia: Kuala Lumpur, Penang, Ipoh, and Genting Highlands, the latter being the only location in the country where you can play poker.

Malaysia has two sets of laws regarding gambling in general, which distinguish between Muslims and non-Muslims, regardless of their country of origin.

As a result, non-Muslim locals (such as Chinese and Indian minorities) and tourists over 21 have access to a fair amount of legal land-based gambling, with the exception of sports gambling, which is prohibited. In this particular example of “unlawful gambling”, gamblers face “a fine not exceeding 5000 ringgit or to imprisonment for a term not exceeding six months or to both.” Two hundred thousand ringgits and 5 years in jail are the price paid by anyone caught operating or patronizing a betting house.

The “religious law” or “Sharia”, on the other hand, consider gambling to be a serious crime that applies to any Muslim, whether they are local (60% of the population) or foreign. As such, numerous Indonesian and Pakistani men have been arrested for visiting casinos while on holiday.

The penalty for Muslims caught gambling in Malaysia is a fine up to 3000 ringgits, a 2-year prison sentence, or both. This penalty may vary in different states, of which there are 13 in Malaysia.

It should also be noted that in Malaysia all ethnic Malays are required by law to be Sunni Muslims, which automatically puts them in the category of people who must oblige the religious law of Sharia.

Such a system has, of course, been the subject of countless debate amongst its population. Nothing seems to be written in stone in Malaysia regarding gambling; however, it appears that the government sees the appeal of attracting tourists with casinos.

The only land-based legal option for playing poker in Malaysia is at Casino de Genting. The World Genting resort is located in the mountains, but it is about a one-hour train ride from the capital city of Kuala Lumpur. The Chinese population, ethnic minorities, and tourists comprise most of the poker scene there.

The games held in Genting are very limited, as only a few yearly tournaments offer Texas Hold’Em. The first prize for the biggest annual Malaysian poker tournament at the Genting is 50,000 Malaysian ringgits (around 12,000 USD).

Apart from those rare occasions, you will only find Progressive Texas Hold’em (against the dealer with bonus side bets as well) or Three Card Draw events. Genting is also known for providing their own, branded, “Caribbean” stud poker game.

Other tournaments happen in Malaysia, but they are considered illegal. Events like the Poker Malaysia Championship do not even advertise where they will take place until just before the event in order to keep from being shut down.

Finally, 2020 will see the arrival of a second solution for live poker in Malaysia with the maiden voyage of the Crusino, a cruise ship aiming to be the largest casino on the sea. Crusino will measure 295m long by 36m wide and will feature 1,330 rooms to welcome up to 3,200 passengers, including 900 crew members.

– Casinos and Poker Rooms in Malaysia – 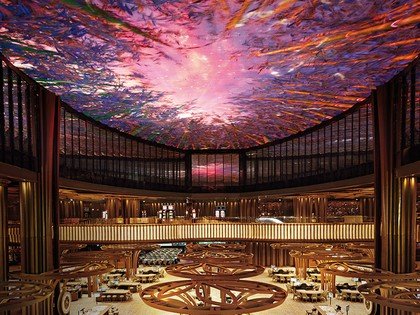 While technically illegal, online gambling is overlooked in Malaysia. Many inhabitants place bets over the Internet every day, and most of the major international betting sites accept customers from Malaysia. They might go as far as processing deposits and withdrawals in ringgits. It’s easy to get paid, make deposits, and play as long as you stick with the major names.

There are actually no specific references to online gambling in the Betting Act, and no relevant amendment has yet been made, so the market remains largely unregulated.

That being said, the Malaysian government does not issue any licenses for online casinos. However, banks are instructed not to sanction transfers to overseas online casinos.

The story is somewhat different for some Internet cafés across Malaysia that have become popular for illegal online and land-based gambling venues. In this case, the government has tried forcing banks to block transactions to and from foreign online poker rooms and has engaged in a number of lawsuits against involved Internet cafes.

Overall, Malaysian police forces are too busy to worry about people playing poker at home on the Internet (or even in private home games). To this day, no local has ever been punished for online poker in Malaysia.

However, that doesn’t mean you are completely risk-free in Malaysia, where the number of calls to ban online gambling is increasing.

In this article, we offer a list of the advantages and disadvantages of each online Poker Room currently accessible to Malaysian players in 2023.