Over the years, poker’s popularity has generated quite a bit of interest from celebrities. Here we introduce you to some of the most notable celebrities that you might find at poker table.

He made it to day two at the PokerStars Championship Bahamas in 2017. After busting nine players from the money, he lost to Daniel Colman before the bubble (A-9 vs Q-10).

Paul is also featured in a Pokerstars commercial, where he’s playing against football superstar Cristiano “CR7” Ronaldo to raise money for the Save the Children Foundation, which provides aid and relief to 127 million children in 120 countries.

When Kevin Hart played at the same table as Dan Bilzerian in 2016, Bilzerian tweeted a picture of them together, saying “This @KevinHart4real is so fucking bad at poker, a guy bets into him on the river, Kevin has quads & doesn’t raise him.“

He entered the $100K Super High Roller competition at PokerStars Championship Bahamas in 2017, but quickly lost. He rebought to play on day 2 but ultimately lost again. Nevertheless, such buy-ins are a drop in the ocean for Hart, who is number six on Forbes‘ 2016 World’s Highest-Paid Celebrities Top 100 List with $87.5 million in earnings.

Shortly after his appearance at PokerStars Championship Bahamas PokerStars decided to sponsor him.

During a high stakes game in Monte Carlo in January of 2018, Hart bluffed Negreanu in a hilarious hand, shouting “I bluffed Daniel! I bluffed Daniel!” According to Hart, “When you’re small and cute, you can do what you want. Nobody can get mad at the cute guy!“

At the PokerStars Championship Cash 2018, Hart won a $40k hand against Mila Monroe with a king high, but the reveal was confusing because Hart excitedly flipped his cards, claiming “straight” before he realized that he was very wrong. All he actually had was a king high, as confirmed by the dealer, but that’s all he needed to win the hand and bust Mila from the competition. He responded to the situation by saying “I’m not comfortable with that” and giving Mila $15,000 in chips to keep playing. 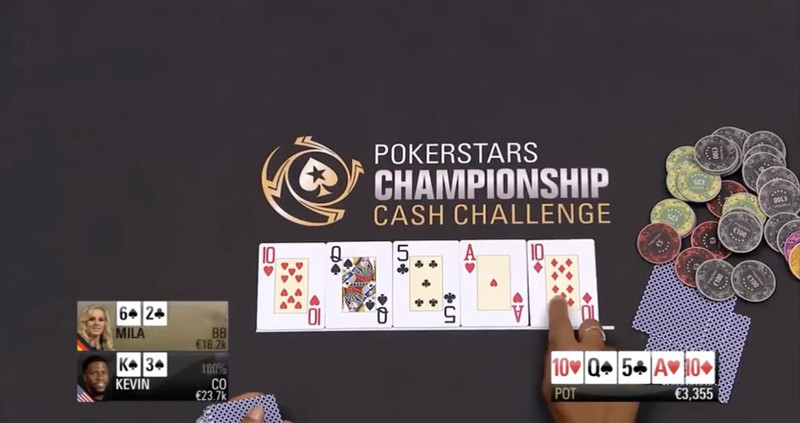 Also in 2018, Kevin Hart continued his poker feud against olympic champion and the world’s fastest man, Usain Bolt, who he faced off against in the #GameOn finale, playing NLH with $100,000 worth of chips. Negreanu was the commentator for the game.

As a PokerStars ambassador, Hart starred in a comedic video series titled “How to Play Poker” for the PokerStars School.

Quite a regular at high stakes cash games, Ben Affleck has won about $500k in face-to-face tournaments. He’s also received poker tutoring from some real pros, including Annie Duke and Amir Vahedi. His biggest win was $356,400, when he took down the 2004 California State Poker Champion.

At the 2009 WSOP he was beat badly when Harman Hachem moved all in and Affleck called with a pair of sixes and a set on the flop. Harman won on the river when he hit his flush with an ace high.

Although he shot down rumors of a gambling addiction in 2014, the Hard Rock Hotel & Casino in Vegas banned him for counting cards at a blackjack table. Nevertheless, he was spotted playing poker in May of 2014, and he also played alongside Tobey Maguire and Leonardo Dicaprio according to the Molly Bloom book published in 2014.

Allegedly, Affleck lost at least $400k while playing in this secret Hollywood poker ring. Rumors also suggest that Affleck’s divorce from Jennifer Garner in 2015 was at least partially caused by his gambling addiction.

Damon spent about $25k to get some experience handling himself at the poker table when he was preparing for his role in 1998 film Rounders. Since then, he’s played intermittently, even doing quite well in the 2008 and 2010 WSOP.

Although he hasn’t improved that much through his irregular play, earning only $14,500 in a couple of tournaments, he’s continued to take part in charity poker events when his schedule allows.

Unlike some of his friends, Damon has never been on any celebrity poker shows, but it’s been reported that he and long-time pal, Affleck, played in some invitation games of Texas Hold’em at luxury hotels. He’s also reportedly been seen playing in the games started by Brad Ruderman. Thus, it seems safe to assume that he likes to play among friends in more private events.

Nevertheless, he does occasionally hit the big events. For instance, his bad poker face earned him poker fame at the 2017 WSOP, where he hit nuts with a full house of tens by the sixes and ultimately had to play the hand slow by simply checking and calling.

Phelps, a 23-time gold medalist started participating in live poker events in 2008, and he appeared at his first WSOP in 2013.

In August 2016, Phelps attended the August Weekend Extravaganza in Vegas, where he entered the $250 No-Limit Hold’em event #3. Although he didn’t win a medal or it (not like he needed more medals anyway), he did finish in 18th place. It was also reported that he played poker on his phone prior to his Olympic events in Rio.

All things considered, Phelps remains relatively inexperienced and unproven at the poker table. He has one final table to his name, as well as only $8,383 in live earnings and $5,213 for his best cash. Nevertheless, the millionaire swim champ has plenty of money to play with and plenty of time on his hands now that he’s retired from swimming, so he could become a force in the future. In a 2008 interview with Card Player, Phelps admitted that he loves the game and suggested that he was eager to improve his skills in the future. Now that he’s retired from the sport that made him rich, he may be doing just that.

With the possibly the worst reputation of the group, Maguire seems to have largely dropped out of the poker scene after 2007; however, he was quite successful before slipping out of sight.

Maguire started playing in 2004, when he was coached by Daniel Negreanu. He had several successful public wins in both live and online games, and while pro Phil Hellmuth has suggested that Maguire’s won over $10 million in private games in Hollywood, Poker Central reports that he’s won at least $40 million. Indeed, Maguire once took the now disreputable Brad Ruderman for $311,300.

After the publication of Molly Bloom’s book in 2014, Maguire gained a rather negative reputation regarding his poker habits. According to Bloom, Maguire was “the worst tipper, the biggest winner and the absolute worst loser.” She wrote that he brought his own $17k card-shuffling machine and insisted that Bloom use it while also charging her a $200 rental fee each time it was used. Perhaps most ridiculously, Bloom recalled refusing Maguire’s demand that she “bark like a seal” for a poker chip.

Most recently, Maguire has become embroiled in a high-profile lawsuit involving Brad Ruderman, who is the hedge fund manager currently incarcerated for his orchestration of an enormous Ponzi scheme. During the FBI’s investigation of Ruderman, they discovered his connection to an underground Hollywood poker ring that met regularly between 2006 and 2009 at various locations around LA. According to their investigation, Ruderman lost over $25 million in his Ponzi scheme money playing in this ring that included Maguire, Matt Damon, Leonardo DiCaprio, Ben Affleck, and the teen heartthrob from Welcome Back Kotter, Gabe Kaplan.

Although Elizabeth first started playing poker with her family at a young age, those Texas games were all stud or draw games. As an adult, after she’d become an established member of the Hollywood elite, Elizabeth was introduced to Texas Hold’em, which she initially hated. According to Elizabeth, not having the opportunity to discard or draw new cards made the game less fun. However, after she started playing friendly games with poker pros Antonio Esfandiari and Phil Leak, as well as fellow actress Jennifer Tilly, in 2003, Elizabeth warmed to Texas Hold’em and began to hone her skills while learning from some great teachers.

A former fashion model who seamlessly transitioned to acting, Elizabeth can regularly be found at tournaments in Vegas. Having cashed five times in the WSOP (3 times in 2006, once in 2008, and once in 2010), Elizabeth is considered to be one of the best celebrity poker players in the world. Moreover, she’s shown expertise in a variety of games, including Hold’em, Stud, HORSE, and Heads-up.

Although Daniel Negreanu guided her through her first WSOP main event in 2005, she did not have much success. Nevertheless, she proved to be a fast study, finishing third in the 2007 invitation-only NBC National Heads-Up Championship, where she won $125,000, her best live cash on record.

In 2010, she placed second in the Ante Up for Africa Charity Poker Tournament and third in the NBC National Heads-Up Poker Championship.

Doug Polk was the commentator for this hand, where Elizabeth got bluffed:

Good friends with Maguire, DiCaprio was also a regular at Molly Bloom’s games when the group was just starting out. Bloom wrote, DiCaprio “had a strange style at the table. It was almost as if he wasn’t trying to win or lose. He folded most hands and listened to music on huge headphones.”

According to TV Producer Houston Curtis, speaking to the Observer, Maguire used his famous friend to “bait” whales to come to the table: “Tobey was basically paying their entry fee, and using Leo as a lure to get these billionaires like Alec Gores and Andy Beal to come to the games.” Regardless of the relationship between the two, DiCaprio played games with a buy-in of up to $100,000.

Having befriended poker legend, Doyle Brunson, DiCaprio has also has been seen playing at the Venetian in Vegas. His non-profit focused on raising environmental awareness, the DiCaprio Foundation, also auctioned off a night of poker with Edward Norton (from Rounders) for $121,000 in 2016.