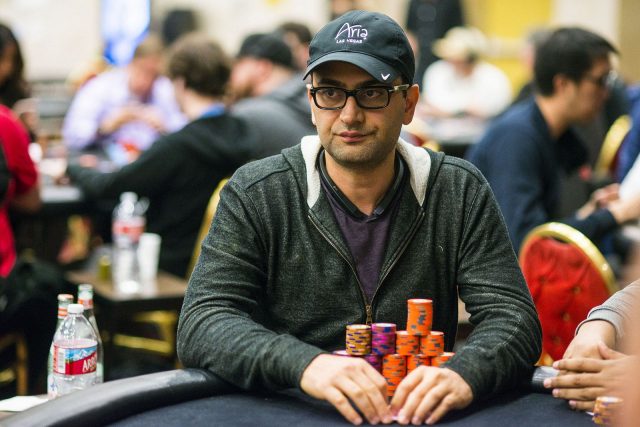 Antonio Esfandiari is an Iranian-American professional poker player. He was born on December 8th, 1978 in Tehran, Iran.

Overall, Esfandiari has cashed for $27.811 million in live tournaments during his long career. He has 3 WSOP gold bracelets. Also, he’s appeared on classic poker TV shows such as Poker After Dark on NBC and High Stakes Poker on The Game Show Network.

Before getting into professional poker, Esfandiari worked as a magician – hence his nickname, “The Magician”.

Antonio was born as Amir Esfandiary in Tehran, Iran. When he was 9 years old, his father brought the family to California, away from war and destruction. His mother left and Antonio’s father raised the two brothers by himself, becoming Antonio’s hero.

Being an immigrant and looking very different from his schoolmates, Antonio worked hard to fit in and be one of the cool kids. He tried too hard.

At the end of high school he got busted by the police for dealing pot in school. He was briefly in jail and swore to himself and his dad to never do anything illegal again.

He tidied himself up and got to work. He loved cards, and after he saw a magic trick performed in front of his eyes, he needed to know everything about it. He learned and practiced and anybody he met got to see a magic trick.

When things got more serious and he started making money with magic, he decided to change his name from Amir to Antonio to sound less “gypsy”. At the same time, he had a nose job done to look less foreign.

While he was making money performing magic, he got introduced to poker. A roommate gave him a poker book to read (“Winning Low Limit Hold’em” by Lee Jones). He devoured it and immediately started crushing in cash games, understanding nuances of the game, that nobody else around him did.

He juggled working as a waiter and playing poker for a while before deciding to try his luck in Vegas and play with the big boys.

Little did he know that he would come back as a big boy himself. He went on to win the televised 2004 WPT L.A. Poker Classics for close to $1.4 million and became an instant celebrity.

Antonio manifested this status by winning his first WSOP bracelet just a few months later. He finished first in the $2,000 Pot Limit Hold’em event for $184,860.

All that success went a little to his head and the Vegas lifestyle also caught up with him. His apartment was the party pad for all his friends. They even had keys to come and go as they pleased. An extreme highlight occurred when he let Dan Bilzerian shoot him in the chest, wearing a bulletproof vest. It seemed Antonio had lost his way and his poker enthusiasm.

Finally in 2010, he managed to celebrate his comeback, winning another WPT title, and two years later achieved the highlight of his career and poker immortality by winning the $1 Million buy-in “Big One For One Drop” event for $18,346,673. It was the biggest ever won amount in a poker tournament at the time. After a noisy and jubilant celebration with his friends he hugged his dad and the microphones caught him say “this is for you”.

Esfandiari has appeared on numerous TV shows and online streams where he played high stakes cash games live in front of the cameras. These shows include Poker After Dark (both the classic run on NBC and the revived version by PokerGO), High Stakes Poker on the Game Show Network, and Poker Night in America on CBS Sports.

Antonio went on to become a dad in 2015. He said it has changed his life and that he is crying every day out of happiness and gratefulness.

This didn’t stop him to get out of line once more at the PCA in 2016 getting disqualified for peeing in a bottle at the poker table after a bet with Bill Perkins had him lunge everywhere for two days and he was unable to move to the toilet fast enough not to miss a hand.

Esfandiari used to be sponsored by the now defunct online poker room UltimatePoker. He’s also been featured in an ad for the poker staking platform StakeKings.