After 11 days of thrilling live poker action in Taiwan, the first ever GPI Asia Festival came to a close. Taking place at the Chinese Texas Hold’em Association (CTP Club) from April 8 to April 18, the series was truly one of a kind with four varied tournaments merged to create one big poker celebration. Among the lineup of winners were Ta Wei Tou, Cheng Hung Chen, Team King Queen Suited, Yu Chung “Nevan” Chang who claimed two events – the first ever The Hendon Mob Championship in Asia and the MPS High Roller Six Max, and Chia Yun Wu who won Player of the Series. Other multiple event winners were Kristof Seger, Tung Yang Lin, and Li Min Kao.

In addition to tournament winners, one of the most anticipated moments was the GPI Masterboard Award Ceremony which took place on April 10. A total of 12 categories were recognized. Two players, namely Shih Kai Chiu and Wei Yuan Nien, bagged two awards each.

Here’s a look at all the top winners of the festival.

At the completion of two starting days, a combined 1,372 entered which was just enough to beat last year’s 1,345 attendance. The prize pool was impressive as well, ballooning to NT$ 4,939,200 (~US$ 175,860) with 164 players claiming a cut. For Day 2, the qualifiers came together at CTP Club Taipei where they raced to the finish. Cheng Hung Chen came out victorious to capture the burly NT$ 800,000 (~US$ 28,485) first prize. With only one prior live cash recorded, this score was Chen’s first and largest.

Yu Chung “Nevan” Chang took down two of the festival’s biggest events, the THM Championship and the MPS High Roller Six Max for a combined NT$ 564,400 (~US$ 20,100) in winnings.

For the final eight days, the Master Poker Series added to the festival thrill with 20 games scheduled from April 11 to 18. Headlining the series was the NT$ 1.5 million guaranteed Main Event won by Ta Wei Tou. Other big winners were Yu Chung “Nevan” Chang who shipped the High Roller 6 Max for his second festival win (Chung won the THM Championship) and Kristof Segers who claimed both installments of the Single Day Deepstack Event. We’ve got those results for you listed below.

Ta Wei Tou has had his fair share of wins and deep runs at various tournaments held around Asia, USA, and in Australia. His largest takedown was in May 2019 at the All Japan Poker Championship Main Event in Incheon, Korea for a payout of ~US$ 32,348. Earlier that year, he finished 4th at the 2019 Aussie Millions A$ 1,150 No Limit Hold’em Six Max for ~US$ 25,834. Up until this festival, his victory hunt on home soil only reached as far as 3rd place, however, he did pocket a slightly larger NT$ 565,500 at the J88Poker Tour Taiwan Main Event in December 2018.

for a crushing two pair to the leader and the win. Runner-up Wu may have missed the glory here however he earned the most points in the festival to win Player of the Series.

Player of the Series winners

To close out the festival, the top three players in points were recognized for their performance. It was a very tight race for the title which was ultimately won by Chia Yun Wu who edged Kristof Segers by a very tiny margin. 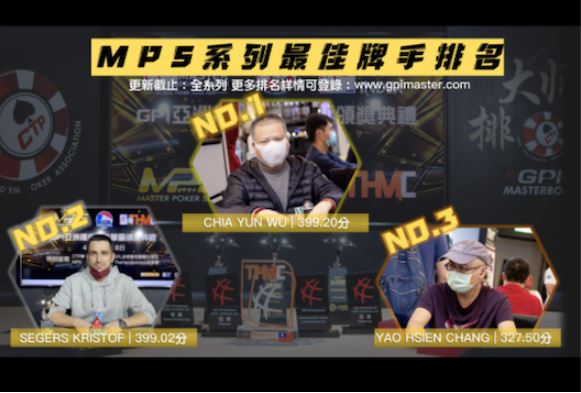