The much awaited 2020 World Series of Poker US$ 10,000 No Limit Hold’em World Championship international segment set sail last night on Natural8 – GG Network with 246 players taking on Day 1A. At the end of scheduled play, 62 players remained led by Germany’s Julian Menhardt “VWgunther”. Also securing seats to the next round were bracelet winners Yuri Dzivielevski, Daniel Dvoress, and Georgios Sotiropoulos “G Manousos”. All of the day’s survivors take a week break, returning on December 8 @ 0200 HKT. For now, let us give you a rundown of the action, on the players that survived and on those that crashed. For all you railbirds and fence-sitters, we’ve also included the schedule down below.

The bar has been set for the next starting day with Germany’s Julian Menhardt “VWgunther” stealing the spotlight on the final hand of Day 1A. With the clock down to 00:00, and all other tables wrapped up, action was still going at one table. Small blind Amichai Barer raised from 4,000 to 14,400, big blind Menhardt defended. At the flop,

, Barer shoved, Menhardt tanked, then opted to call leaving himself 5 BB. Barer was ahead with

two pair, the river slapped down the winning two outer

for a higher full house to Menhardt. Menhardt closed the heat with a commanding 534,490 in chips, the only player from Day 1A with over 100 BB into Day 2.

Among those joining Menhardt into Day 2 were three WSOP bracelet holders namely, two time bracelet winner Yuri Dzivielevski, Natural8 Team Bling member Daniel Dvoress, and Georgios Sotiropoulos “G Manousos”. Though we didn’t get much action on Dzivielevski and Sotiropoulos, we caught a good one on Dvoress. The Canadian pro shipped Armaan “entheogen” Kochhar’s stack in Level 14 when

On the flip side, so it was the downfall of numerous WSOP decorated players. Of the 246 that entered, 19 were a mix of bracelet and ring holders. The most famous was Jerry Yang, the 2007 WSOP Main Event champion looking to lock up a second gold. However, it was not to be. Yang jumped in on Level 2, proceeded to sit out, then started playing after registration closed with only 9 big blinds left. The uphill climb was a struggle. Although Yang managed to bring his stack up to 20 BB, he was stopped by Toshiyuki Onda “dmind1106” in Level 13.

The first WSOP champion casualty was in Level 3. Israel’s double bracelet winner Timur Margolin “Avocado Love” was down in chips and risked it all with

. Margolin was just the third player of the tournament to be eliminated.

Level 7 was the doomsday round for a few champions. Among the fallen was two time bracelet winner Fedor Holz who was sitting on a decent stack before it all emptied out in a sick hand against player “RandyLew!”. Both players had a full house on the river. RandyLew! shoved, Holz called for his tournament life with the lower spread. Julien Martini and Chris Rudolph also fell in this round. 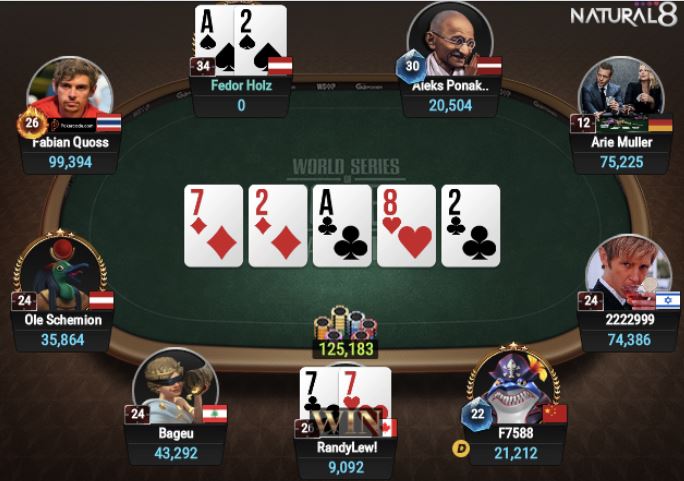 For India’s Aditya Sushant “inonhmeansfu”, he was down to less than 20 BB in Level 11 when he risked it with

found a king on the board to ship it all. The last of the champions to fall was Huahuan Feng “F7588” who tumbled out on the final round of the day to Simone Speranza “spera91”. Feng’s last stand was

that missed for Speranza’s

to hold and even improve to a straight.

Day 1A opened with mostly light action on the first round. Players started with 60,000 chips which was 300x the opening big blind. WSOP champion Chris Rudolph took the early lead with A5o landing trip fives to take a chunk from Ritza with AKo two pair. The first bust out happened in Level 2. Player “juco” won a three way showdown with

. The latter fell while Rudolph nursed a short stack before exiting in Level 7. “Juco” held the chip lead through the first and second break, falling to second rank on the third and fourth break. By the fifth break, juco was running fifth as other players began to ascend. After the sixth break, registration closed with 246 players, 138 remaining.

set over mid pair. On the final round, Botteon denied Kai Gao “3bngws” with

spiking a King against

Another player causing havoc during the final round was Paul Esau “AsiaStylez”. He stormed to second rank when he cracked Artur Martirosian’s

full house on a board

Ranked third was Dirk Gerritse with 457,197 in chips. By the seventh break of the day, Gerritse had driven his stack into the top 5. One of his later victims was Pokerthrone with AJs dominating A10s throughout. For fourth ranked Prebben Stokkan, it was a good day all around. Midway, he was already in the top 10. One of his scoops was in Level 15, railing Ken Okada “diabloking” with

The highest ranked qualifier from Asia Pacific was China’s “sunnyzyang1982” with 441,981 in chips. Other qualifiers from the region were Sosia Jiang “Aunty_Ninja”, ccccf, BorisLeBlade, Peiyuan Sun “fish3098”, Zhiao He “KingChips”, Shahar Levi “levinson95”, Toshiyuki Onda “dmind1106”, MoneyHeist, Kai Liu “lyn22336688”, Xiaqing Ji “qingxiaji”, Cloudstar, and Shai Goldberg “Rndr 1”. As for Japanese pop star Gakuto Oshiro “GACKT”, his dream of a championship gold would have to wait. He seesawed all day then banged the rail in Level 10.

The international segment of the 2020 WSOP Main Event continues next weekend with another two starting days to complete before moving on to Day 2, the Final Table, and the Heads Up Championship. As always, it is a US$ 10,000 buy in freezeout tournament. The pot is currently at US$ 2,419,200.

For those looking to jump in for cheap, step satellites begin as low as US$ .50 and direct satellites start at US$ 54. Games run continuously on the site with over 500 tickets ready for the taking. To give you an idea of how popular these satellites are, 32 of the Day 2 qualifiers won their seats via satellites, including race leader Julian Menhardt “VWgunther”. Just as impressive was player “majestre” who qualified to Day 1A on a lowly US$ 20 step satellite that fed into a US$ 200 direct satellite. Majestre advanced to Day 2.

To adjust to the current global health crisis, this year’s format has been tweaked. For the first time in history, the Main Event is a hybrid tournament running on two online platforms before transitioning to the live felt. International action is hosted on Natural8 – GGNetwork and initial domestic segment action is on WSOP.com, though the latter is restricted to players geolocated in US states Nevada and New Jersey. Domestic segment schedule on WSOP.com:

Both segments will run the same structure. Starting stack is 60,000 with 100-200 opening blinds and level intervals running a lengthy 30 minutes. Late registration is open for six hours. Starting days conclude at the end of Level 16. For those that advance to Day 2, it plays down to the Final 9.

Once the final tables have been reached, the live portion begins. The international final 9 players fly to King’s Casino in Rozvadov, Czech Republic and the domestic final 9 players head to the Rio All-Suites Hotel & Casino in Las Vegas where they battle for their respective segment’s Main Event titles. To complete the event, the champions of each segment face off live for one final duel on December 30 in Las Vegas for the 51st WSOP Main Event Championship title. The ultimate champion will claim the WSOP Main Event champion’s gold bracelet and the added $1,000,000 courtesy of Caesars Entertainment, Inc. and GGPoker.

If you haven’t signed up yet to Natural8, the time to do so is now. Natural8 is offering an exciting Main Event promo for all its members, a Team Bling Sponsorship worth up to a whopping US$ 100,000. Team Bling was formed during the 51st WSOP. Each Natural8 – WSOP bracelet winner was inducted into the team and awarded sponsorship packages. To be part of this exclusive band of champions, just sign up to Natural8 and win the international WSOP Main Event Final Table for a US$ 30,000 Team Bling Sponsorship. An added US$ 70,000 sponsorship and Team Bling captainship when you win the Heads Up Championship.

Stick with us at Somuchpoker as we bring you recaps of the WSOP 2020 Main Event as it unfolds.