Rest of the World
September 20, 2016 by Craig Bradshaw

In 2016, Full Tilt was of course closed down and the player pool merged into PokerStars, and since then Isildur has struggled.

Not only is Isildur1 down by $735K, but he has also been reloading for unusually small amounts. It’s almost as if he is somehow limited in what he can bring, or wants to bring to the table. This has been causing rail-birds to question whether he has some sort of restriction imposed upon his account, with many joking that he may have a cap on his own daily deposit amounts.

Everyone knows about Isildur1‘s qualities as a cash game player and the special place he has in the history of online poker, but he also has a good track record in tournaments too. 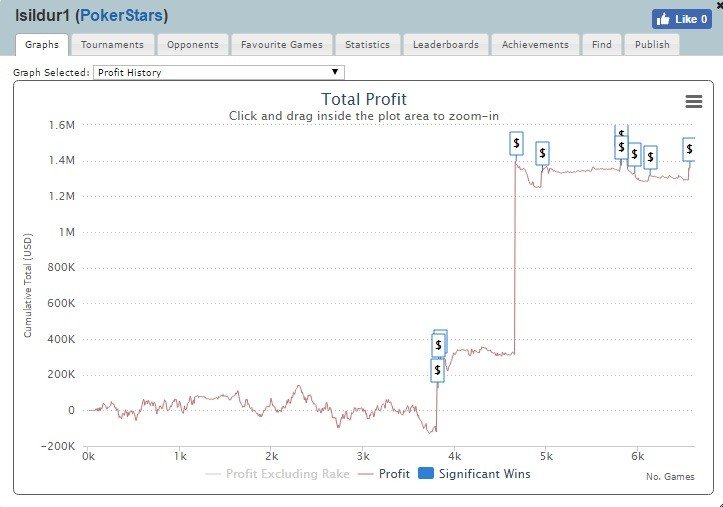 His tendency to rise to the big occasions was never more evident than in 2013 when he won the SCOOP Main Event High for over $1 million.

The identity of Viktor Blom is not a secret on PokerStars, and every player that he plays against already knows a lot about him. His former PokerStars sponsorship has long since finished however, and now that he is a free agent he can create new accounts on other networks and have the advantage of some level of anonymity.

There have been unconfirmed reports that he was playing on Microgaming network in December under the nickname “Hrskar”. If he was able to find action there in games that were softer than he is accustomed to then it would be no surprise to see him playing there more often.

In a time where most pros are working harder than ever away from the table to refine their play and make themselves as close to optimal as humanly possible, while playing against the weakest opponents they can find, Isildur1 is a little different. In each variant of poker that he learns, he sits against the best players and improves rapidly through his own experiences.

Isildur1 has survived so far through his natural abilities and a willingness to learn by fighting against the specialists in each game, but in a world where players are becoming more mathematically perfect and getting closer to optimal game theory play, can Isildur1 really stand the test of time?

Read more: The legend of Isildur1 in 7 dates