Last May, Vietnam took it's first tentative steps into the live tournament world, hosting at Ho Tram Resort Casino, APT Vietnam, the first ever international poker tournament within the country. With Vietnamese locals unable to participate and casino located 2 hours far from Ho Chi Minh City, it is always a challenge to turn such kind of event into a success, but the organisers are working on a long term plan.

The goal of this inaugural Vietnam Poker Cup is to give players living in Vietnam the chance to play tournaments with great structure, organised in a professional way, and in the beautiful location that is Ho Tram. Before now, players who wanted a tournament that reaches international high quality standards would be forced to travel to Macau, Manila or Cambodia, but this is no longer the case.

Event 1 of the Vietnam Poker Cup which took place yesterday, has already surpassed the hopes of organisers, as 68 players bought in for $165. It was Hong Kong Nguyen who took the first victory of the series, with the final table going on until 5am. He picked up USD$2,920 for his efforts. Co founder of Somuchpoker, Denis Pham also featured at the final table, finishing an admirable 5th place. 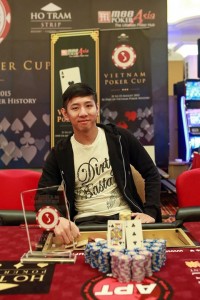 59 entrees in the Main Event

The Main Event is the eagerly awaited focal point of this series. 59 players bought in today. Entries are allowed up until the start of day 2, which means this number is expected to rise slightly. Among the field of players are Men 'The Master' Nguyen and Norbert Koh, and there are sure to be few more familiar names arriving as the tables continue to fill with new entries tomorrow. The sponsor who has stepped forward to support this event – M88PokerAsia has kindly raised both the profile of the event, and the prize money involved, by adding an extra USD$8,800 to the prize pool and sponsoring the player party. This has added to the value and the excitement surrounding the tournament.

59 entrees in the Main Event so far

Talking about the Event with Somuchpoker Andrew Scott said that “I am really satisfied  with the turnout so far”. He added that “Poker in Ho Tram is a long term plan and regulars events like the Vietnam Poker Cup are essential to the future success of the poker room”