As the impact of the global pandemic continues to persist, multiple businesses forced to temporarily shut down are suffering damaging losses due to limited income incurred for the time being. The gaming industry especially, has been hit hard with this unfortunate situation as no operations have been allowed for more than two months in efforts to curb the spread of the virus. While the tally of confirmed cases in the Philippines remains steadily on the rise, the government has deemed it acceptable to shift from the current Enhanced Community Quarantine (ECQ) with all non-essential work and travel prohibited to a more relaxed General Community Quarantine (GCQ) beginning next month.

With the country slowly easing restrictions on non-essential businesses, major local casinos in the capital of Manila have taken the down time to prepare for their anticipated reopening. Solaire Resort & Casino, City of Dreams Manila, Okada Manila, and Resorts World Manila, most of which are located within the vicinity of the Entertainment City, are the four notable integrated resort casinos mainly visited in the metro. All properties, considered as non-essential businesses, have been advised to close its doors to the public since March 16th and have been directed to remain as such ideally until mid-June.

Bloomberry Resorts Corp, operator of Solaire Resort & Casino, reported a drastic drop in profits for the first quarter of the year. Financial results showed Solaire‘s gross gaming revenue for the period to have slipped 10% year-on-year to P12.2 billion after its operations were suspended. Despite the losses, the casino management had been focusing on safety and sanitation initiatives to protect both staff and guests from possible transmission. The casino, in the beginning of its reopening, will only permit 20% of the gaming tables hosted at the property and 30% of electronic gaming machine capacity.

“For now, our team members are undergoing regular testing as part of a comprehensive plan to maintain safe working and recreational environments at Solaire,” Company Chair and Chief Executive Enrique Razon Jr., said.

“Our stringent regimen of safety measures will be world class examples of the safe re-opening of entertainment venues and of kickstarting the local economy to return the livelihoods of our communities,” he added.

City of Dreams, owned by Melco Resorts & Entertainment, is also ready to reopen once given the green light. The luxury property began its preparation by providing antibody rapid testing and on-site housing for staff members. Social distancing measures and facilities including testing booths have also been set up in the establishment based on the standards required by the Department of Health. Enhanced disinfecting and screening protocols will likewise be implemented in promotion of public safety and health.

“When given the permission to operate, we are ready to open our doors though on reduced capacity – both in gaming and hospitality – to provide our colleagues and guests the safest environment possible,” Chief Operating Officer of City of Dreams Manila, Kevin Benning said in a statement.

“The wellbeing of our colleagues is our paramount concern, more so in these fragile times.”, he added.

Okada Manila to Lay Off Over 1,000 Employees 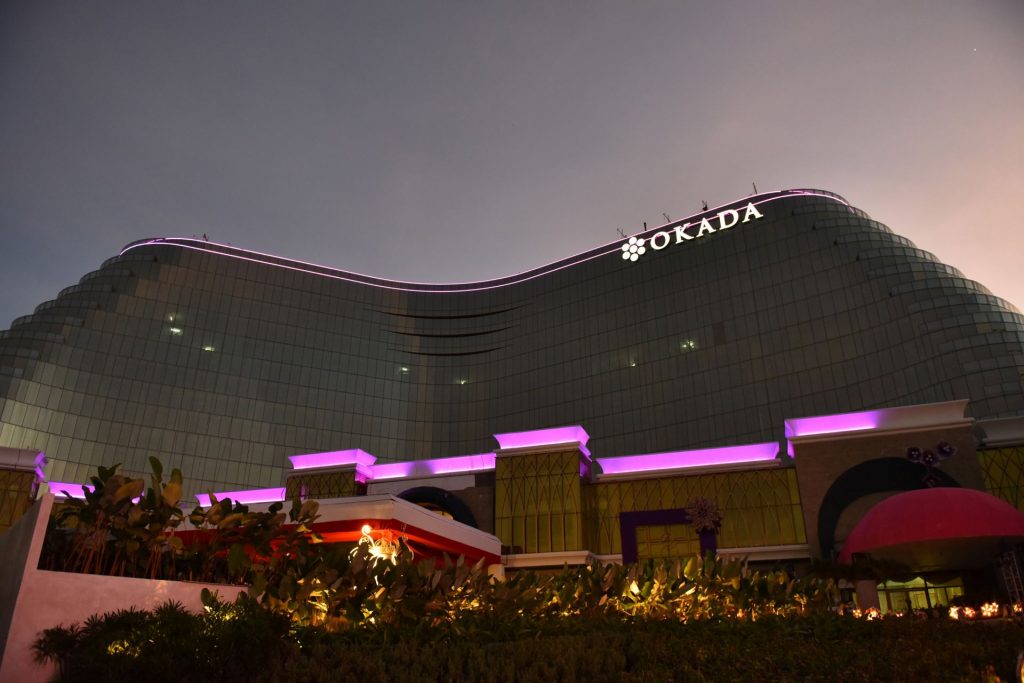 While City of Dreams recently revealed granting a month’s pay to all of their non-management staff amid the outbreak, casino operator Okada Manila turned to a different route and announced laying off more than 1,000 employees starting on June 15. The reduction of workforce through a retrenchment program was brought about by the damaging losses and no revenue incurred for the recent months.

“Not having any revenues since the lockdown has been financially draining and caused severe losses to the company, and if this is not addressed, its losses will pile up,” said Takashi Oya, President of Okada Manila in an email.

The integrated resort however, will change the way it does business and carry on “to build Okada Manila’s readiness to the new normal and provide the same 5-star experience that it is known for,” with the reduced staff. In an official post from the property, it assured its visitors that preparations are in line to ensure the safety of everyone involved.

“Okada Manila remains vigilant and committed to making sure that its team members are safe as they continue to work in the premises of the integrated resort. Moreover, Okada Manila aims to maintain the highest standard in the implementation of its for safety and health measures as it prepares to welcome its visitors and guests once the ECQ is lifted.”

While local businesses remain closed during the imposed lockdown, the Philippine government officially permitted Philippines Offshore Gaming Operators or otherwise known as POGOs to resume operations under specific conditions. Endorsing the Chinese-run online casinos as essential businesses, many politicians as well as citizens have voiced their disagreement with the seemingly unfair decision.

Gaming authoritative body Philippine Amusement and Gaming Corporation (PAGCOR) shared its defense in supporting these growing networks in the country saying, “These revenues are over and above the other fees and taxes imposed by other agencies such as the Bureau of Internal Revenue for their corporate taxes and the employees’ income tax, the Bureau of Immigration for their visa fees, the Local Government Units for their local taxes and fees imposed by other agencies,”.

Leading politicians criticized the present administration for favoring these offshore gambling sites which are largely suspected to be a “source of unimaginable corruption.” In spite of being allowed to resume operations, the POGOs were required to fulfill their tax obligations as part of the “stringent conditions” imposed. Three weeks after the government passed its decision, the Bureau of Internal Revenue (BIR) revealed that not a single operator fully paid their tax dues.

As a consequence, any POGO or service provider that is found to be operating at this time will be deemed illegal and will be shut down by the authorities, as relayed by Arnel Guballa, BIR Deputy Commissioner and POGO Task Force Head. Currently, there are 218 POGO service providers registered with the BIR which employs a combined over 100,000 foreign employees. According to PAGCOR Chief Andrea Domingo, the suspension of POGO operations deprived the local government of Php 600 million in monthly income which could ultimately be funds intended to combat the pandemic.