After being the last local hopeful standing in the inaugural 2014 World Poker Tour (WPT) National Philippines—Finishing sixth in the Main Event for a payday of $30,778—Andrew Gaw is the first of the Filipinos seeing action in the ongoing World Series of Poker (WSOP) to make a splash, cashing twice already in the annual “Olympics” of the sport.

Gaw, a Pangasinan native from Makati City, has been in Las Vegas for the WSOP since June 5. He has since played a total of nine events already and had performed well enough to cash in the $1,500 NLHE 6-Max (Event #34) last June 16th, finishing third and raking in $109,015 for his efforts. He also cashed in the $2,500 NLHE (Event #47) a full week later for $5,292.
The dual cashes catapulted Gaw from thirteenth on the hendonmob.com Philippine all-time money list to fourth, behind WPT winner Noli Francisco—whose last official cash was almost a decade ago—former Asian champion and APT high-roller veteran Neil Arce and The multi-titled John Tech. Originally , Gaw was slated to take part in a phalanx of side events leading up to the Main Event in July but has decided against it. “It’s not really worth playing long runs because thirty percent is deducted from the prize money that is $7,000 and above,” Gaw said in the vernacular in an online interview. “When I lose, it’s the whole thing.” But while Gaw has been the lone bright spot for the Philippines in the WSOP thus far, “reinforcements” have arrived last June 27th in the form of Tech and tournament hotshot Lester Edoc. While other Filipinos such as Michael Cua (seventh on the hendonmob ALL-time Philippines money list),William Te (fourteenth), Boyet Drilon (27th), and seasoned Filipino Poker Tour (FPT) regular Willie Aguas have also been busy at the tournament tables, Gaw is the only one to have brought good news from overseas in 2015. 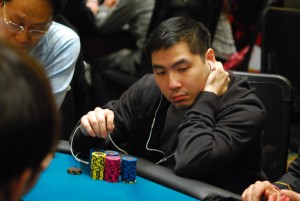 With Tech and Edoc entering the picture, the Philippines could yet be making some news in the days to come. Tech, a 30-year-old from Pasig City, has been tearing it up in the international tournament scene since 2009. He’s had 37 total cashes including wins in the 2013 APT Manila Deep Stack Turbo event, the 2014 WPT National Philippines Deep Stack Turbo event, the 2014 APT Manila High-Roller event, and the 2014 APT Cebu Main Event. He’s also done the rounds in Macau and has had six cashes in the WSOP since he first emerged in 2013.

Edoc for his part, has successfully transitioned from his kingdom in the online realm to become known as one of the sharks of the tournament scene. He is currently ranked second on the APT Player of the Year Race, just behind perennial winner Sam Razavi. The Baguio City native has 32 recorded cashes since 2009, but most of them coming in the Asian tournament circuits.
In 2010, Edoc finished eighteenth in the Red Dragon NLHE Event and most recently snared third place in the inaugural APT Vietnam in the Deep Stack Hyper-Turbo. He has five championship trophies in the APT and cashed twice in the 2013 WSOP.

While it is still uncertain if the likes of Neil Arce, 2012’s two-day overall WSOP Main Event chip-leader Jay Lubas and red hot Flo Campomanes (5th on all-time money list, coming off a Final Table performance in APPT MACAU this year) will make the journey to The Rio this year, the Philippines hopes to have enough to make its presence felt on the world poker stage with three of the hottest poker commodities from the country today in Gaw, Tech, and Edoc, Lubas came close once. Arce has been the deepest casher, and Noli Francisco is history. Can this new generation of Filipino Poker Pros make a mark?

As reported by KomishAirms, Philippines