This week, news broke of the passing of a poker enthusiast and comedic great. Sam Simon, who co created ‘The Simpsons,’ lost his ongoing struggle with colon cancer, which he had been fighting since 2012. It speaks volumes about the man that upon being diagnosed, he decided to give his entire fortune of countless millions of dollars to charity. He had been a regular face at the WSOP for several years, and had made a televised appearance on High Stakes Poker too. 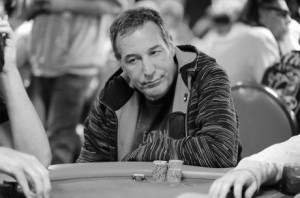 Sam Simon was a regular face at the WSOP (Photo Pokernews)

In a Marysville trailer park in Washington, the police last week apprehended a suspect in the robbery of a nearby bank. Matching the description of the robber and being found crouching in the bushes clutching $7,000 cash, he will probably be needing a good lawyer if he wishes to dispute the allegation. Upon arrival at the police station, the man told a curious story of how he had one day realised his life was going nowhere and decided to empty his bank accounts of $8,000 and fly to Washington to visit a casino and play poker. One short down swing later, and the man (now broke) decided to follow up his initial good plan with a better one, and rob a local bank to re float his funds. Perhaps he had heard people talk about ‘bankroll management’ and had simply misunderstood how it works. After investigating further, suspicions were raised about where he had come by the $8,000 he had brought with him to Washington. Presumably his own bank account details didn’t match up with his story. He is now the prime suspect in a second bank robbery in his home state of Texas.

Pro poker player Matt Kirk was the victim of a costly theft back in January when USD$420,000 worth of chips were stolen from his apartment. On Monday, 32 year old Dustin Campbell from Illinois, was arrested for the theft. He was found by police to be in possession of $40,000 cash and $20,000 worth of chips.

Daniel Alei tweeted about the robbery on january  29.

Poker legend Doyle Brunson has not had the easiest of times with his health through the decades, but has once again shown that nothing can hold him back, much to the relief of the poker world. Reports had surfaced of Brunson being treated for skin cancer, but his recent tweets have shown the growths have been removed from the top of his head, and the outlook seems to be positive. This was the 12th operation he has undergone in his life, and thankfully, despite his advancing years, he appears to be overcoming this latest health hurdle.