The latest edition of the Red Dragon saw a final table strewn with interesting talents and potential upsets. In many ways it was an exciting final table, which lived up to a very memorable, record breaking event. With 1,075 runners having bought in, this was the largest ever live field for an Asia-Pacific freezout tournament. Quite the fitting send off for departing APPT president, Danny McDonagh.

At the start of this final table, we saw three stacks which had broken away from the rest of the field a little, with Liang Xu leading with 3,375,000 – Takashi Ogura and Ying Lin Chua were in hot pursuit with close to 2,700,000. 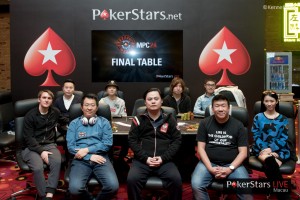 After play had commenced, Xu briefly extended his chiplead, before the active Chua surpassed him soon after. Yongqiang Huang was our first casualty of the day, unable to to drag his stack back up towards safety. Alner followed him out the door shortly after. Yang Zhang was next to exit the action, leaving six players in contention. Liang Xu was holding steady at 3,845,000 while Ying Lin Chua had been busy hoovering up the chips, and had built a commanding stack of 5,595,000.

Fan Xie managed a creditable 6th place some time later when she ran into trips on the flop, and Chengbei Lei, who had endured a very up and down afternoon – finished 5th. Former chip leader Liang Xu eventually busted in 4th, and the three remaining players managed to strike a deal for most of the money. Wayne Zhang then got very busy, and ran into trouble, crippling himself to 2 BB's. Back he came though, doubling and tripling up, and leaving Takashi Ogura to walk away from the table in 3rd place.

Ying Lin Chua carried a 10 to 1 chip advantage going into heads up, and quickly dispatched Zhang, taking the title, the famous trophy, and HK$1,904,000 ($245,300). He is also awarded an ACOP main event ticket, worth HK$100,000. After winning the WPT Manila Main Event just two months ago, he now adds another impressive score to the USD$86,000 he took home that day.

Here are the final standings and payouts:

Players made a 3 way deal*