The best of the Asian players on the circuit arrived in Manila this week for the Manila Megastack 2. The first Megastack event in Manila had been a relative success, but expectations were higher this time around. The event delivered on hopes of a decent sized field, with 76 players buying in, comfortably surpassing the 61 players who entered the first Manila Megastack back in January. The guarantee for this event was set at a very optimistic PHP$2 million, twice the guarantee for the inaugural Manila Megastack. Despite the increased turnout, buy ins amounted to PHP$1,940,000 meaning there was a small overlay, but the event is expected to grow further, which it surely will. Players began with 30,000 chips (300 big blinds) with 30 minute blinds, ensuring that there was plenty of room for good play, with multi street bluffs and few all ins. Variance always looked unlikely to end anyone's day within the first few levels.

Some of the notable names who made the trip to Manila for this event included, reigning Asian Player of the Year, Pete Chen. Also in attendance were Pokerstars team pro Bryan Huang, and runner up to Pete Chen in last year's APOY race, Ka Cheong Wong. These players actually ended up seated at the same table as each other, which would have undoubtedly been great to watch, given the quality of players on offer. The final table for Manila Megastack 2 included some interesting names, with Martin Corpuz finshing 8th place. Martin has almost USD$1 million in live cashes and multiple WSOP final tables to his name, and picked up a further PHP$97,000 for his efforts in this event. 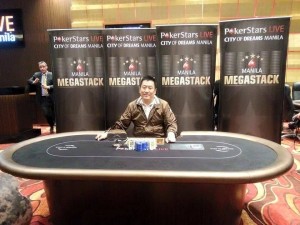 In truth, there was one man who stole the show at the final table, more than anyone else, and that man is Mike Kim, orginally from South Korea. Mike Kim now resides in Manila, but will be happy that he decided to play this event, having gone on to take 1st place and just over PHP$439,000. Having began his poker career in the US, Mike Kim has enjoyed an admirable poker journey, from small beginnings to Manila, where he works as chief poker promoter for the Solaire Poker Room. Since his arrival, this poker room has grown in reputation and attracts big name players for high stakes poker games on a consistent basis. Players such as Dan Cates and Tom Dwan have been spotted in the poker room there quite recently, and Mike Kim has become a very well known and well liked individual at Solaire Poker Room. This Manila Megastack win underlines the fact that he is much more than just a promoter and poker enthusiast, as he adds the money for this victory to his near USD$400,000 figure for previous live cashes.