After a week of nonstop International Poker Open 3 action, the US$250,000 Guaranteed Main Event finally awarded its victor and it was none other than Filipino poker pro Lester Edoc.

The final table began with Filipino player Edilberto Gopez and Lester Edoc as the chip leaders, both of them coming in with well over a million chips. After two levels, their stacks had decreased, especially Gopez's, that when Russian player Andrei Dementev doubled up with his pocket queens against Sun Ci's (China) pocket tens, he took over the chip lead status. Shortly after, Ci was eliminated in 8th place.

With seven players remaining, Filipino players Marc Rivera and Martin Gonzales were making their moves on the big stacks. Rivera's stack experienced numerous fluctuations and at one point it fell to as low as three big blinds. However, good fortune was on his side and he was able to recover after landing two big double ups, one of which was an ace-seven connecting for a higher pair on the board against Edoc's pocket queens. With his stack back in fighting contention, Rivera eventually eliminated Gopez in 7th place with his pocket jacks standing strong against Gopez's two overcards. 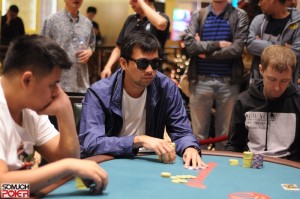 At six-handed, Dementev saw his stack dwindle until the rest were shipped over to Edoc's side of the table. Dementev exited in 6th place leaving the felt for an all Filipino battle.

The next casualty was Mark Dela Cruz who fell in 5th place. Cruz had several good hands throughout the day but his all in shove with ace-queen suited was not enough to beat Rivera's ace-nine as it connected with a straight on the board. With a nice big pot added to his stack, Rivera zoomed to the chip lead position and claimed over half the chips at the table. By this time, there seemed to be a change in the weather. Edoc switched from hanging tight to initiating most of the action. He won several pots without a showdown and then eliminated Isabelo Braza in 4th place. Although he was still second-in-chips to Rivera, Gonzales lent some assistance when he took a hefty chunk from Rivera with a double up with his ace-queen. Edoc then finished off Rivera in 3rd place and faced Gonzales at heads up with a 2:1 chip lead. 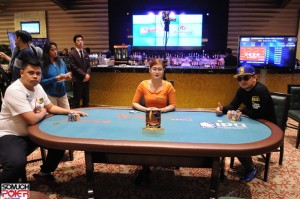 Congratulations to Lester Edoc for reigning victorious at the IPO3 Main Event! Edoc overcame a field of 258 entries to capture the championship title, the first place cash prize of US$59,400, and his first-ever Main Event trophy. 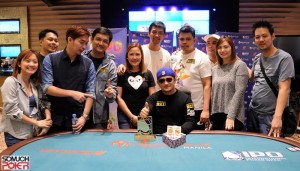 Final Table Payouts: (in US$)