Paul Phua has been one of the most interesting figure in the Asian poker world for some time now. People started to talk about him after his participation in the 2012 $1 million buy in event at the WSOP. He won the same year a £100K high roller event in London for £1 million, before finishing 3rd in the WSOP – APAC high roller $50K rebuy event in Melbourne for AUD$325K. The HK$1 million buy in event at the Manila Millions in 2013 saw him pick up HK$3.1 million for 4th, and just last year at the EPT Monte Carlo super high roller, he finished 6th for 385K Euros.

Phua is not just a “Chinese businessman” who makes up the numbers in these events. In terms of cash games, Phua has been a central participant in the biggest games in Macau, reportedly bankrolling, or buying a piece of a players action to enable them to play the very biggest games in town. He is also known for having the connections to fill seats at those stakes, ensuring that when a player turns up to play, there will always be a game running.

It is not only in Macau that he plays cash games, as those who follow televised cash games will probably know. In the 2014 Aussie Millions cash game, with blinds at AUD $1K/$2K, Phua and Lo Shing Fung played a near $1 million pot when Phua flopped top set and got coolered by a turned straight.

Outside of the poker world, Phua has been hard working businessman for most of his life. One of his enterprises ‘Sat Leng Sociedade Unipessoal’ reportedly set up a junket operation for ‘Las Vegas Sands Corporation’ back in 2005 when they entered the market in Macau. Always the man with the connections, Phua brought in tens of billions of Hong Kong dollars in the form of big money gamblers, who were gladly welcomed by the new casino. Within a year, Phua was generating more than a third of all their high stakes action by bringing VIP players in through the door, before eventually selling his stake in the company.

Read more about the Junket Industry on Somuchpoker

The head of one of the biggest sports betting ring

It hasn’t been an easy journey all the way for Paul Phua however, as he was at the centre of a sports betting bust by officials in Macau last summer. They claimed that Phua was handling bets running into dizzying figures, $HK 5 billion, to be exact just for the first week of World Cup. Despite these betting activities being deemed illegal, he was granted bail, and also the freedom to travel across the world while awaiting trial.

Word quickly circulated that Phua had used his financial strength and influence to secure favourable bail terms, and fly to Las Vegas in order to continue his business. When it’s about sport betting you cannot miss a World Cup! Few days after, he and his son Darren Phua were arrested again in a villa by the FBI, while placing bets during a football world cup match. His son Darren readily admitted that his father owned the IBCBet website that had been used to place many large bets. The company, based in Manila is according to sources from the South China Morning Post probably one of the biggest sports gambling operation in the world. 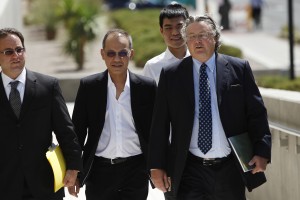 In a further twist to the FBI investigation, allegations of gang links were levelled at Phua, as his laptops were found to contain contact details of people the FBI believed to be high ranking members of the ‘14K Triads.’ This group are known to have links to the gambling world expecially in the junket industry. Considering that vast number of influential contacts in Asia that Phua knew from his former business bringing in VIPs, this could just be coincidental of course. Paul Phua has always maintained that he has nothing to do with gangs whatsoever.

The bail conditions in Las Vegas turned out to be a little more harsh than they had been in Macau, with Paul, and Darren Phua, requiring a combined $2.5 million to post bail. Being friends with many people in the poker world eventually helped the two men out of their predicament though, as Phil Ivey, and Andrew Robl generously stepped forward to pay their bail. Paul Phua also had a USD$48 million jet on standby, which was seized as collateral. Despite all the conditions being met, the authorities dragged their feet, and kept the men in custody as long as they were legally able.

In December last year, a judge examined the claims by Phua’s defence lawyer that evidence had been gathered in an illegal way, with the FBI potentially having misled a magistrate in obtaining a search warrant. Proceedings were then delayed until early February, at which point the evidence gathered by the bureau was deemed to have been collected in a way which means it cannot be used in trial. The FBI may yet appeal this ruling, and if they do, a trial could take place as early as April. The final twist in this story should arrive within a few months, but it is fair to say that the evidence ruling currently in place, allows the Phua family to breathe easier for now.

The case looks likely to fall apart as it is heavily reliant on that evidence, but the FBI still have a week left to dispute the judges decision. Whatever the eventual outcome, it is fair to say that Paul Phua has had a difficult time of it recently, but he is unlikely to have been put off from playing poker or betting. He has in the past experimented with online poker under the screen name ‘MalACEsia’ but has always looked more comfortable in the live cash game arena, where he should soon be making a return. After all, the poker world, and high stakes tables, just wouldn’t be the same without him.