There’s a fine line between insanity and genius, between greatness and failure. Archie “The Greek” Karas constantly teetered on that line. He arrived in the USA as a teenager and decided when he was 18 that he would dedicate his life to gambling and never work again.

It wasn’t easy; Archie was usually either a millionaire or dead broke. But listening to him, only one thing really mattered: “I’ve gambled more money than anyone in the history of the planet…Unless the casinos decide to raise their limits after I’m gone, I don’t think anyone will ever gamble more than I have. I’m the biggest ever.”

The story of his run is still one of the biggest in gambling history. He turned fifty dollars into forty million from pool, poker, baccarat, and dice.

From there, he hit the pool tables, betting $10,000 per game and winning nearly two million dollars from one man. His opponent switched things up by challenging Karas to heads-up poker. After a week, Archie had taken another million from him.

Bloated with confidence, Karas began taking on world-class poker players such as David “Chip” Reese and Stu Ungar in heads-up action. They played extravagant stakes, reaching $8,000/$16,000 at one point according to Karas. Big stakes equal big variance and in just two weeks, Archie won over $2 million of Reese’s money, and in a matter of hours, relieved Ungar of $900,000. Over the next month, fifteen of the world’s best poker players failed against him, and his bankroll swelled to $7 million. No one dared to challenge “The Greek”.

He moved his attention to dice to feed his need to win. The Horseshoe Casino closed down a table just for him, and protected it with armed security guards. Progressively, he got them to increase their maximum betting limits 15 times higher from $20,000 to $300,000 per bet. He began winning hundreds of thousands, even millions of dollars in one sitting. The rush was incredible. It didn’t come from the money for Karas, it was the winning, and it was winning BIG that kept him coming back time after time. By 1995, Archie had amassed a $40 million stack. 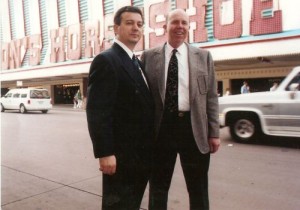 Archie Karas with Jack Binion president of the Horseshoe

And then he lost it. All of it. Gone. No savings, no investments, all his money was in various safes of different Las Vegas casinos. It only took about three weeks of Baccarat, craps and poker to diminish $40 million. Bankroll management was a hollow term for him. There was no “stepping down in stakes” when his wallet took a hit. Just bigger, bigger, bigger, more, more, more.

Some say he was a fool, a degenerate gambler who could have put aside a tiny fraction of his winnings and been set for life, but chose to “let it ride” till he busted.  One thing is true, however: Archie “The Greek” Karas would never have won that much money if he had been timid.

“I’ve been a millionaire over fifty times and dead broke more than I can count. Probably a thousand times in my life,” Archie recalls. “But I sleep the same whether I have ten or ten million dollars in my pocket.”

Money meant nothing to him. The gamble meant everything. He walked that fine line between insanity and genius every time he played, and it must have been one hell of a ride.