In recent times, Guo Meimei has gained something of a reputation as an internet celebrity in China. She has accumulated over 2 million followers on social media, despite her only accomplishments appearing to be the ability to live a glamorous lifestyle by suspicious means. In 2011, she first hit the headlines when she began posting pictures of herself with expensive handbags and luxurious sports cars, saying that she worked as General Manager of the Red Cross Society of China, a state backed charity. This led to widespread mistrust of the organisation and how donated funds were being spent, leading to boycotts and a substantial drop in donations. According to Meimei, she didn't gain all her wealth in this immoral way, she had other immoral ways too. 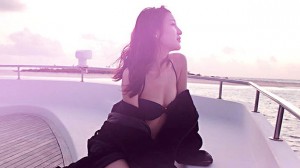 Her other hobbies include gambling, and poker in particular, although reports do not say whether she made any of her money at the game.  Going by the information released so far, it seems that Meimei invited about half a dozen friends over for high stakes poker on a regular basis in in her home in eastern Beijing. Meimei's interest in poker began after she started dating an overseas poker player, whose identity is currently a mystery. They apparently met in Macau, and hosted home games in the months that followed. A professional dealer was hired, and Ms Guo took a 3 to 5 percent rake on the game.

During the 2014 World Cup, she started to organise some betting and promoted online betting sites via her popular social media accounts.

Few month after she was arrested by police with seven others ahead of the football World Cup final in 2014, amid a crackdown on the massive illegal online betting on the tournament in China. In a 'confession' on Chinese state television, she admits she amassed her wealth through gambling but also through prostitution. With no make–up and dressed in an orange detention centre uniform Ms Guo described in details her activities including one arrangement she had with a man in Guangdong:

"He transferred 50,000 yuan to my card. And he gave me another 300,000 Hong Kong dollars to me. We had sexual relations on the day of my arrival,” she said. “The next day I said I would go back to Beijing. He then bought me the air ticket and transferred another 110,000 yuan to my account after I returned.” 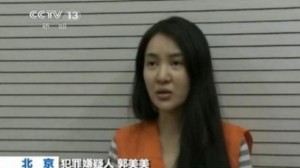 This week, her most recent illegal betting activities landed her in court, where she stood trial and denied running an illegal casino. Her pleas for leniency in court after her latest arrest appear to have fallen on unwilling ears however, as she has been sentenced to 5 years in prison.

Through her rise to online fame, Meimei became ever more notorious, often boasting to her followers about her lavish lifestyle. This has ultimately led to her downfall, as her conviction and jail term will remove her from the public eye for some time. Many of the Chinese people feel that she has got exactly what she deserves, but she has no doubt gained a few thousand more followers after her latest appearance on the news, and that has always seemed the primary goal for anything Meimei does.