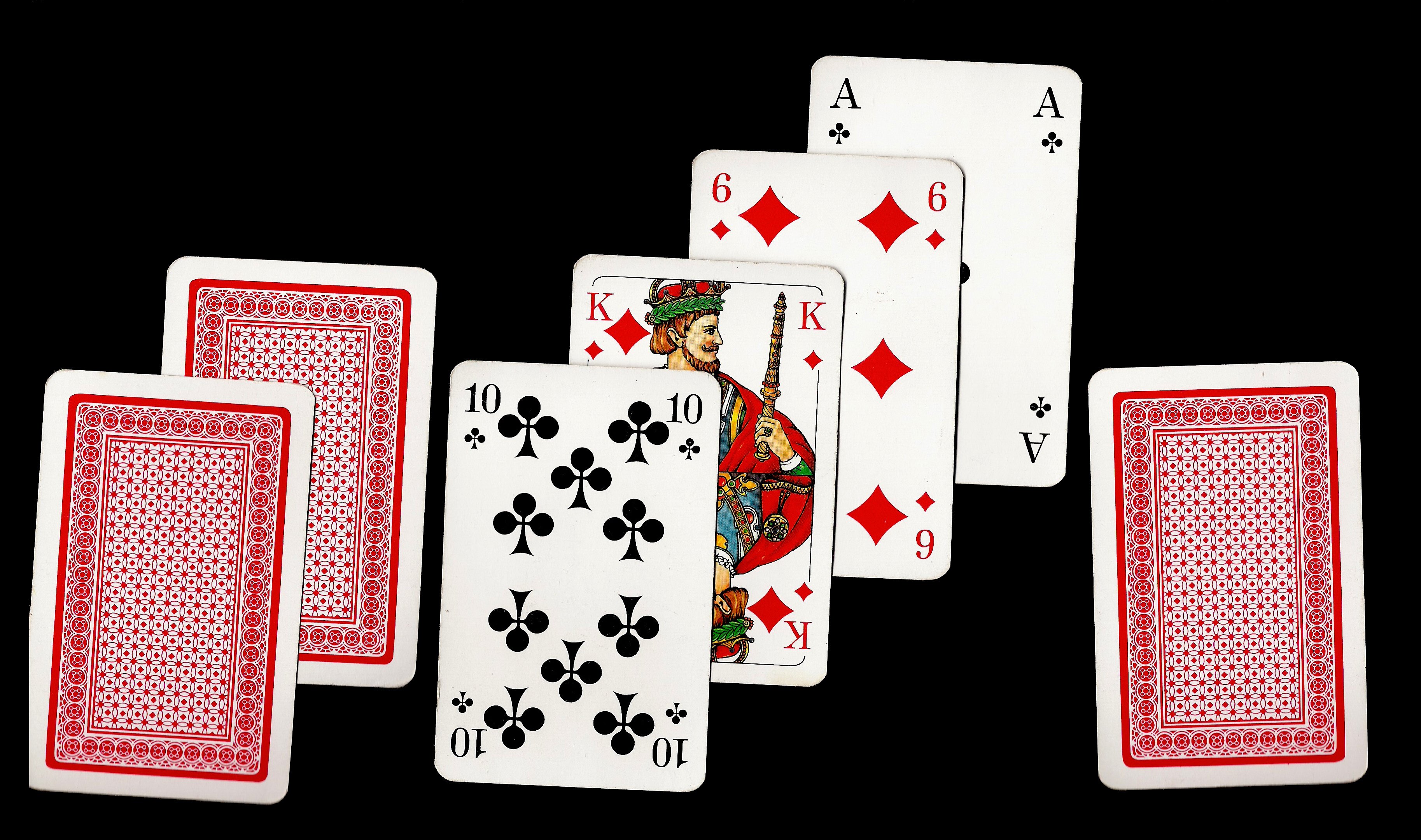 Stud games were the most commonly played form of poker before the Texas Hold’em era. These days, it’s still around, although far behind Hold’em and Omaha in popularity. You can play it on PokerStars and you’ll find multiple Stud events at the WSOP each year.

Stud games are a whole separate family of poker games in which a player’s hand is dealt part face up and part face down. These games include 5-Card Stud, 7-Card Stud (the most commonly played one); and the Hi-Lo versions of both. Razz is also part of this family – however, it’s different enough to merit its own article later on.

Most often, Stud poker is played with fixed betting limits. But evidently, the Pot Limit and No Limit variations are also out there, you’ll just have trouble finding a game.

Be aware: some casinos dub a table game in which you play against the house as “Stud Poker” as well. In those games, the rules are set up in such a way that you can’t stay profitable in the long run. If that’s your goal, don’t play at those tables. Also, make sure which version of Stud poker you’re about to play before you buy in anywhere.

Each player at the table is dealt 3 cards, one face up and two face down. There are no blinds in Stud games; instead, there is a so-called “bring-in”. At the start of each hand, whoever has the lowest upcard (sometimes referred to as “the door card”) has two options: either they post the bring-in, a fraction of the limit; or they can choose to bet to the limit.

If more than one player has the same ranked card, suits come into play. Bhe suit ranking is in alphabetical order, from lowest to highest: clubs, diamonds, hearts and spades. Please note that suit ranking only counts when determining the bring-in. If two players have, for example, an Ace-high flush at showdown, one of diamonds and the other of spades, they simply split the pot.

Once the bring-in is posted, a betting round follows. Players have the option to fold their hand, call the bring-in or raise. If someone raises, the other players need to match the raised amount in order to stay in the hand. If at least two players are still in the hand, another card is dealt to everyone face up. If there is no caller, the last aggressor claims the pot.

After the fourth card is dealt, players can bet their hand again; this time, starting with the player with the highest open board. That means if somebody has an Ace and a King open, they have to act before the player with Queen and Jack up. If a player has an open pair, they speak before the Ace-high board and they also get to bet double the limit. Otherwise the limit doubles after 5th street.

The next two cards the players get are also face up, with a betting round following each, each time starting at the player with the best hand showing. These are referred to as the 5th and 6th street.

The last card, however, is dealt face down. This, the 7th street is the last betting round. At that point, the players have 7 cards dealt to them – with 4 cards showing and 3 in the hole. After that, a showdown follows where the classic Texas Hold’em ranking applies. Whoever makes the best 5-card hand out of their seven cards wins.

Much is similar in 5-Card Stud to what is written above about 7-Card Stud. The difference is, you get two cards before the first betting round, one face up and one face down. The bring-in rule applies here as well.

Then two more open cards are dealt to the players with options to raise afterward. The best open hand starts the action. On the last street, the 5th card is dealt face down, and another betting round comes before the showdown.

The main difference is at showdown in this variation of Stud. If there is a qualifying low hand, meaning 5 unpaired cards that are 8 lower, the low hand takes half the pot. Straights and flushes are discounted. An Ace can be counted as a high or a low.

Please note that even though low cards are more valuable, the lowest card by suit is still the bring-in on 3rd street.

In Stud games, you get the information about your opponents’ hands from their open cards and their betting tendencies. You need to estimate how much equity you have against, let’s say, a player’s check-calling range on 6th street with AJ76 showing.

With that in mind, it is wiser to bluff with unpaired open high cards since your hand is likely to be perceived to be stronger by the others at your table.

You also need to keep in mind all the upcards that have been folded. This is especially useful if you’re on a draw. If you know that some of the cards that you need to complete your draw are already dead, you can deduce you have that much less equity.

Position as a concept does not apply the way it does in No-Limit Hold’em. Who gets to act last can change from street to street within the same hand, so playing different ranges from different positions is not necessary in these games.

5-Card Stud is one of the oldest forms of poker. It was even played over 150 years ago during the American Civil War.

The famous “Dead Man’s Hand” also comes from a Stud game. According to the urban legend, American frontier hero “Wild Bill” Hickok was playing a game of 7-Card Stud when he was shot in the back of the head on August 2nd, 1876. There are multiple sources contradicting each other about what hand he was holding – the most commonly accepted one is AsAc8s8c face up with one card in the hole. That would mean Hickok was killed on the 5th street.

7-Card Stud gets a mention in Tennessee Williams’ famous 1947 play A Streetcar Named Desire. In fact, the main character, Stanley Kowalski – played by Marlon Brando in the original cast – closes the whole play with the line “The game is Seven-Card Stud”.

Action in the online high stakes Stud cash games is scarce these days. A few years ago, when some games were still played at PokerStars’ high level cash tables, they were mainly dominated by unknown Chinese players. The last well-known online Stud reg was Christopher “Ceegee87” George.

Famous Israeli poker player Eli Elezra is a 4-time WSOP bracelet winner. 3 out of his 4 bracelets are from Stud events.

Stud poker is also part of many popular online mixed games. Limit 7-Card Stud and Limit 7-Card Stud Hi-Lo are featured in the 8-Game. In the name of the mixed game H.O.R.S.E., the “S” stands for Seven-Card Stud. This means that all the “usual suspects”, big name pros who are admittedly fond of mixed games also play quite a bit of Stud as well. These players include Shaun Deeb, Michael Mizrachi, Brian Rast and Viktor “Isildur1” Blom.