The ACOP Main Event is possibly the strongest field, and certainly one of the biggest prize pools, that you will see in an Asian poker event. Day 1a and 1b have now been completed for the 2015 instalment of the ACOP Main Event, and one of the key questions will be whether the field has seen growth compared to last year. The truth is, we cannot say for certain, because late registry stays open for the first 90 minutes of day 2.

255 entries so far in the event

We can certainly take a look at the numbers so far, however. Day 1a saw 110 players buy in for HK$100,000 (USD$13,000) with only 63 making it out of the day alive. Day 1b attracted 145 hopefuls, with 94 making it through the day. With 291 runners last year, the 255 who have entered the field this year, would represent a marked drop in numbers. With another 90 minutes of late registry still to come tomorrow though, the 255 figure is set to rise further.

The field size is always a point of interest in an event of this magnitude, it's player composition, even more so. What we saw today was an extensive list of poker talent, drawn from many corners of the globe. Tournaments with a 1st prize that looks set to fall around the USD$700,000 mark, have a way of attracting the world's best. Some of the big names to have fallen on day 1a include: Last year's champion, Gabriel Le Jossec, along with Naoya Kihara, Chen An Lin, and Fedor Holz. Day 1b saw the following big names taken out of contention: Kitty Kuo, Celina Lin, Randy Lew, Manny Stavropoulos, Dominik Nitsche, and football star, Ronaldo. 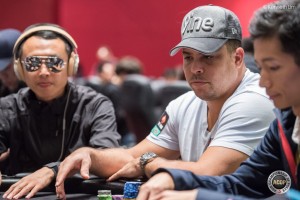 Below is a compiled list of notable name survivors from each day, and their chip counts.

While some big names were cut down by the day 1 minefield, a long list of notable pros are safely through to day 2. In order to add some context to the chip counts listed above, the following is a list of our top 10 chip stacks for when the remaining field of 157 merges, and day 2 begins.