The third day of this gripping ACOP Main Event began with 65 players pulling up a chair and readying themselves for the trials ahead. Day 3 has now come to a close, and we are left with a mere 23 players, all of them in the money. The herd has been thinned, recreational and pro alike, but there are still interesting stories woven into the fabric of the field that remains.

We have seen a number of notable pros survive today, along with some who have fallen by the wayside. Andrew Gaw is no longer in contention, and the same can be said for Isaac Haxton, and former big stacks Zhengye Yao and Yasuhiro Ojiri. Erik Seidel has also now busted, along with Adrian Brion, and Bryan Huang.

In terms of survivors, we still have the ACOP High Roller champion from last year, Steve O'Dwyer. Sticking with High Roller specialists, Christoph Vogelsang remains very much in contention too. Connor Drinan is no stranger to big buy in events either, having busted out of the 2014 WSOP Big One for One Drop event, with pocket aces against pocket aces. He is our chip leader going into day 4. In other notable news, Raymond Wu (163,000) remains in the field at the end of the day, as does Mikhail Shalamov (100,000). 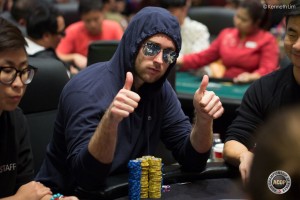 KC Wong , Yuguang Li and the battle for the APOY title

It should also be mentioned that with this event, and those remaining in the ACOP festival, we will see the final accumulation of points which will decide the Asian Player of the Year title. To add some spice to that fact, KC Wong is still alive in this event with 169,000 chips, and although Yuguang Li has been on the ropes a little compared to yesterday, he still has the ammunition to fight for the title tomorrow, with 249,000. KC Wong occupied 2nd place in the APOY race before this event, close on the heels of the leader, Alan King Lun Lau. Yuguang Li is a little further adrift in 4th, but still in the race with a serious chance to win if he makes it to the final table.

Read more about the APOY Title

The end of day chip counts are as follows: