During the recently concluded WPT National Philippines festival, one of the most respected Korean players in the Asian circuit, Sim Jae Kyung aka Simba, took time to share with Somuchpoker his thrilling poker journey. Simba is currently the top ranked Korean player according to the GPI index and has achieved up to 183 in the GPI ranking world wide.

Simba’s Love for Poker and His Beginnings

Back in 2009, Korean native, Simba decided to take a vacation from his teaching job to backpack around the world. He visited places such as India, America, Europe, and eventually found himself in the Philippines where he happened to chance upon a poker room. Curious to the game, he walked in, and from there, his life took on a completely different turn. Simba fell in love with poker. This is his story.

With only $3,000 to tide him over, Simba was determined to pursue his newfound joy in life, poker. If he went broke, then it was back to Korea. He lived in a very cheap bug-infested place in the Philippines with a lot of tenants and noisy chickens. He dropped many vices such as drinking, going out, and smoking in order to conserve his money for poker. 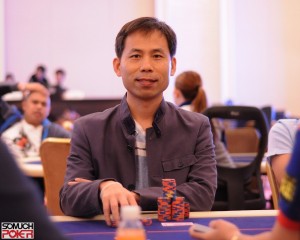 Grinding low stakes cash games and playing small buy-in tournaments for a living, Simba caught his first big break at the APPT Manila 2010. Simba won a Main Event seat worth $2,7000 through a $110 satellite. Although this makes many happy, for Simba, he was placed in a big dilemma. He had a buyer for the seat, which meant instant cash in his pocket, or he could play the Main Event, go up against many experienced pros and players, and possibly not cash. For two days, he was conflicted, as the saying goes, he tanked, but eventually he took the seat for himself. This proved to be a great decision. He went deep and placed 10th, winning $13,000.

Following that win, Simba resumed his normal routine of grinding, this time playing more tournaments to gain experience for upcoming events. In 2012, Simba won a seat to the APPT Cebu Main Event and this time, he was determined to play it despite the outcome. He made it into the final table and finished in 8th place, collecting $15,444. The following year would send his joy to the roof when he returned to APPT Cebu, won a seat through a satellite again, and then won the Main Event, earning himself $95,487.

Not long after winning his first major international event, Simba decided it was time to try out other events in the world. With a bankroll of $10,000 he went to Melbourne, Australia for the 2014 Aussie Millions Poker Championship. As previous, he won a seat to the Main Event and played it, finishing in 34th place and cashing out $26,245.

Two months later, he went to Italy for the IPT in San Remo where he captured his biggest live career win, $103,256 for placing 3rd in the Main Event. Another couple of months after, he went to the United States to participate in the WSOP. He placed in four Deep Stack events with his biggest win at the Venetian, a total of $29,077 for a 4th place finish. It is safe to say that his days of cheap living and cackling chickens are a thing of the past. 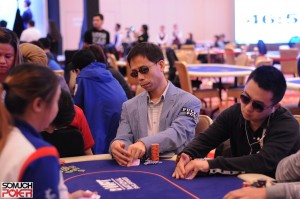 Returning to Asia to focus on playing the region, Simba began to notice the growing number of Korean poker players participating in the Asian poker circuit. Although they all traveled individually or with friends, there wasn’t a group forum that banded them together. Seeing how well a team concept worked for the Japanese, he decided to form Team Korea in December with 15-20 members already in the group. They’ve signed a deal with APT and Fulpot. The group will have its own satellites to events, meet and discuss upcoming festivals and tournaments, and they will be offering promotions for their team members.

As head of the team, Simba is looking forward to traveling together with the team, cheering for each other, and having fun at every stop.