He holds a record 16 WSOP gold bracelets and has $26.6 million in live tournament winnings.

Hellmuth’s height never goes unnoticed, at 6’7” (2.01 meters). As he towers above many of his competitors, commentators can’t refrain from mentioning how tall Phil is. He is also known for regularly misbehaving after bad beats at the tables. He’s also been quoted as saying, “If luck weren’t involved, I guess I’d win every one,” as well as “I’ve revolutionized the way to play Texas Hold’em.”

Growing up in Madison, Wisconsin, as the eldest of 5 children in a Catholic familiy, Hellmuth led a relatively wholesome childhood. His father, Phil Hellmuth, Sr., was a dean at the University of Wisconsin, and his mother, Lynn Hellmuth, was a sculptor. Hellmuth was introduced to poker while attending college at the University of Wisconsin – Madison. After playing that first game in a friend’s dorm room, he immediately fell in love and started playing as much as he could with friends and family, but soon he wasn’t satisfied with the level of competition.

Moving on to stronger competitors, Hellmuth started playing high stakes local games with professors, doctors, and businessmen. He built up what he felt was a substantial enough bankroll, quit college, and headed to Vegas to become a full-time poker player. However, he quickly learned that playing in Vegas was quite different than Madison, WI. After a disastrous first trip, he returned to Madison build back his bankroll. Indeed, Hellmuth traveled back and forth between Vegas and Madison 10 times before getting his first win at the tables. Each time, after losing in Vegas, he would return to Madison and work as a field laborer, detasseling corn and tilling soil for Blaine Farms, to rebuild his bankroll. Finally, finding success in the low stakes cash games in Vegas, Hellmuth started playing for higher stakes and entering poker tournaments.

Hellmuth has cashed for $26.586 million in live tournaments during his long career, according to his Hendon page. He amassed that sum by cashing in 383 different events over the course of 35 years. He’s currently in the top 20 on the famous Hendon All Time Money List.

Hellmuth rose to prominence after his 1989 WSOP Main Event win. However, his massive tournament cashes haven’t started coming in until the 2000’s. There’s multiple reasons for that. First off, the massive high rollers of today weren’t around in the 1980’s and 90’s -and the ones that were held are nominally smaller because of inflation.

That being said, Hellmuth does have some major live cashes under his belt.

In 2005, he won the first ever NBC National Heads-up Championship for $500,000. He beat fellow WSOP Main Event champion Chris Ferguson in the last match-up for the title.

In 2021, he took on Daniel Negreanu in an even more anticipated heads-up challenge. He won the first two Sit&Go’s of the match-up, which had a $50,000 and a $100,000 buy-in, despite being down to a 19:1 chip deficit in the first one. The third and final match in the Duel had a $200K buy-in, and it was also victorious for the Poker Brat, thus completing his 3/3 sweep against “Kid Poker” Negreanu.

He then beat recreational player Nick Wright in another $50K Heads-Up Duel S&G. For the next $100K one, a tougher opponent took Wright’s place – online poker legend Tom “durrrr” Dwan. Dwan won the $100K Duel in September 2021, but Hellmuth came back strong and triumphed the $200K re-match in January 2022.

Hellmuth’s biggest live tournament cash outside the WSOP is from May 2016. He finished 4th in the $300K Super High Roller Bowl at the Aria for $1.6 million.

Hellmuth has won a record 16 WSOP gold bracelets. He’s far ahead of Phil Ivey, Johnny Chan and Doyle Brunson in second place who all have 10 bracelets.

He has 176 cashes in World Series events, which puts him in the #7 spot on the respective list (which is topped by Roland Israelashvili with 291 cashes). Hellmuth also has the most final table finishes. Overall, he’s cashed for a total of $16.250 million in WSOP events.

His first bracelet was also his most memorable one, according to the man himself. In 1989, he won the WSOP Main Event for $755,000, defeating Johnny Chan heads-up for the title, who claimed the previous two Main event titles in 1987 and ’88. Hellmuth became the youngest Main Event champion at the time at 24.

In 2012, he finished 4th in the $1 million buy-in Big One for One Drop high roller event for $2.645 million. That is the biggest single live tournament score of his career to date.

Phil Hellmuth has appeared on a number of TV shows and live streams where he played live cash game sessions publicly. These shows include Poker After Dark, both on NBC and on the revived version by Poker Central; High Stakes Poker on The Game Show Network, Poker Night in America on CBS Sports, PokerStars Big Game on FOX; and Live at the Bike.

Out of those, the biggest games were on High Stakes Poker – there, he played $300/$600 No Limit Hold’em cash against the biggest names in poker, such as Daniel Negreanu or Phil Ivey.

Milwaukee Best Light produced a limited-edition can in 2008 that featured a picture of Hellmuth and his famous quote, “I can dodge bullets, baby.” 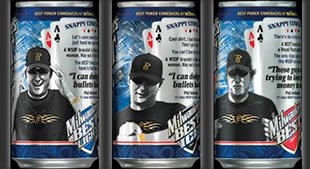 He was also featured in a commercial for 3betclothing, a clothing brand.

Hellmuth once took to Reddit to respond to the cheating scandal that took place from 2005 to 2007 on Ultimate Bet, encouraged by Kevin Kevmath Matthers, the PocketFives Community Manager,

On Reddit, Hellmuth opened up about the cheating scandal at Ultimate Bet. Hellmuth said, “I was proud to have had a big role in forcing an investigation at UB, which led to $25 million being returned to the players. People said I should have left the site, and that would have been easy to do as I was wanted by Full Tilt. But I saw another pro get haunted for years because the site he repped did not pay the players back. Staying was the right move, and I was happy when the players were paid back.“

In 2007, Hellmuth arrived at the WSOP Main Event two hours late after losing control of a race car that his sponsor had arranged for him to drive and crashing into a light fixture in the parking lot of the Rio All Suite Hotel and Casino. He was then picked up by a limo and delivered to the tournament.

In 2008, Hellmuth received a one-round penalty at the WSOP Main Event for verbally abusing another player.

Famous for his loud mouth and aggressive attitude, Hellmuth’s blowups at the table have been recorded many times. YouTube contains a virtual cornucopia of great Hellmuth freakout moments.

One of the most famous ones took place in a match against Tom Dwan at the NBC National Heads-up Championship, in which Dwan sucked out on him with pocket 10’s against Hellmuth’s Aces.

Hellmuth met Katherine Sanborn when they were both students at the University of Wisconsin in Madison. The couple married in 1990, and three years later, when Katherine graduated from the University of Wisconsin Medical School, they moved to a house in Palo Alto, California. They continue to live in their residence today with their two sons, Phillip III and Nicholas.

Kathy Hellmuth also played in the 2005 Women’s Only World Series of Poker.

Although Hellmuth claims that he likes to visit clubs where he gets VIP treatment and is surrounded by beautiful women, the couple appears to have a good, solid relationship. As Hellmuth has reported to Bluff magazine and many other publications, “I’ve never cheated on my wife. I’m very proud of that.”

One of Hellmuth’s most famous TV moments is when he folded AK suited against Passantin’s AA in the 2005 WSOP Main Event broadcast by ESPN and said to his wife, “I can dodge bullets, baby.”

Seemingly a natural entrepreneur, Hellmuth owns and runs a publishing company, a clothing company (PokerBrat.com), a real estate company, and a casino games company. In addition, he regularly makes public appearances as a paid inspirational speaker. As an active writer, he’s written an internationally syndicated newspaper column, “Hand of the Week,” for the past 15 years. The column details the many great poker hands Hellmuth has played or witnessed during his years playing professional poker. Moreover, his book, Play Poker Like the Pro’s, was New York Times bestseller, and he published his autobiography, Poker Brat, with a foreword by Daniel Negreanu in 2017.

He’s also had several digital technology ventures. He was involved in the creation of the UltimateBet software and is a former member of Team UB. And, in 2004, he partnered with Oasys Mobile to develop Texas Hold’em by Phil Hellmuth, a mobile app with over 1.35 million downloads globally.

Celebritynetworth.com estimates Phil Hellmuth’s assets to be worth around $20 million.

A dedicated philanthropist, Hellmuth has served as the chair or emcee for many poker charity events, raising over $20.4 million over the course of his activities. His charity work includes hosting and emceeing fundraising galas for the Clinton Global Initiative, the Children’s Hospital of Philadelphia, Eva Longoria’s “Eva’s Heroe,” the Starkey Hearing Foundation, Ante Up For Africa, and Shimon Peres’ Peace Thru Sports Foundation. He also visited US troops on a USO Tour of the Middle East in 2010. He and Kathy also actively support Heifer International, an organization that benefits the developing world by providing livestock, poultry, and grain.

Hellmuth is an active sports fan. He particularly loves boxing, baseball, and basketball and is a huge fan of the Golden State Warriors.

Great picture of @KateUpton at #TigerJam receiving No Limit Hold’em lesson from me. @twfoundation is a great charity! @TigerWoods