Following an action packed opening night, the next two days at the GG Spring Festival 2021 hosted at online platform Natural8 were just as loaded with 27 events served and three others on its final day.

The biggest winners were Canada’s Guillaume Nolet and USA’s Lev “LevMeAlone” Gottlieb. Nolet seized over one million dollars at the Sunday Five Million and Gottlieb became the first player to win two events – Super MILLION$ and Super Tuesday high tier – to collect over US$ 900K. Other players going the distance were Estonia’s Ottomar Ladva and France’s Ivan “Cordialement” Deyra. For Asia, India pulled through once again with Pulkit Goyal winning the Turbo [6 Max] high tier. Juan Pardo Dominguez continued to run strong reaching four final tables. To meet the high demand of the L-13: $5.25 Bounty tournament, the previous 5,000 player maximum was increased to 6,000. It eventually amassed 5,768 entries making it the largest event to date.

For those just hearing of the series, GGSF 2021 is a celebration unlike any other offered this season. It boasts the biggest guarantee of US$ 150 million with 336 tournaments spread across three tiers – Low, Medium, High. The festival runs from April 4 to April 25. Buy-ins range from a low US$ 5 to a pricey US$ 25,500 with event guarantees from US$ 5,000 to a massive US$ 10,000,000. After three days, the festival has already paid out over US$ 30 million with 50 events completed. More games and money to be won. For newcomers, make sure to sign up on Natural8 to avail of exclusive promos and freebies. You can read up on those perks at the bottom of the page.

And now have a read on our top stories for GGSF Day 2 and Day 3.

Guillaume Nolet wins over US$1M at the Sunday Five Million

On Day 2 of the festival, one of the richest and most expensive tournaments came to a close with Canada’s Guillaume Nolet dusting the competition to collect his first ever seven figure payout. Nolet entered the final table of the Sunday Five Million ranked second in chips, proceeded to eliminate the last five players to capture the enormous US$ 1,084,891.90 first prize, which to date was the largest payout of the festival. For added sweetener, Nolet didn’t need to fork out the entire US$ 25,500 buy-in as he won his seat via a US$1K Mega Satellite.

Based on The Hendon Mob and GGPoker, Nolet has earned over US$ 4.8 million in combined live and selected online tournaments with his largest payouts gained at high roller events around the world. 2019 was his best year on the live felt with several six figure scores amounting to over one million dollars. In online earnings, his biggest known win was in October 2020 at one of the weekly GG Super MILLION$ locking up US$ 502,688. Including this latest victory, Nolet has accumulated over US$ 2.9 million on the GG network alone.

The two-day H-06: $25,500 Sunday Five Million attracted some of the most distinguished poker players worldwide. As mentioned on our first recap, numerous players re-entered with a couple of them firing as many as seven bullets. After six hours of late registration, 198 entered for a small overlay worth two buy-ins. Day 1 wrapped up at the final 9 with Andras Nemeth perched up top and Nolet running second.

Both players would eventually meet at heads-up but before doing so, this was how the others tumbled. Matthias Eibinger booted short stacked Juan Pardo Dominguez, Nemeth widened his lead after eliminating FlowTao and Yuri Dzivielevski, then the next four players – Elio Fox (6th), Eibinger (5th), Benjamin Rolle (4th), Francisco “VaPaCooler” Benitez (3rd) – fell at the hands of Nolet to face Nemeth at heads-up ahead 5:1. Several hands in, Nolet widened to 8:1, Nemeth doubled up with pocket Jacks over pocket sixes but it wasn’t enough to overtake. To capture the win, on a board

with bets at every stage, Nemeth checked, Nolet shoved, Nemeth tank called with

which was second best to Nolet’s

Last year, USA’s Lev “LevMeAlone” Gottlieb stormed out of obscurity when he bested some of the world’s top players including Belarus’s Mikita Badziakouski at heads-up of the WSOP 2020 Online International US$ 10,000 Short Deck No Limit Hold’em Championship. For his victory, Gottlieb pocketed US$ 276,393 and his first WSOP bracelet. Since then, his scores online have been very light until the GG Spring Festival.

Recapping the Super MILLION$, this was a two-day affair with 312 entering for a slight bump up to US$ 3,120,000. Of the 35 places paid, Gottlieb made out like a king, awarded over half a million dollars after defeating Brazil’s Pedro Garagnani at heads up. At the time, it was the second largest payout of the series.

The win didn’t come without snags though. Like many, Gottlieb busted on his first buy-in. On his second bullet, he drove his stack to the final table with a commanding advantage. Mid way action, third ranked Garagnani railed two players – Damian Salas (7th) and Juan Pardo Dominguez (5th) – to take the lead, however, Gottlieb emptied out Jordan “PiePie” Cristos (4th) to regain command. To reach heads up, Garagnani called out Matthias “ILUCKuHARD” Lipp’s river bluff to send the Austrian packing in 3rd place.

Heads up opened with Gottlieb up 8:1 that didn’t hold against the fiery Garagnani. Gottlieb reclaimed the lead on a straight over straight then surged higher reaching a 9:1 advantage from which Garagnani could not overcome. The final hand was

Running simultaneously was the H-15: $10,300 Super Tuesday event with 141 entries for another seven digit prize pool of US$ 1,410,000. Seven hours in, the final table was formed with nearly every player on multiple re-entries including Gottlieb who was on his fifth bullet, the most by any of the finalists.

Ranked third just below David Peters and chip leader Joao Vieira, Gottlieb went to work, railing 5 players – Fabrizio Gonzalez (9th), J Andersson (7th), David Peters (5th), Chris Rudolph (4th), then after a heated three way bout, he ended Timothy Adams (3rd) – to face Vieira at heads up. Gottlieb was ahead by 7 big blinds which further increased until Vieira doubled up to trim it down to 5 bbs. However, a few minutes later, both were all in again with Vieira

to improve Gottlieb to two pair to claim his second series win.

From Satellite to Champion: OTTOMAR LADVA

Another satellite winner took it all the way to the finish line. Estonia’s Ottomar Ladva won a US$ 2,625 Mega Satellite to the H-16: $25,500 Super High Roller. At heads-up, he struck a deal with Marius Gierse guaranteeing himself the higher pay of US$ 446,446.20 then went on to win the flip.

The M-05: $1,050 High Rollers Main Event was another two-day event that paid out over a million. It kicked off on opening night with 1,091 entries to slightly breach the advertised guarantee. 37 players reached Day 2. After nearly six hours of play, France’s Ivan “Cordialement” Deyra defeated China’s Song “xuesong” Xue at heads-up to claim the US$ 153,550.14 first prize.

This was another great victory and score for Deyra to add to his long list of achievements. In 2019 he championed the WSOP US$ 3,000 No Limit Hold’em event for his first ever series bracelet and a career high payout of US$ 380,090. He has accumulated nearly US$ 1.4 million in live tournament earnings and around US$ 385K in recorded online cashes. For his latest win, Deyra sold 50 percent of his action. Good fortune rained on staker Adrien Delmas who bought it all.

For a quick rundown of the final table action, at five handed, Goyal caught a very lucky river. All-in preflop with

for trips Kings. At three handed, he got lucky again off Raus with

when the cards felted

. After more exchanges with Raus getting pounded by both opponents, Goyal finished him off in 3rd place to face Harry “Vulvasore” Lodge at heads-up. It only took one hand to close it out.

After five tournaments reached their 5000 entry maximums on opening night, on the ensuing days, several events nearly reached capacity. At the L-13: $5.25 Bounty, the demand was very high that the maximum was increased to 6000. A total of 5,768 entered with Mongolia’s SeeGii outlasting the herd to rake in a combined US$ 2,426.47 in winnings and bounty rewards.

Juan Pardo Dominguez has been on fire at the festival. He reached the final table a stunning 4 times for a combined US$ 671.5K. Here’s a look at those achievements: 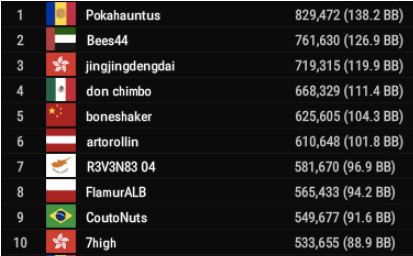 For players in Asia, Natural8 has you covered with tournaments right on the region’s prime time. Games begin at 18:05 and 20:05 (Hong Kong time) and are open to everyone.

For players signed up on Natural8, expect plenty of GGSF freebies. Throughout the series, Natural8 will be giving away GGSF tickets via their hourly freerolls, VIP Club Freerolls, GG Masters Freerolls, and First Deposit Freerolls. For N8 players that participate in any of the GGSF 2021 events, you gain entry to exclusive Natural8 GGSF Flipouts with each entry beefing up your stack. Flipouts happen every Saturday on April 10, 17, & 24, with one flipout for each of the three tiers. Prizes per Flipout: US$ 10,000 (High) / US$ 5,000 (Medium) / US$ 2,000 (Low).

Another exclusive promo is the US$ 50,000 GGSF LiveX Sponsorship. In order to land this special promo, you’ll need to overcome a mountain of players and win the GGSF Main Event-H: US$ 1,500 NLHE, US$ 10 million guaranteed event. The sponsorship includes:

Stay tuned to Somuchpoker as we continue to bring you recaps on the ongoing Natural8 – GGSF festival.