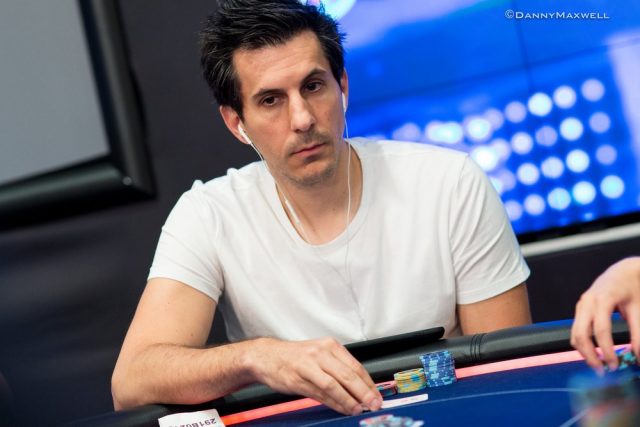 Haralabos Voulgaris is a Greek-Canadian professional sports bettor and poker player. He was born on April 7th, 1975 in Winnipeg, Canada.

He is the most successful bettor in NBA history. By the time he reached 25, he made millions on the basketball league and was staking 7-figures on any given game day. His talents were finally recognized by the league itself in 2018, when he was hired as Director of Quantitative Research and Development by the Dallas Mavericks.

As for poker, he started playing high buy-in events sporadically in the early 2000’s. He’s amassed over $3 million in live tournament earnings.

Voulgaris’ father was an avid gambler. After he finished high school, he took the young Bob to Las Vegas for a 2-month vacation. While his father was mainly at the blackjack table, Bob was at the sportsbook corner, betting on NBA games.

When they got back to Canada, where the legal gambling age is 19 as opposed to the US’s 21, Voulgaris continued to pursue his new passion. After a while, he found that sportsbooks were offering too high odds for the over in the second half in the total points scored over/under market. Traditionally, more points tend to be scored in the second half of NBA games, yet sportsbooks would offer the exact same odds for the over on half the total points scored in both halves.

Voulgaris exploited this flaw with a 70% win rate. By the late 1990’s, he was staking $1 million on NBA bets on a regular basis.

That is how he made his fortune. In the early 2000’s, he decided to try himself in another arena of professional gambling – poker. He started playing high buy-in live tournaments.

Voulgaris has cashed for $3.090 million in live tournaments, according to his Hendon page. He amassed that sum by making it into the money in only 19 different events over the span of 14 years.

Because of his success as a betting man, he could start out at high stakes tournaments as a semi-professional poker player. That is also why he needed so few cashes to build up millions in career earnings.

Accordingly, the first recorded result on his profile is from a $2,500 NLHE event at the Bellagio Five-Diamond World Poker Classic in December 2003. He finished 17th for $5,540.

His first massive score came in February 2005. He came in 2nd in the $10K Main Event at the LA Poker Classic for no less than $904,122. He lost to 4-time WSOP gold bracelet winner Michael Mizrachi heads-up for the title. 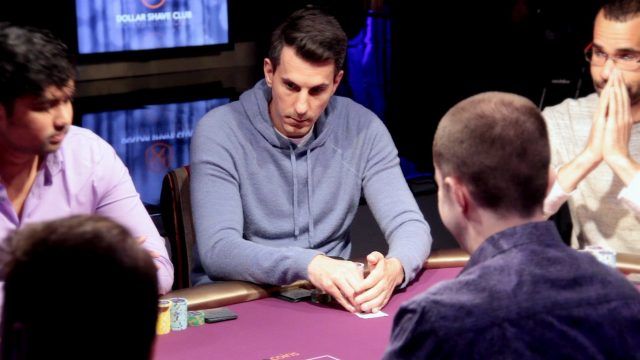 He played in the biggest tournament in poker history, the £1.050 million buy-in Triton Million held in London in August 2019, but failed to make it into the money.

Haralabos Voulgaris is yet to win his first WSOP gold bracelet.

In fact, he’s only cashed in two World Series events. However, those two cashes are for a combined $1.184 million in total.

At the 2017 WSOP, he got to the final table in the $111,111 Big One for One Drop high roller event. That final table featured such poker greats as 2014 WSOP Main Event winner Martin Jacobson, Dario Sammartino, Bertrand “Elky” Grospellier, and the eventual winner Doug Polk.

Voulgaris managed to take 4th place in this star-studded field. He won $1.159 million, which is the biggest single live tournament score of his career to date.

In October 2017, Voulgaris appeared on PokerGO’s revived version of Poker After Dark. He played a super high stakes, $300/$600 NLHE cash game session against Phil Galfond, Bill Perkins, and others.

There’s no account on any poker site known to be affiliated with Voulgaris.

As we wrote earlier, Voulgaris originally made his money by betting on the over on total points scored in the second half of NBA games. In 2000, he bet $70,000 on the Los Angeles Lakers winning the NBA championship at 6.50 odds – and won.

In 2007, he hired an unnamed math prodigy to build a statistical model that would help them predict NBA games. After two years of development, the model Ewing was made.

In 2018, as a recognition for his work in the statistical analysis of basketball games, Voulgaris was hired by the NBA team Dallas Mavericks as Director of Quantitative Research and Development.

In it, he mentioned a “former NVG superhero” poker pro owing him 7-figures after he agreed to place bets for him with an unknown bookmaker. NVG stands for News, Views, and Gossip which is the “tabloid” section on the most popular online poker forum, Two Plus Two. By “NVG superhero”, Voulgaris meant one of the famous pros who would post in there and take part in the discussions.

After this revelation, some in the online poker community – most notably, Doug Polk – started to speculate who the unnamed debtor might be. Based on the interview and the context, Polk concluded that in his opinion, it was most likely online poker legend Tom Dwan.

Here’s verbatim what Voulgaris said about the situation:

“I had this guy who was making bets on my behalf, this NVG superhero. And then, I haven’t gotten paid since like 2013 or 2012. So now I’m wondering if the guy actually made the bets or he just didn’t actually make the bets with the bookmaker, or the bookmaker didn’t exist. Something happened. I don’t know, it’s a weird situation.

I’m wondering if people can actually guess who it is, I’d be shocked if people know who it might be. (…) But I will say, this person is basically one giant excuse after the other as to why he can’t pay me the money that he owes me.”

What made people even more suspicious was that in March 2017, Voulgaris publicly messaged Tom Dwan in a now-deleted tweet, asking for his contact information and claiming he’d been trying to get in touch with him unsuccessfully.