Taking 2020 by storm, Asia’s leading online poker site Natural8 – GGPoker network continues to bring its users nonstop action as a strong start to the last quarter of the year. Coming from a hugely successful past couple of months, the prime network has scheduled yet another lineup of great value tournaments and generous promotions for its wide player base.

The Bounty Hunter Series currently happening now up until the 25th, features a total of 350 progressive knockout events and is set to award over $40 million in prize guarantees. Running alongside the festival is the World Poker Tour Asia Online Series wherein champions of its 22 trophy events can claim live event sponsorships on this Natural8 exclusive deal. Adding more excitement to this month of October, $4.3 million in promotion giveaways is up for grabs across a variety of daily leaderboards. With so much in store, Natural8 players of all bankroll levels can tune in to their devices and sign up for the latest games for a fair share of the many prizes up for grabs. 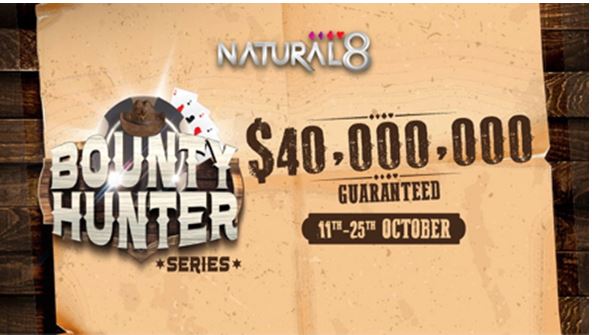 A new series hits the Natural8 – GGPoker network this month as a whole schedule of 350 progressive knockout events is scheduled to play through the next few weeks. The popular format which instantly credits the opponent’s bounty to the player’s account upon elimination is a great way to boost one’s bankroll and to encourage overall action. The Bounty Hunter Series is set to cover $40 million in guarantees with buy-ins ranging from as low as $5.25 to as high as $10,300 for the Super MILLION$ Bounty Hunters event.

Big events to look forward to include the awaited weekly GGMasters events with the High Rollers on the 18th and 25th posting a $1,000,000 prize pool guarantee each. The $157.50 GGMasters bounty event held every Sunday will likewise cover a juicy guarantee of $500,000 while those looking for a more modest option can opt to play the $25.20 GGMasters Daily Bounty tournament available several days of the week with a $50,000 guarantee split among its lucky winners.

Numerous special edition tournaments such as the Bounty King Main Event and the High Roller edition with buy-ins of $315 and $3,150 respectively both come with a guarantee of $150,000. Other key events also include the $10,300 Super MILLION$ $1 million guaranteed event held on Sundays and the $210 Main Event on Saturdays for a $500,000 prize pool.

Adding more flair to the fresh series, an overall leaderboard will award its top 100 finishers a share of the $100,000 cash prize to be awarded. With multiple satellites available every hour of the day, players looking for action can simply click on the Bounty Hunter Series tab on the application for a full overview of ongoing tournaments.

The World Poker Tour Asia Online series running through the 25th has a lot of Asian players eager to scoop a WPT trophy from its 22 official key events. One of the biggest online series in Asia, the festival is set to cover a total of HK$100 million (~US$12.9 million) throughout the three week period.

While the series is available on other skins of the GGPoker network, Natural8 brings its players an exclusive deal for a chance to win bonus WPT live event sponsorships worth up to HK$25,000. For every trophy event winner, Natural8 players are eligible to receive a HK$10,000 WPT live event sponsorship while the Main Event champion will walk away with a HK$25,000 deal. With a total of 22 trophy events scheduled, Natural8 players will get 22 chances to scoop up the amazing bonus in addition to having already won a prestigious WPT event. 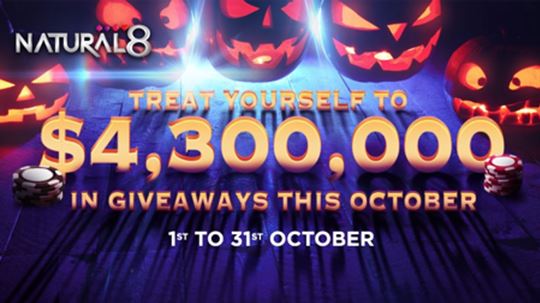 With this year’s online poker action reaching all-time heights, Natural8 – GGPoker network has arranged to shower its players with more rewards this month of October. A whopping $4.3 million in promotion giveaways awaits players looking to top daily leaderboards in a variety of poker games. Awarding over $100,000 spread out across multiple leaderboards each day, players have 31 chances to rack up as many points as they can and claim their fair share of prizes.

Two of the most popular poker variants, Hold’em and Omaha cover the biggest share of prizes to be won, amounting to over $1.2 million for this month alone. A $20,000 leaderboard for each variant will be available every single day with players earning one point for every raked hand played and a 1.5x points boost during Happy Hour (22:00-24:00 UTC-7). With nine different stake levels to choose from for Hold’em and ten for Omaha, players of all levels will have a chance to collect a portion of the allotted cash prize.

Originating from Asia, the Short Deck or otherwise known as 6+ variant has quickly gained a following with its fun-filled action and exciting plays. Similar to the previous leaderboards, points are awarded for every raked hand played, with 1.5x points awarded during Happy Hour (22:00-24:00 UTC-7). Nine different stake levels are likewise available to players looking to accumulate as many points for the $7,500 Short Deck daily leaderboard.

Rush & Cash has been an integral part of online poker with players not eager to wait for a hand, taking advantage of its fast-fold format. Available in both Hold’em and Omaha variants, $33,000 in cash prizes is set to be awarded daily for players who have earned the most points. Unlike other games, players accumulate points for every action made during a hand (+1 point for a call, +2 points for a bet/raise and +3 points when all-in insurance is purchased) with double points awarded during Happy Hour (22:00-24:00 UTC-7).

In addition to testing your luck in the Spin & Gold games, Natural8 is back with a $20,000 daily leaderboard separate for each of the seven stake levels available. Players who take part in the sit-n-go’s are automatically eligible for the leaderboard with “gold” awarded based on one’s rank. Just like the other games mentioned above, players will receive a 1.5x points boost when played during Happy Hour (22:00-24:00 UTC-7).

The All-In or Fold (AoF) format which makes gameplay simple and easy awards players who play 100 AoF hands per day, a 1 free buy-in instantly. With seven different stake levels to choose from and challenges to be reset everyday, the possibilities of cashing in on this giveaway seem endless.