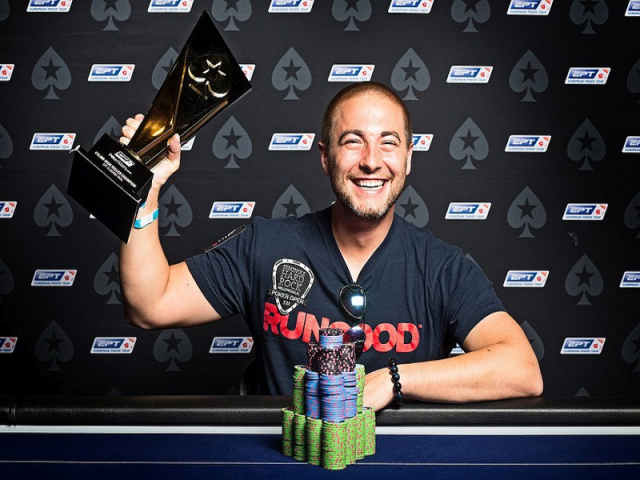 Chance Kornuth is an American professional poker player. He was born on June 24th, 1986 in Denver, Colorado.

Overall, Kornuth has cashed for nearly $7.5 million in live tournaments during his career. He is also the founder and owner of the poker coaching site Chip Leader Coaching.

Kornuth grew up in Colorado with his older brother, Adam. The two boys have always been super close.

As Chance told the Poker Stories Podcast in October 2018, his brother was the one who introduced him to poker. The brothers would play on their father’s online poker account as kids. However, Adam quit after Black Friday rocked the American poker world in 2011.

Meanwhile, Chance was studying architectural engineering at UC Boulder – and not being too sure about his career choice. So much so that he dropped out only one semester away from graduating. By then, he was making enough money by playing poker to confidently pursue playing cards for a living.

Kornuth’s Hendon page shows an impressive $7.450 million in live tournament cashes. He amassed that some by cashing in 130 different events over the course of 12 years.

He’s known not only for his great results on the live felt, but also for being one of the few players from the younger generation who relies a lot on live tells in his strategy.

Given the fact he started his career as an online player, this caused some problems for him initially, when he started playing high buy-in live events. Here’s what he had to say about this issue on the aforementioned Poker Stories Podcast:

“[Live poker] is the same game [as online poker], but there’s like an extra element of information. And I’ve always been, like, so interested in that extra element of live tells and physicalities and stuff like that, that I think I was a little bit too much experimenting and kind of looking for excuses to do stuff. Fortunately, it’s one of the reasons why I’m so good at live tells now.”

He kept delivering a few thousand dollar-scores, until he won his first bracelet at the 2010 WSOP for over half a million. The first time he made a 6-figure cash outside the WSOP was four years later. In April 2014, he came in 6th in the $3,500 NLHE event at the WPT Seminole Hard Rock Showdown for $247,954.

Kornuth took 3rd place in the $10K Main Event at the 2015 PokerStars Caribbean Adventure. He took home $641,140 for that performance, which is the biggest single live tournament score of his career to date.

Despite not having any million-dollar paydays, Kornuth has some major victories under his belt on the live tourney scene.

Kornuth also took part in the 2019 Poker Masters, a short high roller series which awards the Purple Jacket to the player with the best overall results in the 10 events. He racked up 3 runner-up finishes, which wasn’t enough for capturing the title which went to Sam Soverel.

In 2017, he came very close to capturing another bracelet. He ultimately busted in 2nd place for $399,132 in the $3,000 No Limit Hold’em event. He lost the heads-up dual for the bracelet to Harrison Gimbel.

In 2020, when the coronavirus pandemic forced the entire World Series to take place online, Kornuth took 2nd place again, this time in the $500 NLHE Turbo Deepstack event for $79,291.

Overall, Kornuth has cashed in 33 World Series events for a combined $1.845 million.

Kornuth appeared on season 5 of the CBS Sports show Poker Night in America. There, he played $100/$200 No Limit Hold’em – stakes unusually high for the show. The episode aired in March 2018.

In September 2017, Kornuth played an even higher stakes cash game, $300/$600 PLO (the minimum buy was a cool $100K) on Poker After Dark’s “PLOMG” week. This was on PokerGO’s revived version of the classic NBC show.

The “PLOMG” line-up featured some of the biggest names in poker, such as Phil Galfond, Isaac Haxton, Tom “durrrr” Dwan or Daniel “Jungleman” Cates.

Kornuth started off playing poker on his father’s account on an online poker site.

As he moved up in stakes, he mainly played tournaments under the screen name “Chances Cards” on PokerStars, Full Tilt, and – unfortunately for him – UltimateBet. We write unfortunately, because the latter site’s users were most affected by Black Friday – some of them are waiting for their money to this day.

However, luckily for Kornuth, he was able to receive his funds years after the room’s closure.

As we wrote earlier, Kornuth won an online WSOP bracelet in 2018. Playing under the screen name “BingShui” on WSOP.com, he finished first in a field of 480 players for over $340K. He also has a runner-up finish from the 2020 WSOP Online No Limit Hold’em Turbo Deepstack 6-Handed event for $79K.

In January 2020, it was announced that Kornuth would take on Phil Galfond in the “Galfond challenge” later that year. This is a challenge Galfond issued to the poker world to promote his online room RunItOnce. He’s taking on players in a series of high stakes ($100/$200 or more) PLO cash games with side bets on the line as well.

The winning streak for @ChancesCards continued last night, as he found himself adding another $99,000 to his lead. These two are taking the rest of the week off and will return to the virtual felt next Tuesday. #GalfondChallenge pic.twitter.com/FZ1lVz7U7U

Chance Kornuth is the founder and owner of Chip Leader Coaching. They employ such famous poker pros as coaches as Joe McKeehan and Alex Foxen.