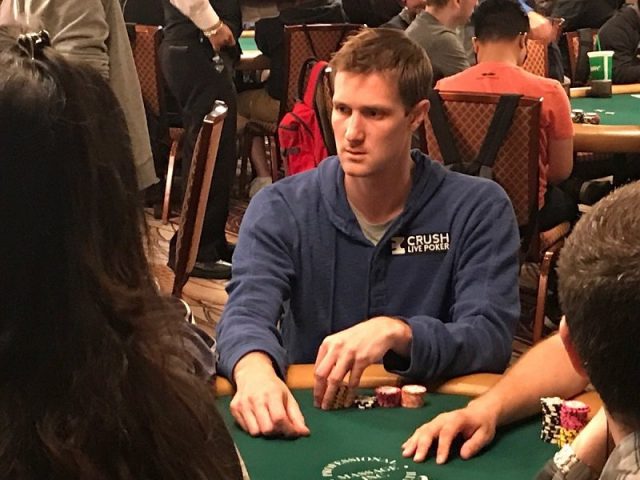 Brad Owen is an American professional poker player and poker vlogger. He was born in 1988.

Owen specializes in low to mid-stakes cash games, mainly in the Las Vegas area. He records himself playing these sessions, along with footage of his preparation and commentary, then uploads these vlogs to his popular YouTube channel. He currently has 260,000 subscribers, as of the time of writing this.

In addition, he has $14,409 in live tournament earnings – very low for a professional player. However, it’s understandable given the fact that he’s always put most of his volume into live cash games.

He and his close friend and fellow poker vlogger Andrew Neeme regularly organize so-called “meet-up games” where they and their fans play fun, low stakes cash sessions against each other.

In March 2020, Owen was featured in a video on 888Poker’s YouTube channel where he recanted the story of his career.

In it, he talked about how he first encountered poker in 2003. His father got a job in the casino industry, so he got a software called “Hoyle Casino” to learn all the casino games through simulations. The young Bradley Owen also played with the program for fun – he especially got hooked on the simulated Limit Hold’em tournaments.

However, he decided to move back to California to be with his girlfriend. There, he busted his bankroll – this major blow forced him to move back to his parents and got an accounting job. Since he despised his new profession, he saved up enough for a bankroll again, quit, and got back to the tables to play full-time again.

Since then, poker has been working out for him once more. He started vlogging in 2016. The first video titled “Poker Vlog Episode 1” was uploaded to his channel on December 2nd, 2016.

Owen has a modest $14,409 in live tournament earnings, according to his Hendon page. As we wrote in our intro, this number is low because he’s been focusing on live cash games for his whole career.

He has 5 recorded live results, two of which are from WSOP events.

The first recorded cash on his page is from July 2016. He came in 139th in the $600 NLHE Goliath event for $971 at the Goliath Phamous Poker Series at the Planet Hollywood Casino in Vegas.

Brad Owen is yet to win his first WSOP gold bracelet.

However, he’s been a lot more prolific in online WSOP events. In 2020, when all tournaments had to be played online due to the coronavirus pandemic, he cashed in an impressive 9 of them.

This is Owen’s bread and butter when it comes to poker.

You can follow him playing live cash for a living in various casinos, mostly in Las Vegas, on his YouTube channel. He usually plays mid-stakes, in $5/$5 and $5/$10 No Limit Hold’em cash games. The highest stakes he’s played is $10/$25.

In August 2018, he was featured on another LATB stream. This time, he faced fellow poker vloggers Andrew Neeme and “Johnnie Vibes” Moreno. In a hand on that stream, Owen flopped the nut flush over a lower flush against Johnnie Vibes. However, Vibes was able to get away with an astute fold after Owen 3-bet over his flop check-raise.

Owen has also appeared on Run It Up Reno’s live streamed games. In August 2019, he played a session of $5/$5 NLHE against his friend Andrew Nemme again, as well as Jamie Kerstetter and Jason Somerville.

Owen isn’t much of an online poker grinder.

However, during the 2020 coronavirus pandemic, he had no choice but to put some volume in on the virtual felt.

He played a number of WSOP Online events with good results – we wrote about his cashes earlier, including his ITM finish in the $5,000 WSOP Online Main Event.

He played under the screen name “MrMonkeyBear” on WSOP.com. However, there aren’t any tracked results – cash games or tournaments – tracked on that account, nor on any account known to be affiliated with Owen.

Brad Owen’s YouTube channel, as of writing this, has 260,000 subscribers. The vast majority of his content is him recording himself playing small to mid stakes cash games.

Owen continued to upload a few more times that month. In his profile piece with 888Poker, he reminisced about how he would have to hide the fact that he was recording his hands, fearing that casinos wouldn’t allow it. However, with his popularity, it all changed – now casinos invite him to shoot his vlogs on their premises.

While that surge of new viewers eventually stopped, Brad Owen is still one of the biggest poker creators on YouTube with 260,000 subscribers and about 1.6 million average monthly views.