The 2021 World Series of Poker Online [International] has officially kicked off at online platform Natural8 [GG Network] and like its USA counterpart, 33 signature bracelets headline the festival. The past days have already witnessed a blazing platform with over 32K entries across two opening events. Poland’s Bartlomiej Swieboda and Brazil’s Joao Simao charged to victory to lock up their first ever dream gold and six figure cash prizes. For champion Simao, he also won a Natural8 Team Bling sponsorship worth US$ 10,000. Another N8 player running well was Vietnam’s Cuong Trinh who missed the gold by one spot. We’ve got those stories for you below. 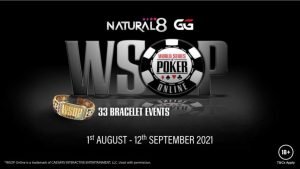 The series runs from August 1 to September featuring US$ 53+ Million in guaranteed prize pools. Over US$ 2.7 Million has already been paid out. 31 bracelets remain. For players that sign up on Natural8, expect plenty of added perks amounting to US$ 400,000 in exclusive prizes. You can read up on those perks at the bottom of the page or via this link:

First to take off was the WSOP #1: $50 The Return NLH, $1M GTD which was the cheapest buy in bracelet event scheduled and the first of 13 events featuring a guarantee. Leading up to the final day were 10 qualifying heats that drew a massive 30,810 entrants. This more than crushed the guarantee for a richer US$ 1,417,260 prize pool. 3,584 advanced with 1,600 earning a share of the pot. After 8 hours and 20 minutes of final day action, Bartlomiej “Chester20o” Swieboda overcame a deficit at heads up against Vietnam’s Cuong Trinh to give Poland its first ever gold bracelet. In addition to the shine, Swieboda turned his US$ 50 to a career high score US$ 161,110.

The final table ran just under two hours. Vietnam’s Cuong Trinh delivered the first blow with Matheus Andrade “durezabh” De Souza on the receiving end. With stacks deep, it took another 35 minutes before the next bust. Along the way, Costa lost a succession of pots to drop to the lower ranks. His final hand saw a turn board

sent him packing in 8th place while Zabiyakin amassed an enormous stack. Plenty of big pots continued to shuffle around the virtual felt with Trinh initiating most of the action. This led to his stack swinging and to the downfall of two players, Sergey “sit_boom777” Sitnikov and Matheus Hilario “tio_ricco” Dos Santos, both falling to Trinh two minutes apart. Sitinkov’s

was dominated by Trinh’s

Short stacked Alexander “OMGWTF!!” Jung couldn’t get in the action but did ladder up to 5th place. At four handed, Trinh and Zabiyakin tangled ending with Trinh scoring two-thirds of the chips in play as

two pair, on a board

. Zabiyakin lost another costly pot, this time to Swieboda who had been quiet up until the double up. Down to 4bb, Zabiyakin busted to Trinh who then proceeded to finish off Eran “Ma_Yesh_Beze” Soffer a few hands after.

Carrying the drive into heads up, Trinh looked to be headed for the gold as he climbed to a 5:1 chip advantage however Swieboda took a stand and rivered a flush

straight. From there, Swieboda attacked the felt to drag in consecutive pots and take the lead. The winning momentum widened his lead to nearly 3:1 but again Trinh reclaimed it on a double up with

two pair on a board

. Command switched once more when Swieboda won a pot with top pair to second pair. From there, Swieboda pulled away. The final hand saw Trinh all in with

. Both players walked away with six figures with Swieboda earning the bigger cut and the gold.

The Caesars Cares Charity Event was the second bracelet event with proceeds for the benefit of US-based Caesars team members greatly affected by Covid-19. 1,584 entered to generate a cash prize pool of US$ 1,759,824 and a charity fund of US$ 175,824. Brazilian pro Joao Simao seized it on his third bullet to lock up his first ever gold bracelet and a WSOP high score of US$ 206,075. This was Brazil’s 11th bracelet. By playing on Natural8, Simao became the first player in this series to win a Team Bling US$ 10,000 sponsorship package.

Day 1 closed at the end of 32 levels with 20 players remaining led by Simao followed by Hungarian pro Andras Nemeth, and ring winner Claas Segebrecht ranked third. Down the line were Elio Fox (two time bracelet winner) and Spain’s Sergio Aido. It took one hour for the final table to form. Along the way Segebrecht’s

to exit 18th, Fox was stopped by Ilya “Dezauzer” Yakunin in 15th place with

full house on a board

, then Aido joined the rail in 13th place. The fall of China’s “eeeva” established the final nine.

The final table ran for 2 hours and 15 minutes. The only player hunting down a second bracelet was Norway’s Espen “_sennj_” Sandvik, everyone else was gunning for their first. Nemeth was the most decorated with nearly US$ 3.5 Million in just live earnings. At the get-go, Austria’s Roman Hrabec led in chips and Simao ranked second. The first showdown awarded Le “Hugo777” Fang a double up off Nemeth then hands later, Nemeth claimed a massive pot from Simao to catapult to the top with a 144 bb stack, average was 44 bb. Nemeth nearly added to his fortress on a face off against Sandvik, but his

After the fall of Peter “BigFishEight” Raimondi (9th), Le “Hugo777” Fang (8th), and Jinlong “yiliuqi” Hu (7th), Nemeth went on a downward swing, losing a costly pot to Sandvik. On a turn board

, Sandvik raised all in holding

trips but lower kicker, the

river doubled up Sandvik and sent Nemeth down to the shortest stack. A few minutes later, Simao’s

improved him to a straight. Following Simao’s footsteps, Sandvik did the same to Ilya “Dezauzer” Yakunin with pocket Twos burning pocket Tens with a two on the river. Simao finished off Roman Hrabec then Sandvik emptied out Tom “Jabochi” Shaham to bring about the final duel for the gold. Shaham collected the first six figure payout of the event for his largest WSOP score.

. Several minutes of heated exchanges sent Sandvik back on top, then the biggest hand came down (hand pictured above). On a board

bluff. Simao shipped it with his

flush while Sandvik plunged to just 6 bb. Sandvik shoved on the next hand with

, the board dropped a ten on the flop. Despite having been denied a second bracelet, runner up Sandvik still earned a WSOP high score of US$ 154,533.

To give more value to your buck, Natural8 players can expect added incentives amounting to US$ 400,000 up for grabs throughout the series. We’ve broken them down right here.

Win any of the 2021 WSOP Online bracelet events and you are assured entry to Team Bling along with one of these fine sponsorship packages listed:

Top the leaderboards to win a piece of the US$ 75,000 prize pool! There are ten leaderboards running throughout the series with varying prizes. Points can only be earned at bracelet events and WSOP side events. Three different LiveX packages up for grabs are listed:

Win a share of US$ 30,000 via the WSOP 2-in-1 incentive. This unique perk is only offered in Natural8. To start off, play any of the WSOP bracelet events and WSOP side events to earn points. As written on the website,

Take part in any WSOP Branded Tournaments to earn points and boost those points by playing in cash games. We’ll multiply the points you’ve earned by playing tournaments with the points from cash games to reveal your chipstack for the final WSOP 2-in-1 Challenge Flipout.

Plenty of action ahead so stick with us at Somuchpoker as we bring you recaps on the ongoing 2021 WSOP Online on Natural8.