Two bracelets awarded at Day 42 of the 2020 World Series of Poker Online [ international ]. Germany’s Christian Rudolph shipped the WSOP #70: $25K NLH POKER PLAYERS CHAMPIONSHIP high rollers event for the enviable $ 1.8 million first prize. This was his first ever WSOP victory. Norway’s Trygve Leite “FullSendWig” took down WSOP #75: $300 Double Stack No Limit Hold’em for his first WSOP title and a career high $ 130,099.98. Another champion was Brazil’s Luis Eduardo Assuncao Garla “Xapilskinha” who topped the WSOP Asia Player of the Series race. Garla was awarded the one of a kind WSOP Pure Gold Dragon trophy. We’ve got those stories for you.

The brand’s esteemed WSOP #77: $ 5,000 No Limit Hold’em Main Event with a mammoth 25 Million Dollars guaranteed, the largest ever offered in online history, is down to its final entry flight. If you haven’t yet secured a Day 2 seat, last chance happens tonight at 20:00 HKT. 950 players have already advanced out of 5,028 entries. One of the newest qualifiers was leading WSOP bracelet holder / world renowned pro Phil Hellmuth. Holding strong up top is Australian pro Kahle Burns with a commanding 277.5 BB stack.

The 2020 WSOP Online [ international ] has been running since July 19th on Natural8 – GG Network. 44 bracelets have been claimed and a cumulative $ 94.4 million paid out. Only 10 bracelets remain. The series runs until September 6th. If you are looking to get in cheap at select remaining events, WSOP Silk Road is the route however today is the last day of that series. Only five tournaments are left to try to seize winning tickets. For first timers, make sure to sign up on Natural8. Fantastic promos and incentives are in store. Read about it at the bottom of the page.

After a weeklong break, the final 9 players of the WSOP #70: $25K NLH POKER PLAYERS CHAMPIONSHIP high roller bracelet event returned to action. While American pro Jason Koon kicked off with the chip lead, it was Germany’s Christian Rudolph who claimed the throne for his first ever WSOP title and bracelet. Rudolph was awarded the enormous $ 1,800,290 first prize to become the largest earner in a single event this series. He also won a $ 15,000 WSOP Europe Package. Online sensation Chris Hunichen took runner up for a hefty payout as well of $ 1,332,097.

Prior to this incredible win, Rudolph already had 23 WSOP live cashes amounting to over a million dollars. He reached the final table three times with the gold at his fingertips at the 2018 WSOPE € 25,500 Super High Roller Series finishing 2nd for € 524,532. With this win, he bumped up his WSOP winnings to nearly $ 3 million.

Recapping the final chase, Aliaksei Boika “BladeRunner1” (9th) was first to fall at the hands of Shankar Pillai “Saquon”. Koon lost his lead to Hunichen when his A-J offsuit missed against pocket Queens for a costly double up. After Aram Zobian “Pusha T” eliminated $1K Ultra Satellite qualifier Paulius Plausinaitis “ChickenBBQ” (8th), Rudolph claimed his first of five heads with Koon on the bitter end. Rudolph’s A-Q found an Ace on the board to dust pocket tens. Next two on the German’s hit list were Brunno Botteon (6th) and Zobian (5th). This gave Rudolph the lead which he held to the finish.

More chips for Rudolph with Aleksejs Ponakovs downed in 4th place. To enter heads up, Hunichen eliminated Pillai with only a one million chip deficit against Rudolph.

The final gold chase clocked in at 18 minutes. Rudolph took command, building a 5:1 gap. Hunichen grinded back but still wasn’t able to overtake Rudolph. When the lead was up to 12:1, Rudolph nailed it shut with Q-10 lucky against K-Q to become the most envied WSOP Online [ international ] champion.

The WSOP #75: $300 Double Stack No Limit Hold’em was the last ASIA TIME ZONE event to accrue points towards the WSOP Asia Player of the Series race. A rush of 3,552 entered to help boost the prize pool to $ 991,008. Just under twelve hours of play, Norway’s Trygve Leite “FullSendWig” emerged victorious to capture his first gold bracelet, largest score of $ 130,998.98, and a $ 15,000 WSOP Europe Package. He became the first Norwegian to win this series, bumping up the country’s overall bracelet tally to six.

For a brief background on the champion, including the win, it was Leite’s 7th deep run this series. He also had 9 WSOP cashes throughout his career. Leite’s previous high score was for 1st place at the 2019 PPPoker Live Festival World Championship High Roller event in the Philippines for $ 23,998.

Leading up to the final table, Emanuele Monari “BudSpencer” railed two players during the final 16 to carry in an intimidating monster stack. Trygve Leite “FullSendWig” was running second in chips. Surrounding them were two WSOP ring winners Gregory Ronaldson “C0bb” and Paul Lozano “Pistolero99”. The most decorated of the pack was American pro Connor Drinan with $ 11.2 million in live earnings and 42 WSOP cashes. Drinan was also on his 13th cash this series and second final table.

With the chip lead seized, Leite proceeded to muscle the felt, leading to the fall of Lozano for a third player slashed by the charging Norwegian. Monari tried to catch up, finishing off Ronaldson (5th) and Elyashiv (4th) however Leite surged further ahead after eliminating India’s Anjali Agrawal “Iwanashipit” in 3rd place.

Ahead roughly 2:1, it took one tough hour for Leite to close it out. During that time, Monari displayed an impressive uphill climb however, Leite’s lead simply could not be breached. Leite went on to win it for his first WSOP title and bracelet.

Ever since Brazil’s Luis Eduardo Assuncao Garla “Xapilskinha” won the WSOP #55: HK$ 8,000 NLH Asia Championship, he has held pole position in the WSOP Asia Player of the Series race. Last night was the final chance for players to try to steal home, however, it was not to be. Garla’s points remained intact to be crowned winner and claim the one of a kind WSOP Pure Gold Dragon trophy.

It is down to the wire at the WSOP #77: $ 5,000 No Limit Hold’em Main Event [ $25M GTD ] with one final entry flight to qualify into Day 2. Once completed, the next stage in the race takes place at August 30 @ 18:30 UTC / August 31 @ 02:30 where the qualifiers play down to the final 40 players. Australian pro Kahle Burns continues to lead with a massive 277.5 BB stacked. Jonathan Dokler “Serenity” is ranked second with 204.4 BB. Among last night’s qualifiers were Phil Hellmuth, Ryan Reiss, Joao Vieira, Shankar Pillai, Michael Clacher “YesPlease”, Sergio Aido, and Michelle Shah “hu4trollzz”.

It was anyone’s game at heads up between Mikhail Aleksandrov “zyxel777” and Tom Delaine “Pik00rs” at the $ 400 Six Handed side event. Both players tugged at the chip lead until a pocket pair war determined the final outcome. Aleksandrov defeated Delaine with pocket Aces turned quads to obliterate pocket eights. This was Aleksandrov’s first win this series.

Since “giannnn” first side event win three nights ago at the WSOP Side Event $800 PLO Encore, it has been deep run one after another. The following evening, giannnn placed 2nd at the $ 1,5000 Deepstack, then last night he placed 2nd at this event – $ 200 Second Chance – falling only to champion Dearfriendoz. This was Dearfriendoz’s first win this series. 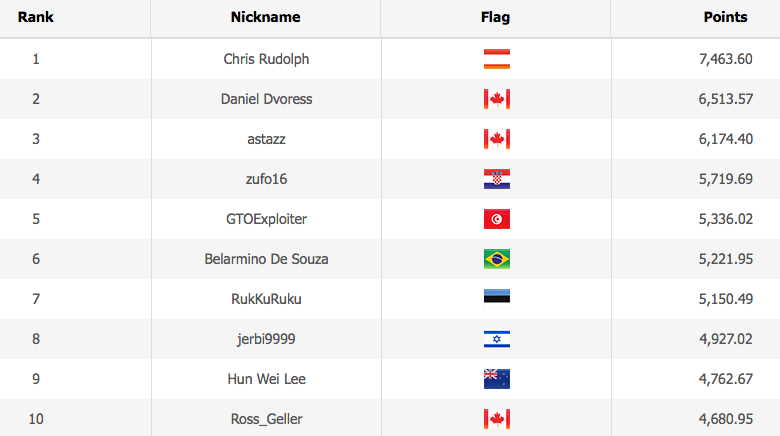 For those looking to enter bracelet events for cheap, the WSOP Silk Road is the way to go. Last chance to win tickets tonight to select events. For some inspiration, Alek Stasiak “astazz” earned his seat to WSOP #33: $1,111 Every 1 for Covid Relief via a $10 qualifier which bought him a seat in the $100 satellite to the above-mentioned bracelet event which he shipped for $ 343.2K. If you are interested in non- bracelet events, several WSOP side events are scheduled with buy ins from $ 200 to $ 3,000. Popular network tournaments are also on offer: GGMasters $ 150, $ 500K and the High Rollers Super MILLION$ $ 10K, $ 2M GTD.

First time depositors on Natural8 can expect a special bump in the load. For a minimum deposit of $20 are gifts worth up to $ 100 over six consecutive days. The initial $ 60 in WSOP tickets – WSOP Satellite and WSOP Spin & Gold, another $ 40 in WSOP tickets for those that complete all 6 AoF challenges of 100 AoF hands per day.

ALERT! Only 5 WSR tournaments left to win tickets to select events! The WSOP Silk Road Micro Series has been ongoing since July 1st and will run until August 31st. This is for players looking to enter bracelet events for cheap. And seriously, who wouldn’t want to win a multi million event for as low as $ 1.08? Via this route, buy ins only go as high as $ 21.60. Top the Natural8 Silk Road Leaderboard to win an instant ticket to the WSOP #77: $5,000 Main Event [ $25M GTD ].

Plenty of action still to come so stick with us at Somuchpoker as we bring you daily updates on the ongoing 2020 WSOP Online on Natural8.