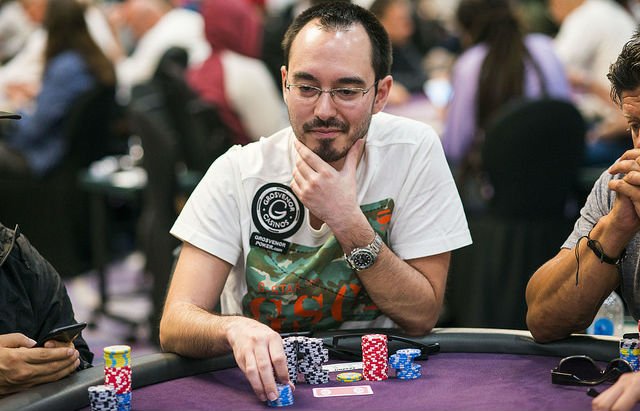 Will Kassouf is a British professional poker player. He was born on December 19th, 1981.

He’s best known for his habit of constantly speaking through hands he plays live, something he likes to refer to as his “speech play”. This certainly drew a lot of attention to him, especially during his deep run in the highly publicized 2016 WSOP Main Event. It gained him many fans – however, many haters as well. In some instances, people called for penalties for him as some of his behavior supposedly broke WSOP rules.

His catchphrase “9-high like a boss!”, is stuck in the collective memory of the online poker community after a memorable bluff in the 2016 WSOP Main Event.

His reputation has been greatly tarnished by his 2018 chip palming scandal.

Kassouf was a practicing lawyer in London. In his pastime, he would often go to the Grosvenor Casino, The Victoria, or simply “The Vic”, where he would play low stakes cash games and tournaments.

As time passed, Kassouf’s winnings at the poker table increased, and, naturally, so did the stakes he played on. In the meantime, he also practiced how to manipulate his opponents with his table talk.

According to the bio page on his own website, it was 2013 when he decided to pull the trigger and quit his lawyer job to become a professional poker player.

Kassouf has won $1.450 million in live tournaments during his career, according to his Hendon page. That sum is the product of exactly 100 ITM finishes over the course of 11 years.

The first recorded cash on his profile is from January 2009. He came in 21st in the £1,060 NLHE Main Event at the first Brighton leg of the Grosvenor UK Poker Tour for £1,760. If we go by what he states in his bio on his website, Kassouf has played a bunch of small buy-in tourneys in London before this which are untracked.

He spent the next couple of years delivering cashes from low and mid stakes tourneys in England, Ireland, and sometimes the US. As we mentioned above, his big break came at the 2016 WSOP Main Event – more on that later.

2016 was a very prolific year for Kassouf overall.

In September 2016, he finished 2nd in the £550 NLHE Deepstack event for £30,000 at the September Deepstack series in Rob Yong’s famous Dusk Till Dawn poker room in Nottingham.

During his deep run, he was involved in many hands that he made memorable with his signature “speech play”. Perhaps the most famous instance of that is when he bluffed Stacey Matuson off of an overpair with 9-high. That is when he uttered what later became his catchphrase, “9-high like a boss!”

However, after his successful bluff, he received a one-round penalty and a scolding from WSOP tournament director Jack Effel.

Overall, Kassouf has cashed in 7 World Series events for a total of $371,136 combined.

As we wrote above, Kassouf started his poker journey playing low stakes cash games and tournaments at Grosvenor Casino, The Victoria in London.

In September 2017, Kassouf appeared on a stream of Live at the Bike, where he played a session of $5/$10 No Limit Hold’em cash game.

During the stream, he flopped Quad 6’s against Derek’s full house. To make things more painful for his unlucky opponent, he “tanked” for 3 minutes on the river, pretending to be contemplating folding the nuts. Meanwhile, another player at the table insisted he folded the 6 of Spades until Kassouf revealed his hand.

This kind of showboating is referred to as “slow rolling” in poker, and it’s considered to be very rude among professional players. Despite that, some players, such as Kassouf or – notoriously – Shaun Deeb, believe it’s just a bit of harmless fun and tend to do it when they’re given the opportunity.

Kassouf was never a real online grinder – he doesn’t have any well-known accounts with tons of recorded MTT or cash game winnings on any site.

However, in 2020, when all of poker was forced to move online due to the dreaded Coronavirus pandemic, he bagged a big online score as well.

The constant criticism of his “speech play”

Kassouf’s unique speech play isn’t sitting well with everyone in the poker community.

Many believe his gimmick actually violates standard poker room house rules on a regular basis. As you can see in the clip from the 2016 WSOP above, the World Series forbids “talk that influences action”. It is certainly illegal in most poker rooms in the US and Europe to share information about a player’s hand while it’s still live.

During the 2016 Main, Kassouf got into another memorable quarrel at the table about his tendency to talk incessantly at the table. This time, it was Canadian pro Griffin Benger who eventually exploded at Kassouf, calling his banter “verbal abuse”.

Unfortunately for Kassouf, that hand was his last in his Main Event run.

In September 2018, Shaun Deeb (a personal foe of Kassouf’s, after the Brit allegedly hit on Deeb’s wife) broke the news on Twitter that Kassouf was caught stealing a £100 chip from a friend of his.

According to the allegations, Kassouf and his posse were drinking and gambling at Grosvenor Leeds Watergate Casino. A member of the group scored a big, £2,800 roulette win. While receiving the payout and celebrating, Kassouf decided to hide a £100 chip in his palm.

Initially, the online poker community was skeptical about Deeb’s claims, especially given the known animosity between the two. However, a member of the friend group came forward on Facebook and confirmed the story. Soon, Kassouf himself admitted to the misdeed and apologized for it.

This ended up costing him his sponsorship with Grosvenor’s.