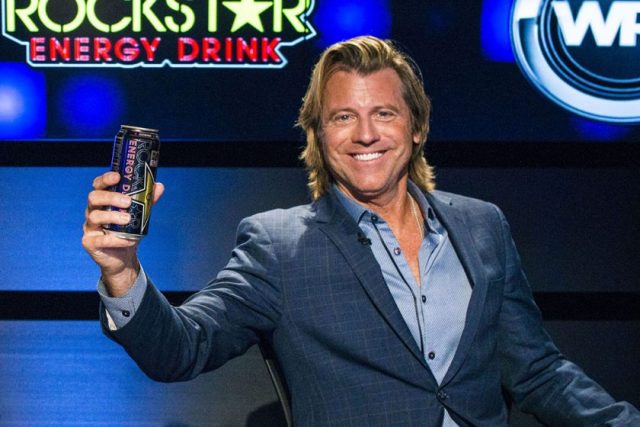 He is the son of Hollywood actor Dick Van Patten. Vincent Van Patten started out as a child actor. He has appeared in a vast number of movies and TV shows. His roles include the 1973 Disney movie Charley and the Angel, the 1979 cult classic musical-comedy Rock n’ Roll High School; as well as the popular TV shows Bonanza, The Six Million Dollar Man, and Baywatch.

In 1979, at the age of 20, he also started playing tennis on a professional level while continuing to work as an actor on the side.

As for poker, he was playing in his father’s Hollywood home games from a very young age. He’s been an avid recreational player ever since. He later started to organize his own private cash games.

Van Patten got a gig as a regular commentator at World Poker Tour events in 2003, only a year after the famous tourney series’ inception. As a player, he has a little over $100,000 in live tournament cashes to his name, including an ITM finish in the 2010 WSOP Main Event.

His net worth is estimated to be around $2 million.

Van Patten worked as a child actor. He got his first role at the age of 13. He had many connections in the film industry since his father, Dick Van Patten, was also a famous actor.

It was his father who taught him how to play poker as well, when Vince was just 14 years old. The older Van Patten used to host home games for his famous Hollywood friends, such as Don Adams or Gabe Kaplan – the young Vince was also playing in these games.

Later, in the 1990’s. Vince Van Patten put together his own Hollywood home game with such famous regulars as Ben Affleck or Tobey Maguire. Van Patten was an avid player, playing 3 nights per week.

You can learn all this about him through the interview he did with Cardplayer Lifestyle in April 2017.

In 2003, Van Patten was hired as a commentator for World Poker Tour events. Him and Mike Sexton doing the commentary has been a staple of WPT events ever since.

Since then, he’s been playing more tournaments as well – his Hendon page, which we discuss in the next section, shows only one cash from before, and 6 cashes after his 2003 involvement with the WPT.

According to that Hendon page of his, Van Patten has $104,383 in live tournament earnings – as we mentioned, they’re from 7 different events.

Then, there’s an over a decade long gap on his poker resume. His next cash is from November 2006 – 11 years after his first cash, and 3 years after he got his WPT gig which made him more involved in poker.

What’s more, that “cash” wasn’t even a proper money finish in a tournament. He played in a WPT Fathers and Sons Special event. In the 6-handed “Sit&Go”, he finished last for no money with his father, behind the likes of Doyle and Todd Brunson; as well as Garry Greenstein and his son, Joe Sebok.

Van Patten was finally able to actually win some money in a poker tournament at the 2007 WSOP.

Van Patten is yet to win his first WSOP gold bracelet.

In 2010, he was able to make it in the money in the biggest poker tournament every year, the WSOP Main Event. He finished 481st in a field of 7,319 players for $27,519. That year, the Canadian Jonathan Duhamel won poker’s most coveted title.

Van Patten’s other WSOP cash is from the $1,500 No Limit Hold’em Shootout event in 2007. He came in 82nd place for $6,757. “Shootout” is a rare tournament type in which every table plays out like a “mini-tournament”. The winner of each table gets to advance to the next round, where new tables are drawn from the previous round’s winners.

Van Patten has mostly played in private cash games in his poker career.

However, he has never appeared on any TV show or online live stream where he would play live cash publicly.

There is no account on any poker site known to be affiliated with Van Patten.

His other major TV credits include the Western series Bonanza, The Six Million Dollar Man, and 1975 TV series adaptation of Wonder Woman.

As for movies, he played in the 1973 Disney movie Charley and the Angel, the 1979 cult classic musical-comedy Rock n’ Roll High School, and the 1987 made-for-TV sequel of the classic war movie The Dirty Dozen.

His love for poker converged with his acting career when he starred in the 2019 movie 7 Days to Vegas, which is about prop bets between Hollywood gamblers.

→As a Tennis Player ←

Van Patten started playing tennis professionally in 1979. He claims to be self-taught.

In 1979, he won the Association of Tennis Professionals (ATP) Rookie of the Year award.

He claims he was a top 25 player in his heyday – however, his Wikipedia page says that his highest career ranking was World No. 26 in February 1982.

He won one singles title in his tennis career. In 1981, he won the Seiko World Super Tennis tournament in Tokyo, Japan. On his way to victory, he defeated the famed American tennis “bad boy” John McEnroe.