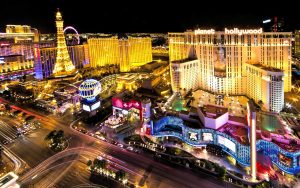 Las Vegas’ action-packed summer has officially begun with the shining city once again greeting the return of its visitors with a warm welcome. Poker players venturing out into the entertainment capital can happily play through the live scene’s busy three-week line up of events.

The schedule of great value tournaments kicked off with the $10 million GTD Wynn Millions series which ran last June 25th through July 3rd, and followed by the recently concluded World Poker Tour’s $5,000, $3 million GTD Main Event at The Venetian. Both festivals attracted record fields with its Main Event champions Chad Eveslage and Andrew Moreno becoming instant millionaires. Highlighted below is a short recap of the final table and its outstanding turnout of events.

With three starting flights across the WPT Venetian’s week-long schedule, the highlighting $5,000, $3 million guaranteed event attracted a massive player field of 1,199 entrants. The biggest buy-in on schedule had everyone pumped as the total prize pool amounted to a whopping $5,545,375, with the champion alone receiving close to a million dollars.

Popular characters to the likes of Michael Mizrachi, Scotty Nguyen, Chance Kornuth, Tony Dunst, and Jason Koon graced the event but failed to get to the final stage of the tournament. By day 4, only six players were left in contention for the $910,370 top prize and the WPT Venetian title, three of which were women – Kitty Kuo, Kyna England and Daniela Rodriguez. Although the surprising feat was a first in WPT’s 19-year history, all three women held the least stacks (less than 22 big blinds), a tough comparison to opponents Mike Liang and Chad Eveslage’s monster stacks of over 142 big blinds.

It appeared as though both chip leads were destined to go heads up as cards continuously fell their way. Taiwanese pro Kitty Kuo was the day’s first casualty having lost

, leaving her with two big blinds only to be eliminated soon after. In spite of her early double up, Rodriguez exited in fifth place after getting it all in with

. A few hands later, Tim McDermott followed the same fate after he shoved

from the small blind only to run into Liang’s

. With no help from the board, McDermott busted out in fourth place finish.

The last woman standing, England was up against two massive stacks and eventually failed to double up with

, leaving her to settle for third place and $448,755 for her impressive run. By this time, both Eveslage and Liang held deep stacks of over 115 big blinds each, gearing up for a potential long tail-end match. However, this wasn’t the case as the second hand of the heads up game instantly crippled Liang with only 11 big blinds left. Having shoved the river with

, Liang lost a huge chunk of his stack when Eveslage called and showed a king-high straight

for the crucial pot.

In much need of a double up, the final hand saw Liang shoving the last of his chips with

Securing his career-first WPT title and the $910,370 top prize, Chad Eveslage stands as the latest member of the WPT Champions Club, with his name to be engraved as well onto the Mike Sexton WPT Champions Cup.

“I guess I think pretty highly of myself sometimes, but people better than me have played more and not won, so I’m pretty fortunate“, commented Eveslage following the victory.

“This whole tournament I kept going all in and winning, I think I’m really good but anybody would have won with my luck. It feels like I’m in the Twilight Zone, where the guy is in the casino and he can’t lose“, he added.

Wynn’s biggest tournament to date was likewise an event to remember as its smashing success awarded champion Andrew Moreno a hefty payout of $1,460,106. The seven-figure score serves to be a career first for the budding player, who has already recorded outstanding results for the year prior to his most recent victory. Just last month, Moreno took down the $1,100 UltimateStack event at the Venetian DeepStack Championship Poker Series for $127,740 and with his latest win, pushes his profits for 2021 to even greater heights.

The $10,000 buy-in, $10M GTD Wynn Millions tournament garnered an even larger field, closing in on a total of 1,328 entrants across its three starting flights. By the sixth and final day, nine players were left in contention for the lion’s share of the massive $12,483,200 prize pool.

The final table play lasted roughly 11 hours even after a deal was agreed upon by the final three players. Players Andrew Moreno, Clayton Maguire and Toby Lewis were among the last ones standing with each of them having secured a million dollar payout regardless of the outcome. Talking about around $500,000 in pay jumps, the three agreed to shave 10% off of the remaining prize pool, which meant the champion would receive an additional $313,000 and the runner-up an extra $100,907. Final table chip leader Maguire soon after eliminated Lewis while eventually failing to secure the overall win when his

and two queens showed up on board.

Congratulations to Andrew Moreno (@amo4sho), champion of the 2021 Wynn Millions!

Our sincere thanks and gratitude to everyone who played and supported this event. We look forward to the bright future of the Wynn Millions and to hosting you again soon.

Moreno, having previously posted his goals for the year in social media, was highly appreciative of his excellent results commenting, “I’m grateful above all else, I think just declaring what I wanted to do was really important to me because I believed in myself and I wanted to hold myself accountable … I’m just so shocked it happened so quickly.”

*Denotes deal was made