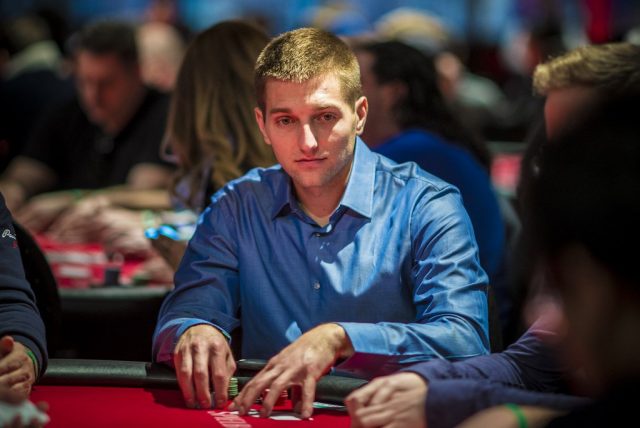 Tony Dunst is an American professional poker player and poker commentator. He was born on October 17th, 1984 in Milwaukee, WI. He’s perhaps best known for being a commentator for World Poker Tour events. He himself also won a WPT tournament, even though it was only a $300 event. He has two WSOP bracelets as well – he won the $1,000 NLHE event in 2016 and a $777 NLHE online event in 2020.

Before he started playing live tournaments around the world, he had earned hundreds of thousands of dollars playing MTT’s online. He played under the screen name “Bond18” both on the now defunct Full Tilt and on PokerStars.

Before finding poker, Dunst was struggling to find a job that motivated him. At the age of 18, he failed the written test in waiter training three times before giving up. Fortunately for him, he started making money off of poker very soon afterwards.

To buy himself some time, he enrolled in the University of Wisconsin at Milwaukee as a theater major.  Dunst said this about his major of choice and his early gambling years in a profile piece for PocketFives:

“I never dreamed of a career in theater. When I picked my major, I looked at the list and decided on the one that would be the easiest and allow maximum time for me to be a poker player. I initially took an interest in gambling during my senior year of high school when I became the school bookie. In February of 2003, I made my first deposit online, something like $80. I got it up to $400 before my parents found out I was gambling online and became upset. I stayed offline and played home games until I moved out to attend college.”

Dunst’s Hendon page shows $3.933 million in career earnings. He has 114 individual live cashes which come from a span of 14 years.

The biggest live tournament score of his is from the 2016 Aussie Millions Main Event. It has quite an interesting backstory.

According to an interview Dunst gave to pokernews.com, he had lost a A$5K chip while playing in the Crown Casino. Being angry at himself for losing that much money in such a clumsy way, he decided he wouldn’t play the Main Event.

However, an unnamed famous poker player friend of his offered to pay 15% of the A$10,000 buy-in to make him feel better – and they asked for 0% action. This was enough to convince Dunst to play the tournament and ended up taking 2nd place in the 732-player field for $700,069. He lost the heads-up match to Canadian poker pro Alan “Ari” Engel at the end.

Dunst started playing online under the screen name “Bond18” on both PokerStars and Full Tilt Poker.

According to the online MTT results database PocketFives, he has amassed a total of $1.829 million in online tournament cashes. $732K came from tournaments played on Full Tilt, 513K on PokerStars, while the remaining $584K comes from miscellaneous other online poker rooms.

The first cash on his P5 profile is actually quite an impressive one: he won a $44 tournament on Bodog Poker with 576 entries for $6.250. That result is from October 2010.

In addition, as we wrote above, his second WSOP bracelet is also from an online event, played on WSOP.com.

→ As a Poker Commentator ←

In 2010, Tony Dunst got a gig as the host of WPT’s post-game show titled WPT Raw Deal. In it, Dunst covered topics related to poker in general, as well as analysis of the play in Word Poker Tour events. The show airs on Fox Sports Net.

He served as the host for 7 years until 2017. That year iconic WPT commentator Mike Sexton announced he no longer wishes to call events for the series. Sexton moved on to become the chairman of the online poker site partypoker. WPT decided to fill the vacancy with Dunst. Meanwhile, his role as the host of Raw Deal was filled by none other than 15-time WSOP champion Phil Hellmuth.

Love working with these two and very excited for the premier of @worldpokertour Season 16 on April 29th—my first episode in the booth! #worldpokertour #pokerlife #suitup #hardrockhotel #episode1

Dunst is an ambassador to one of the biggest online poker rooms, partypoker. He also advertised Zyngapoker.

Being banned from Australia

During his college years, Dunst traveled to study one semester abroad in Australia. However, he didn’t pay attention to the details and ended up overstaying his student visa. This resulted in a 3-year ban from setting foot in the continent-nation. Once that ban expired, he put his time in Australia to good use as he has cashed in Aussie Millions events multiple times for huge sums of money.