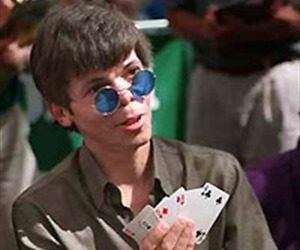 Stu “The Kid” Ungar is considered the best No Limit Hold’em (and Gin Rummy) player that has ever lived down to pure natural raw talent and “card sense”.

He won a total of 5 WSOP gold bracelets, placed first in a total of 10 poker tournaments with a buy-in of $5k or higher. He only ever entered 30 major tournaments. This record still has not been broken, when it comes to pure percentages.

Many wonder how he would have fared in today’s poker era, but he did not live to see the day as his drug addiction and general degeneracy got the better of him. He passed away in 1998.

In his lifetime Stu had won the World Series of Poker and the Super Bowl of Poker three times each and was introduced to the Poker Hall of Fame in 2001 posthumously, three years after his death.

Stuart Errol Ungar was born on 8th September, 1953 and raised in Manhattan’s Lower East Side. His father owned a bar where he operated as a bookmaker and loan shark. Stu helped out, that’s how he got introduced to a lot of “wise guys” and gamblers. His father tried to keep him away from gambling as he had seen the impact it had on some of his customers. But as soon as Stu could he started playing in underground Gin Rummy games. He had an incredible feel for numbers. So much so that he skipped 7th grade in school, only to drop out early in 10th grade to play Gin Rummy full time.

After his father died and his mom suffered a stroke, Ungar kept gambling to earn money to care for his mother. He got protected by a lot of figures from the world of organized crime.

By 1976 he was regarded as one of the best Gin players around. This caused his Gin action to dry up as nobody wanted to play against him anymore. Thus he started taking up poker professionally instead.

In 1977 Ungar moved to Las Vegas. He was a gambler through and through and soon got banned from almost all Vegas casinos for card-counting at Black Jack. Apparently, he was once bet $100k by Bob Stupak to count the cards down to the last card of a 6-deck shoe. He won the bet.

Ungar was considered a high roller by the age of 26 in 1979. This was the year his mother died. Some poker players had already introduced him to cocaine so he could play longer hours, but the death of his mother turned the drug into a vehicle for escapism. It became an addiction, a very public addiction.

He managed to win the 1980 World Series Of Poker Main Event despite it all. Doyle Brunson said it was the only time he could watch a player improve as the tournament went on. And “the Kid”,  a nickname he earned for his boyish face a small stature, then pulled off a back-to-back win in 1981. However, all this went to his head and the downward spiral continued. He was a true gambler with a constant need for action and high risk. His big leak, besides cocaine, was horse racing. 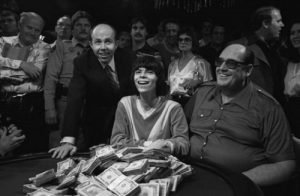 His 1982 marriage to Madeline and the birth of his daughter Stefanie could not stop his self-destructive route.

He was known for his temper at the poker tables, insulting other players and the dealers. His cocaine consumption had caused his nose to collapse and he started wearing his trademark round sunglasses slid down in an attempt to disguise it. He went to get his nose fixed but couldn’t hold off the cocaine long enough for the wounds to heal after the surgery so it all got ruined once more.

In 1990 he failed to show up to Day 3 of the WSOP Main Event and was found in his hotel room, passed out after a seizure. He survived, but did not make it back to the tables. As he had amassed a massive chip stack in the days before, he managed to blind down into the money, coming 9th, cashing for $20,050.

In order to prove to the poker world that he is still the best, Ungar challenged 1990 WSOP Main Event champion Mansour Maltoubi to a series of $50,000 NLHE freezeout heads-up matches.

In one of these games, Ungar played one of the most memorable hands in poker history. He called his opponent’s all-in bet on the river with nothing but 10 high – and he turned out to be correct, as Maltoubi was bluffing with 5-4 for a busted gutshot straight draw… At that point, Maltoubi quit, granting Ungar the victory.

Despite all his success, his financial situation got so bad he could not buy his daughter school clothes – eventually, Mike Sexton gave him a $300 JCPenny card. Ungar was so ashamed that he vowed to tidy himself up. He still only managed to stay clean for two weeks at a time.

16 years after his last WSOP Main Event win, in 1997, he was found back at the tables of the WSOP. Billy Baxter had staked him the last minute, telling him if he saw him away from his chair he was going to kill him.

Ungar carried a picture of his daughter Stefanie in his shirt pocket close to his heart and went on to win the event, earning him the name “The Comeback Kid” and $1 million, that he split 50/50 with Baxter. In the ESPN winner interview, he said “There’s nobody that ever beat me playing cards. The only one that ever beat me was myself.”

However, shortly after collecting $500K for his 3rd Main Event championship, he lost it all again on drugs and sports betting.

He really wanted to defend his title at the WSOP in 1998, but when the day came he was in such bad shape that he decided himself it was less embarrassing not to show up at all.

Allegedly, he was seen in the following months in Vegas, asking for money in poker rooms. He said it was to rebuild his bankroll, but instead he spent it on crack. As his nose was in such a bad state that he couldn’t snort cocaine anymore, he had moved on to a drug he could smoke instead.

He was arrested for possession of crack cocaine and his daughter told him she did not want any contact anymore until he had tidied himself up.

He was found dead at the age of 45 in a sleazy hotel room on 22nd November 1998 with $800 in his pocket. The cause of death was heart failure. It did not look like he was on drugs when he died, but years of abuse had taken their toll on his body.

Doyle Brunson was quoted: “Everybody felt terrible, but it wasn’t a surprise.”