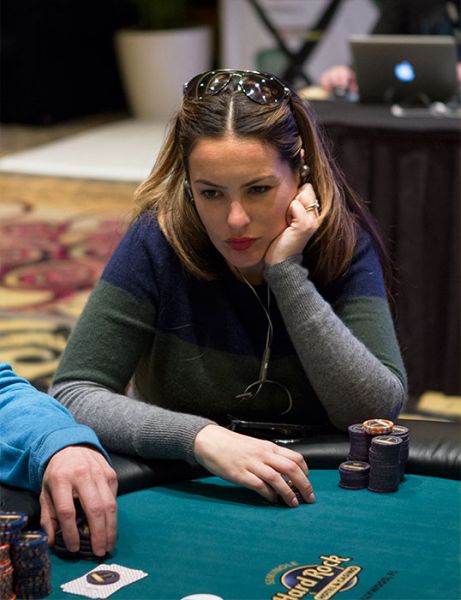 Sasha Barrese is an American actress and poker player. She was born on April 24th, 1981 in Maui, Hawaii. As an actress, she’s best known for her role as Tracy Garner-Billings in the comedy trilogy Hangover I-III.

As for poker, she honed her skills in typical Hollywood home games before she decided to take a shot at becoming a professional player. She plays live cash games and tournaments mainly in Los Angeles and Las Vegas.

Barrese has just under $120,00 in live tournament earnings. She has multiple ITM finishes from WSOP and WPT events.

Her net worth is estimated to be around $4 million.

Barrese was born to a mother of Russian descent in Maui, HI – she later cited her Russian heritage as the reason for her love for card games. Her mother had ambitions of becoming an actress. Barrese played a role in the 1989 comedy Homer and Eddie at the age of 8.

After graduating from high school, she started working as a model. She also continued getting gigs as an actress. Her big break came in 2008, with her appearance in the smash hit comedy The Hangover – later, two sequels were made for this blockbuster hit.

As for poker, much akin to WPT commentator and actor Vincent Van Patten, Barrese started out in private Hollywood cash games. As she pointed it out in a 2014 piece on pokerlisting.com, the cast and crew of The Hangover movie were very eager to play poker in between shoots.

The director of the movie, Todd Phillips – who later went on to receive an Oscar nomination for Best Director for the 2019 movie Joker – was an especially keen recreational player. Phillips has over $280K in live tournament cashes, including three ITM finishes from the World Series of Poker. According to Barrese, his game of choice is PLO cash games.

Barrese also told the website that she plans to try her luck as a “bona fide” poker professional – relying solely on her poker winnings as income. She came to this realization after noticing she tends to win more than her fair share in the private cash games against her Holywood friends. So she decided to hit up her local poker rooms, both the cash games and tournaments, and started grinding up her bankroll.

She made this declaration in 2014. Since her cash game results aren’t tracked, nor are her tournament losses, only her cashes, we can’t say for certain if she succeeded. One thing is her certain: impressively, she was able to deliver sizable live tourney scores from 2014 up to 2017, then slowed down after.

Barrese’s Hendon page shows $119,945 in live tournament cashes. She’s accumulated that sum by making it into the money in 31 different events over the course of 7 years.

The first recorded cash on her page is from February 2012. She came in 2nd in the $450 No Limit Hold’em – Big Bounty event at the Deep Stack Extravaganza in The Palazzo Las Vegas for $6,023. She lost the heads-up battle for the first place to American poker pro Eric Baldwin.

The first time she delivered a 6-figure score was in April 2014. She finished 22nd out of a field of 1,795 in the $3,500 NLHE tournament at the WPT Seminole Hard Rock Showdown in Hollywood, FL. She won $25,372, which is the biggest single live tournament score of her career to date.

Sasha Barrese is yet to win her first WSOP gold bracelet.

Barrese has cashed in the $1,500 Millionaire Maker twice in back-to-back years: in 2014 and 2015. The “Milly Maker” is the World Series’ famous tournament which guarantees at least $1 million first prize money every year – hence its name. Usually, this event draws massive fields that rival the Main Event.

Barrese often played in private cash games in Hollywood. She also stated in her profile piece for pokerlistings.com that she is planning to play live cash in casinos as well, not just tournaments, to build her bankroll as a professional player.

However, none of her cash results are public. She hasn’t appeared in any TV show or online live stream where they broadcast live cash games.

There’s no account on any poker site known to be affiliated with Barrese.

As we wrote earlier, her first role was in the comedy Homer and Eddie at the age of 8. She’s been specializing in comedic movies ever since.

In 1999, she appeared in a minor role in the comedy classic American Pie. She was also featured in the 2001 comedy Legally Blonde, starring Reese Witherspoon.

Her biggest role was also in a comedy blockbuster, The Hangover. She played Tracy Garner-Billings, the bride of one of the main characters, Doug, who disappears after his bachelor’s party in the casino capital of the world, Las Vegas. Barrese’s character is also the sister of the stand-out comedic character of the franchise, Alan, played by Zach Galifianakis.


Warner Bros. went on to produce two sequels to the Hangover movie, making it a rare trilogy of comedies. Barrese appeared in both the 2011 and 2013 sequel – however, she hasn’t landed a movie role since.

After the release of her last feature film, Barrese decided to make poker the focus of her professional career.