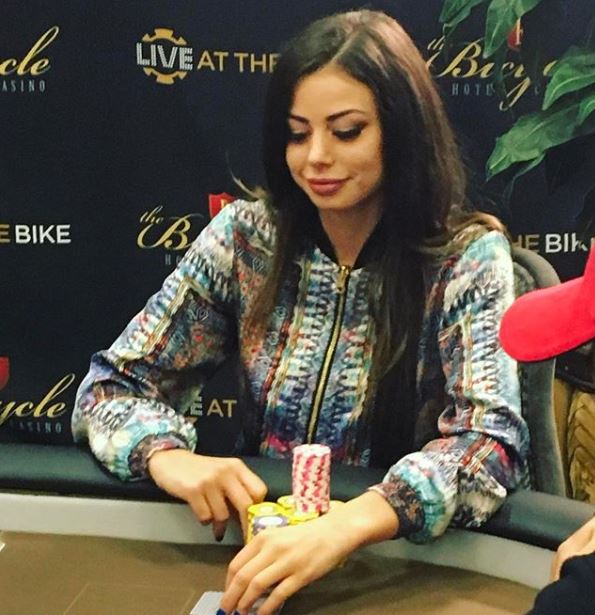 Samantha Abernathy is an American graphic designer and poker player. She was born on May 11th, 1991 in Atlanta, Georgia.

She’s best known for her deep run at the 2016 Aussie Millions Main Event, as well as for regularly appearing on the TV show Poker Night in America where she mostly played $25/$50 NLHE cash games. In addition, she has $600K in live tournament earnings. Online, she plays under the screen name “SamanthaA” on WSOP.com.

In March 2016, she won a $10K prop bet against Dan Bilzerian after successfully biking from Las Vegas to Los Angeles within 72 hours.

Abernathy studied design at the College of Art and Design in Savannah, Georgia. She worked as a graphic designer after graduation. She continues getting gigs as a freelancer even after she started to play poker regularly.

As a child, Abernathy played all kinds of card and board games, such as Rummy, Clue, and Monopoly.

According to her mother, who spoke to cardplayer.com for a profile piece on her daughter, the young Sam Abernathy would play – and win money – on prop bets from a very young age. Some of the examples of her bets are: solving a Rubik’s cube in time, or doing a backflip on a difficult surface.

As for poker, she found her love for the game while visiting the Seminole Hard Rock Casino in Florida for fun around 2013. Here’s how Abernathy recalled that memory for her article:

“I somehow registered for a tournament, somehow managed to not completely embarrass myself, all the while falling in love with the idea of pursuing a career in poker, without having a clue about what I was getting myself into.

A week later, I went to Prague to play some World Poker Tour events. It seemed like a whimsical play at the time, and when I got back to the States I decided to move to Las Vegas and take it seriously.”

She kept delivering cashes from low to mid stakes Hold’em tournaments throughout the rest of 2014. The first time she got a score for over $10K was in February 2015, when she finished 2nd in the $250 NLHE event at the Deep Stack Extravaganza at The Venetian for $25,053.

It was also at the 2016 Aussie Millions where Abernathy first really captured the attention of the poker media. She ran deep in the A$10,000 Main Event, eventually busting in 3rd place for no less than $437,543. In that tournament, famed poker player and commentator Tony Dunst finished 2nd, and Canadian poker pro Alan “Ari” Engel finished first.

The Aussie Millions Poker Championship has kicked off! Satellites are running all day, every day from now until Jan 28th. Jump online, win a satty, and see you guys in Melbourne for the main event? Who’s going? Can’t wait! 🙌🏼 @crownresorts #AussieMillions

This is the biggest single live tournament score of Abernathy’s career to date.

Abernathy is yet to win her first WSOP gold bracelet.

Overall, she cashed in 7 World Series events for a combined $32,888 in total.

Almost all of her ITM finishes are from small buy-in, large-field events. In the $1,500 No Limit Hold’em Shootout event in 2015, she finished 15th out of 1,000 players for $5,413. “Shootout” is a rare tournament type in which every table plays out like a “mini-tournament”. The winner of each table gets to advance to the next round, where new tables are drawn from the previous round’s winners.

Abernathy is a regular on Poker Night in America, a TV show airing on the American sports channel CBS Sports. She’s appeared in a total of 25 episodes between 2015 and 2018. PNIA mostly features $25/$50 No Limit Hold’em cash game sessions.

In the all-female “Ladies Night” episode, Abernathy ended the session with a massive, $24,000 (480 BB’s) profit playing against, among others, Cate Hall, Kelly Minkin, and Lexy Gavin.

She also played on the show in 2016, when her line-up of opponents included 2015 WSOP Main Event champion Joe McKeehen, Mike Dentale, and Andrew Micali.

In that session, she ran a memorable bluff against Dentale.

Abernathy plays under the screen name “SamanthaA” on WSOP.com Nevada. According to the online MTT database PocketFives, she has cashed for $18,884 so far.

Getting slowrolled at the Aussie Millions Main Event

Habb got dealt pocket Kings – yet he acted as if he wanted to just call and “misclicked” to 3-bet his hand. Abernathy fell right into the trap and re-shoved with pocket 6’s.

Then, to make matters worse, Habb acted as if he was put to a tough decision with the second best starting hand in Hold’em. After a bit of Hollywood, he evidently called.

Luckily, the “poker gods” have served some justice this time and Abernathy got her set of 6’s on the river to send the nasty slowroller to the rail.

In March 2016, Instagram superstar and self-proclaimed poker millionaire Dan Bilzerian bet Sam Abernathy she couldn’t bike from Las Vegas to Los Angeles within 72 hours. Abernathy, who was a keen betting girl from a very young age, took on the challenge. She was friendly with Bilzerian and Bill Perkins even before the ambitious prop bet was made.

The distance to be covered was a cool 270 miles (434 km’s). Impressively, Abernathy was able to complete the challenge in time on March 13th. She celebrated with the Twitter video below.