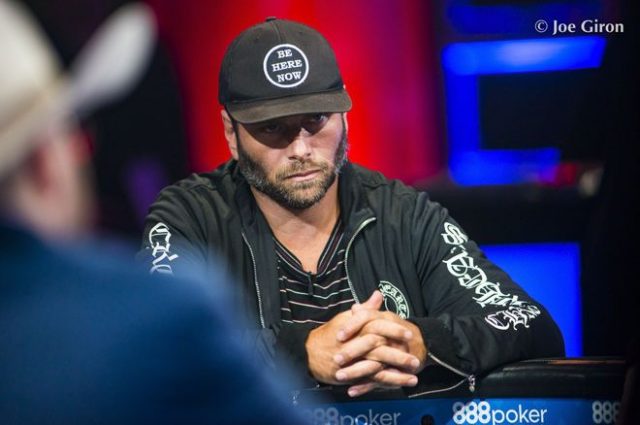 However, what he’s best known for has nothing to do with poker: a sex tape he made with celebrity Paris Hilton leaked into the internet, making national news. He’s also been married to three other famous women – Elizabeth Daily, Shannon Doherty and Pamela Anderson.

Salomon was born into a very rich family – his father was the executive vice president of one of the biggest movie studios in the world, Warner Bros. So getting a bankroll was never an issue for him.

Many sites claim that before his fame, he owned an online gambling site – however, none of them are able to name which site it was. He’s also credited as an executive producer to a 2002 movie “American Girl” on IMDB.

He got national attention after his sex tape with Paris Hilton leaked in 2003.

In the mid-2000’s, he also started getting notable live tournament scores. In 2006, he cashed in the WSOP Main Event.

According to the Hendon Mob, Rick Salomon has $9.906 million in career earnings in live tournaments. That actually places him in the top 100 on the all time money list. His profile shows just 13 individual cashes, which means he’s mostly been playing high buy-in events.

Salomon has cashed in the WSOP only four times – however, it’s for a combined whopping $5.69 million.

His first World Series cash is from the 2006 Main Event. He made a deep run, eventually finishing 196th place out of a field of 8,773 players for $42,882. That was the year the record for the biggest prize pool for the Main Event was broken. Jamie Gold ended up winning the $12 million first prize, which is a record unbroken to this day.

In 2014, he finished 4th in the $1,000,000 Big One for One Drop high roller. That is an impressive feat, given the fact that that high buy-in draws the greatest poker players from around the world. At the final table, he had to face the likes of Daniel Negreanu, Christoph Vogelsand and the eventual winner Dan Colman. Salomon’s 4th place in that field got him a $2.8 million payday.

Even more impressively, when the WSOP decided to put on another $1 million One Drop event in 2018 after 4 years of hiatus, Salomon took 4th place again! That year, only 27 bought in for the event, so only 5 places paid yet Salomon made it in the money – he won $2.84 million this time. His final table opponents were just as impressive again – Fedor Holz, Dan Smith, and Justin Bonomo who was going on one of the greatest heaters in poker history at the time.

Salomon regularly plays in the notorious super high stakes private cash games in Las Vegas. Results from those games are evidently not public – however, during his highly publicized divorce with Pamela Anderson some interesting numbers were revealed.

Anderson’s lawyers claimed in court that Salomon won $40 million against American banker and businessman Andy Beal in a cash game held at the Bellagio in 2014.

In 2017, Salomon appeared on Poker Central’s revived version of Poker After Dark. He was playing a televised session of $300/$600 No Limit Hold’em.

That night, he got in a huge, almost $1 million pot against Aaron Zang. He ended up winning it with a straight over Zang’s set of 8’s.

Salomon is known for his relationships with famous women. He’s been married 4 times.

In 2001, Salomon and his then-girlfriend Paris Hilton made a sex tape. Later, Hilton claimed that it was never intended to be public, and was meant to be seen by just the two of them. However, in 2003, the tape got leaked online. It became national news in the US, as Hilton, a well-known reality TV star, was on the tape.

An adult video company, Kahatani Ltd. started distributing the tape for which they got sued for $30 million by Hilton.

Since the spread of the tape couldn’t be contained, Salomon decided to profit from it himself. In April 2004, he made a deal with another adult film company, Red Light District Video, to distribute his private sex tape. Salomon is credited as director, producer and the star of the video titled “1 Night in Paris”.

Hilton sued him too – the former couple ended up settling the case. Salomon paid Hilton $400,000 plus a percentage of the profits from the video.

While playing a NLHE cash game on PokerGO’s stream, Salomon claimed that once Doug Polk had called the police on him. Polk responded to the allegation in a video on his YouTube channel.

Polk recalls the events as such: he got word of a $1,000/$2,000 cash game going on in The Venetian. When he got there, he saw Salomon and an unnamed player playing heads-up. When Polk asked if he could join, they said no.

Polk in turn, being frustrated with the trouble he went through to get to the game, insisted on playing. Salomon and the other player started to verbally abuse Polk and then left. The same night, Salomon’s friend he was playing with, got arrested for drug possession.

Salomon alleges that Polk was the one who called the police out of spite. However, Polk denies he did that.