Online Poker, Rest of the World
December 1, 2020 by Janette Dee

Possibly almost halfway through, the heads-up challenge between poker superstars Doug Polk and Daniel Negreanu has been an exciting treat for the whole poker community this past couple of weeks. So far, the two have been battling it out in a series of sessions playing two-tables of heads up No Limit Hold’em online on the WSOP.com client to complete an agreed total of 12,500 or 25,000 hands. At the stakes of $200/$400, the automatic 100 big blind chip stack top-up has both players swinging six-figure amounts from their bankrolls.

While underdog Negreanu drew first blood in their live session at the PokerGO studio in Las Vegas, it seems that the last couple of sessions has been brutal for the Poker Hall of Famer. The lead has been shifting back and forth between the two with no clear dominating winner, up until the last four sessions where Polk successfully scooped up a landslide of wins. Turning the challenge around, Polk recorded a profit of over $775k from sessions 9-12 putting the semi-retired pro back in the green and now in the lead for $578,417. 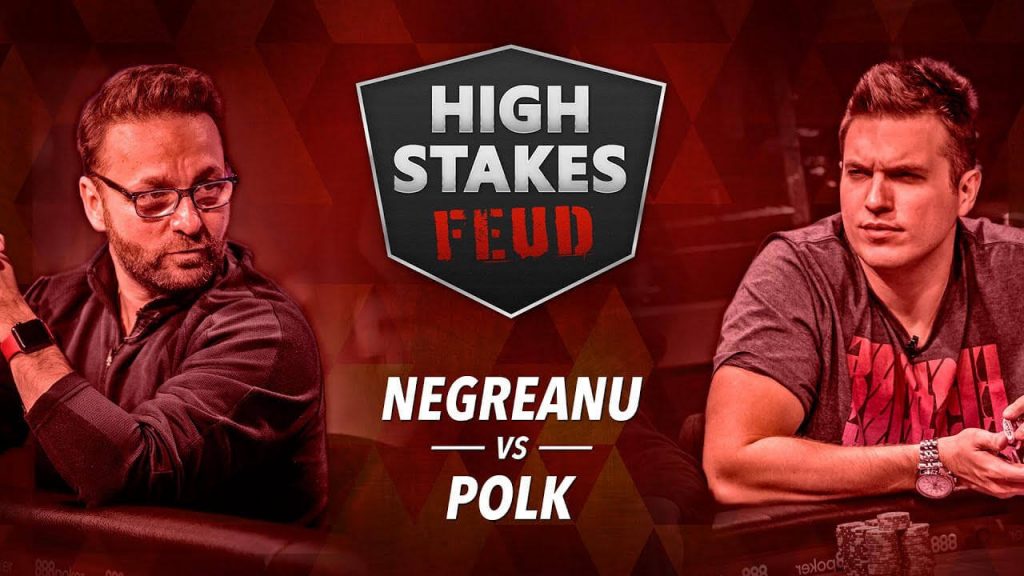 Another two hour session ended with Negreanu adding a small profit to his already standing lead of $155k. While his win may be less than a buy-in, Negreanu landed some pretty good hands with especially his quad Aces more than halfway through the session where he received a nice double-up from Polk. Having led out a chunky bet on the river when the flush hit, Polk raised his King-high flush for value and was immediately crushed when it came to showdown, awarding Negreanu the $93k pot.

After the session, it was interesting to hear some comments from the players themselves with Polk tweeting, “Dnegs is playing a preflop strategy so insane that it has to be one of two things: 1) He has found the holy grail of preflop solutions unknown to any top hunl players on the planet, 2) He’s playing bad. I’d say time will tell but maybe it already is”

The least big blinds ive ever lost JJ vs AK when a king hits pic.twitter.com/aUCpj2Sj8p

Negreanu likewise commented on another three-bet pot and his flopped straight for third nuts with a redraw for a flush saying:

Won $23k in today’s session and will be going over it tonight. One tilting hand:

With Negreanu in the lead for close to $180k, Polk started the session with an amusing tweet for his poker fans depicting a sad picture of himself heading downhill. To his surprise, things were about to turn around for the heads up pro in the next couple of sessions. The ninth session of the challenge ended with a total of 3,799 hands completed and Polk taking a minor lead after profiting over $205k across the 377 hands.

Back at it today at 2:30pm PT pic.twitter.com/NrYv85qrMc

Polk’s excitement with how things are going is clearly evident in his tweet saying, “Back in the green. Had some pretty nice cooler spots back the opposite way. Feel like im playing great.”

Negreanu on the other hand, seemed grateful for the bigger picture this challenge has brought to the poker community despite the substantial loss. Polk replied with a similar enthusiasm, especially given the current circumstance with the pandemic and the overall lack of live poker action happening.

This has been great. Especially in time with so much less going on, having something exciting like this has been amazing for poker.

Everyone has an opinion. Especially Bill Perkins. https://t.co/m2s8exCcik

The longest session so far, the two poker icons battled it out for over four hours only to end with Polk bagging yet another six-figure win to his now $143,996 lead. Unlike the previous session where Polk apparently ran hot from beginning to end, round 10 initially saw Negreanu in a small lead for the first couple of hours. It was about halfway through the session when Polk began dominating the match, putting a ton of pressure on his opponent with his check-raises and huge bets.

This was our longest session we have played yet I think. Lots of big pots back and forth. Some coolers, some bluffs, this one had it all. (Except all ins before the river?)

“Back to having a few buyin lead, hopefully this time around we dont lose 12 buyins and get back in the cellar.”, Upswing Poker founder Polk added.

One of the biggest pots of the heads up challenge came up about an hour in and amounted to $110k in the middle. After a three-bet from Negreanu and a call in position from Polk, a flop of Kh-2h-2s was revealed with the GGpoker ambassador firing a small continuation bet of about one-fourth pot. Polk called to see a turn of Ac with Negreanu this time firing a 75% pot bet as to which Polk continues to call. The 4h completed the board and an overbet shove from Negreanu for Polk’s remaining $40k stack unfortunately met a call from Polk who rivered a Queen-high flush against Negreanu’s two pairs of fours and deuces.

Ran the J4cc vs Q6hh hand where @RealKidPoker ran it yesterday. Turn was def a punt. River actually not that bad if he arrives with enough of the right hands. Not as bad a hand as you might initially think.

Celebrating Thanksgiving for their 11th session, Polk has a lot to be thankful for after smashing the last three sessions with upwards of $100k in winnings continuously. After 416 hands, Polk extended his lead to a total of $264,019.75 over 5,067 hands completed. This session was no different than the previous ones with Polk continuing to dominate the match while making the most out of his good run of cards. With his overbets and check-raises pulling through at the right time, it seems that Negreanu might have a lot of catching up to do with a possible huge downswing coming right at him.

I don’t know how I only lost 3 buy ins in today’s session but I’m thankful for it!

Will be back at it again Saturday at 2:30pm PST.

“Very quiet day. We didnt even play an all in pot. Lot of small-mid pots going our way to take a 6.5 buyin lead.”, Polk commented.

Recording his most profitable session to date, Polk scooped up another huge win of $332k putting his lead now to over half a million dollars. Unfortunately for Negreanu, things did not quite change yet with a couple bad run outs leaving him with not much choice but to give Polk a nice double up.

The session’s biggest pot of $108k saw Negreanu making the nut straight on the turn with Ace-King only to be rivered by a backdoor flush with Polk’s 6s-4s. In addition to his impressive run, Polk remains at the top of his game making a great hero call with Ace-Jack high against King-Queen for another $81k pot.

“Monster session today. Hit everything. Every hero call went right. Every big bluff got through. Every runout gave me the nuts. Every all in went my way. This was the kind of session you dream about.”, Doug later on tweeted.

Familiar with the massive swings in poker, Negreanu carried on to celebrate a well-played session despite the crushing outcome. While many were quick to criticize Negreanu’s game, Polk tweeted in support of his opponent, commenting on his improvement regardless of the recorded loss.

Tonight I’m going to celebrate a well played session with a bottle of the good stuff.

Incredibly happy with how I played which is all you can control.

Lots of work to do to get even but these swings were expected absolutely. pic.twitter.com/Sv7WEpi86Y

Also he did make some improvements in the last session. Don’t completely write him off cause he went on a big downswing.

Also next time I lose 250k lets not overreact the other way lol.

The most recent session finally sees Negreanu bagging a win, albeit a small one. Breaking Polk’s god-run of six-figure scores, Negreanu recorded a profit of $17,780 across 476 hands. This puts the total hands completed to 6,227 hands, about halfway through if the challenge is set to end on the completion of 12,500 hands.

Cruising through the session, Negreanu was on his way to booking a $120k win when Polk turned things around in the last half hour, successfully cutting a chunk of his losses. Remaining optimistic, Negreanu tweeted “A win is a win.. ” while patiently waiting for the match to swing in his direction.

A win is a win but this freaking guy is WORLD CLASS at folding preflop when I have Aces! I have video evidence we are now at exactly 10 straight times where he has either open folded, folded bb, or folded t a 3 bet.

It was looking like we were gonna lose 2 or 3 buyins then we hit an extremely nice top pair to win a 3 buyin pot to close out the session. Daniel is playing much better imo, lots of new moves.

“Made a couple poor plays in some big pots today. Hopefully can play better next session.”

“Poker is so humbling. You can play great several sessions in a row then get a couple tough spots and be super inaccurate. Just gotta keep doing your best to improve.”, Polk further noted.

With 13 sessions and a total of 6,227 hands completed, Polk stands in the lead for a massive profit of $578,417.57 after bagging over $775k in winnings from sessions 9-12. Play will continue streaming on the DougPolkPoker and GGPokertv Youtube channels for interested viewers.

Interestingly, Polk made a proposition to stream a session showing occasional hole cards if his post gets 25k retweets. So far, his number is up to 5.2k with possibly more to come adding more fire to the already exciting challenge.