Chinese settlers were the first to bring card games to New Zealand, and while Australia banned many forms of gambling in the 1800s, gamblers traveled to New Zealand to wager as they wished.

The game of poker has been around the island as long as it has been existent in the United States. Word has it that the Americans, who arrived more than a hundred years ago, are the source of poker knowledge when they brought the game with them during their search for gold in the Pacific region. That being the case, new variants of the game like Texas Hold’em was easy enough for the Kiwis to learn and to develop a passion for.

Currently, Lee Nelson tops the New Zealand all time money list on Hendon with $2.542 million in lifetime winnings. In January 2006, he won the A$10,300 Main Event at the Crown Australian Poker Championships in Melbourne, Australia for A$1.295 million. That is the biggest single live tournament cash of his career to date.

Second on that list is Sosia Jiang. He has cashed for $1.482 million in live tournaments during his career. His biggest score is $498,073, which he got for taking down the HK$103,000 NLHE High Roller at the PokerStars Championship in Macau. He also made it into the money in the 2019 WSOP Main Event.

As for online poker, a player who plays under the screen name “rickwaa” on PokerStars from New Zealand has cashed for over $1.8 million in online MTT’s.

Gambling in New Zealand is governed by the Department of Internal Affairs. And as much as they are liberal in their regulations, operators are not allowed to promote gambling to the citizens, unless it is the authorized lotteries conducted in the country.

The Department of Internal Affairs maintains strict guidelines for the four allowed classes of gambling.

Besides casino gaming, people are allowed to bet on Horse Races, Lotteries and “Pokies” (slot machines). A large portion of profits generated by these activities is supposed to be returned to the community.

Although poker can be found in all the casinos, it is being offered more regularly and consistently in Christchurch Casino and Skycity Auckland.

There are a total of six casinos in the country – Christchurch Casino, Skycity Auckland, Dunedin Casino, Skycity Hamilton, Skycity Queenstown, Skycity Wharf Casino. However, the most notable of the six would be the first two casinos on the list. Players need to be over 20 years old to be allowed to enter the gaming area of the facilities.

The biggest local poker tournament in New Zealand is the New Zealand Poker Championship (NZPC) and has a buy-in of NZ$1,650 with a field of around 80 players.

One of the most charming Kiwi Casinos. Located in the Southern Cross Hotel, Dunedin Casino offers Hold’em, Omaha, and Caribbean Stud poker games. 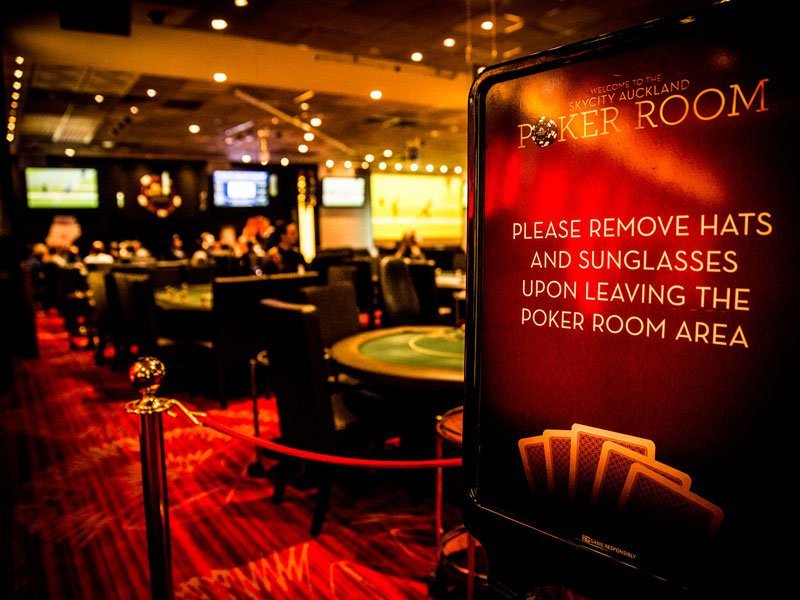 Located at the base of the most recognizable landmark of the kiwi capital, the SkyTower, the Skycity Auckland Casino is the 2nd casino in New Zealand.

Gambling through any communication device is illegal in New Zealand, i.e. online gambling and online poker. But New Zealand’s Gambling Act 2003 only prohibits online gambling from operators based in New Zealand. It is, therefore, not illegal for anyone to play in online sites that are based offshore. However, although it is not illegal to play in offshore casino operators or poker sites, it is considered an offense in New Zealand for these offshore sites to blatantly advertise and promote gaming in the country. Gambling Amendment No.2 in 2007 reinforced the 2003 law and brought additional accountability to owners and gambling operators to ensure that operators are part of a clean well-run sector.

It should be noted that as long as poker is not regarded as a main source of income, Kiwi poker players do not have to pay taxes on their winnings.

In this article, we offer a list of the advantages and disadvantages of each online Poker Room currently accessible to New Zealand players in 2023.