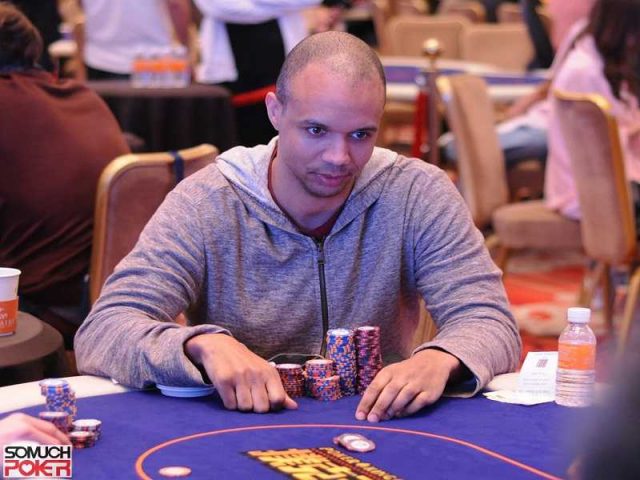 Born February 1st, 1977 in California and moving soon after to Roselle, New Jersey, Phil Ivey is an American poker player who now lives in Las Vegas.

Ivey has also appeared on classic poker TV shows such as Poker After Dark on NBC or High Stakes Poker on The Game Show Network regularly.

As the WSOP record holder for most mixed-game bracelets, he’s been called, variously, “No Home Jerome,” “The Phenom,” and “The Tiger Woods of Poker.” He’s known for successfully throwing his opponents off their game by staring directly into their eyes.

Ivey began playing poker when he was only eight years old. His grandfather taught him how to play 5-Card Stud with a small wager on the game, usually no more than five cents. As a teenager, he created a fake ID to get into the casinos in Atlantic City. This earned him his first nickname: No Home Jerome.

In the late 90s, Ivey played against his co-workers at the telemarketing firm where he worked. When he went pro at age 20, Negreanu and Greenstein considered him to be a fish because they thought he played too many hands and too loose. Nevertheless, they are now all close friends.

As the 11th most winning poker player in tournaments, Ivey has accumulated over $30.3 million in live tournament winnings over the course of his long career.

His public appearances were few between 2016 and 2018 when his legal disputes over edge sorting were reaching their conclusion. Other than a short appearance at the WSOP in 2016, he was barely visible that year.

However, good news came in October 2017, when Phil Ivey announced during an interview with Somuchpoker in Beijing that he would soon be back in the game.

For over 15 years, Ivey has been winning some of planet’s biggest poker games.

He’s a regular in Bobby’s Room (recently renamed Legends Room) at the Bellagio in Las Vegas, often participating in the $4,000/$8,000 mixed cash games (typically referred to as the Big Game).

In addition, he was a critical player with “the Corporation” a team of high stakes professionals who joined forces (bankrolls) to take on Andy Beal, a math genius and American billionaire banker, at a series of heads-up Limit Hold’em cash games for enormous sums of money. When the Corporation was down $10M to Beal in February 2006, Ivey stepped up his game, winning $16.6M from the Texan over three days during a heads-up match at the Wynn Resort. The stakes were $25,000/$50,000 and $50,000/$100,000. This was a sweet revenge after Beal had beaten The Corporation out of $13M earlier that month.

Ivey also appeared on the two classic poker TV shows Poker After Dark on NBC and High Stakes Poker on The Game Show Network, where he played $200/$400 and $300/$600 NLHE cash games, respectively.

According to rumors, Ivey’s taken some significant sums of cash from Chinese businessmen who he’s been playing against in high stakes cash games in Macau since 2010. He spent late 2015 and early 2016 playing some big cash games in Manila.

He also appeared in some of the super high stakes livestreamed cash games put on by Triton Poker.

In June 2021, he took down the $25,000 WPT Heads-Up Championship event for $400,000 on the Asian real money poker app PokerKing. On his way to victor, Ivey eliminated  Manig Loeser, Anthony Zinno, Stephen Chidwick, and Christopher Krukv from the tournament. In his final match-up, he beat Finnish poker legend Patrik Antonius for the title.

Until April 2011, Ivey received $920,000 per month for his collaboration with Full Tilt Poker, where he was a member of the original design team. After Black Friday, he filed a lawsuit against Tiltware LLC, the company that operates Full Tilt Poker, in order to help recover funds lost by US players due to the company’s actions. He even sat out the 2011 WSOP in recognition of the players who lost money because of Full Tilt. When the company reopened, he began playing under the username Polarizing.

After playing Punto Banco (similar to Baccarat) for 2 nights at the Mayfair Club, Crockfords Casino in London and winning $12M, Ivey ended up suing the casino for not paying him.

The casino responded by saying that they refused to pay him and because he  and his playing partner, Cheung Yin “Kelly” Sun used a trick to win, called “edge sorting”. Ivey even admitted to doing so, claiming that he asked the dealer to rotate the cards 180 degrees in order to exploit asymmetrical pattern differences on the cards; but he argued it was the casino’s fault that he could do that since they used flawed cards and rotated them according to his request

. Although he lost the court case, he appealed to the court with the highest jurisdiction in the country, the UK supreme court, who stated in late 2017 that Ivey’s actions were indeed  considered as cheating.

In 2014, Atlantic City’s Borgata Hotel Casino & Spa already filed a $9.6M lawsuit against Ivey over cheating (edge-sorting again), claiming that he exploited playing cards’ manufacturing flaws over four sessions in 2012. Borgata went on to win the case and a US court ordered Ivey to repay a total of over $10M. The casino sought to seize these funds in New Jersey but found nothing of value. They subsequently applied to seize assets in Nevada in early 2019 and their request was approved. Few assets were found in Nevada either and so, during the 2019 WSOP, Borgata’s lawyers took things further.

Phil Ivey was leading the $50K Poker Player’s Championship overnight, but the following day he lost his chips very quickly and busted in 8th place. It transpired that during his final day of play, Borgata had been able to gain approval to seize from WSOP any prize money Ivey won, along with any potential bracelet before they ever reached his hands. His $124,410 prize was confiscated, and his future attendance at the WSOP was thrown into question.

In July 2020, Ivey at long last settled his grueling legal case against Borgata.

Having met his wife when he was 17, Ivey married his high school sweetheart, Luciaetta, at the Little White Wedding Chapel on Las Vegas Boulevard in Las Vegas on May 19, 2002. They moved to Las Vegas in 2004, where she started to play micro stakes poker. Ivey used to joke that he would return home after losing hundreds of thousands of dollars only to find himself consoling his wife for losing seventy-five cents.

After being married for seven years, Phil and Luciaetta Ivey filed a joint petition for divorce. David Chesnoff, a high-profile divorce attorney and, reportedly, also a great poker player in his free time, represented Ivey, and the divorce was granted on December 29, 2009.

Although his ex-wife Luciaetta received $180,000 per month in alimony from her husband’s Tiltware payments, she claimed the settlement was not fair because “Phil enjoyed the remaining approximately $740,000,” and she tried repeatedly to open the case. Nevertheless, the case remains closed.

Now going by the name of Luciaetta Rich and living in in a 3722 square feet mansion (345sqm) in Tampa Bay, Florida, she seems to have moved beyond requiring the assistance of Ivey’s alimony payments.

Currently, Ivey is enjoying a long-term relationship with his girlfriend Nellie Garcia, an IFBB (International Federation of Body Building and Fitness) bikini participant and Crossfit competitor since 2012. The couple has been together since 2013, but the public didn’t find out until Garcia posted photos on Instagram while at Phil’s house in Cabo, Mexico. The photos showed the couple visiting with some kids at an elementary school in Vosloorus, South Africa, where they’d been distributing school supplies. Later, she joined him at events in Macau, Las Vegas, and London.

Ivey has founded two companies, both based on poker. The first is Ivey Poker. This is a “play for free” poker app that was established in 2012 to allow users to compete against pros like Ivey. The second is Ivey League, which is a poker training site founded in 2014, which shut down in 2017.

Additionally, Phil Ivey was asked to make a cameo appearance in a commercial for the 2015 Chrysler 300. He also released a poker course for the premier online education platform  Masterclass in 2019.

In September 2019, an interesting story emerged when Daniel Cates and Illya Trincher filed a legal objection to Borgata’s seizure of Ivey’s WSOP Poker Player’s Championship winnings. They claimed that they had a staking deal, which involved  paying 100% of Ivey’s buy in, and as such, a significant portion of his winnings belonged to them. The only realistic reason Phil Ivey would sell 100% of his action is that he has run out of money.

According to celebritynetworth.com, he is worth $100M but these recent developments suggest this figure could in fact be $0.

Phil is also friends with some EDM artists, such as Steve Aoki.

In addition, Ivey is an active philanthropist, giving money to many charitable causes. For instance, he donated $50,000 to Empowered 2 Excel in March 2008. This organization focuses on supporting and providing opportunities for underprivileged children. He also worked with his mother to found the Budding Ivey Foundation to honor his deceased grandfather, Leonard “Bud” Simmons, who taught him to play poker as a child. Bud always told his grandson that every person, just one person, can make a difference, and through the organization, Ivey is proving his grandfather’s words to be true today.

The link to the charity poker tournament we're sponsoring today in Phoenix is in my bio. Starts at 3:30 pm