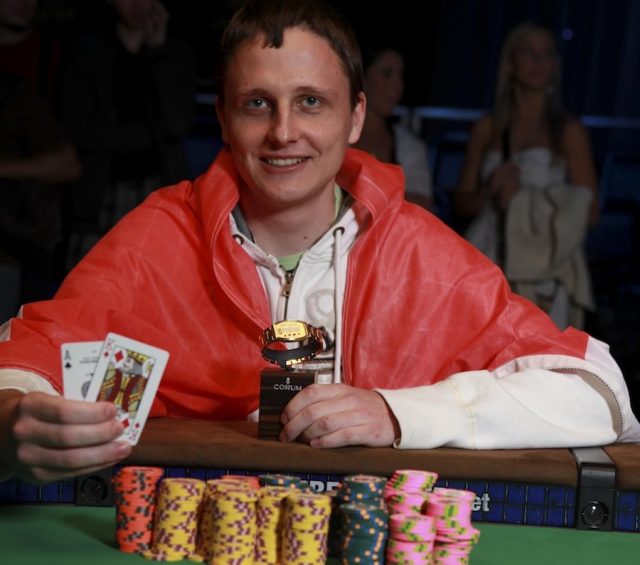 Peter Traply is a Hungarian professional poker player. He was born on March 27th, 1987 in Budapest, Hungary.

He’s better known as his online poker moniker “Belabacsi”. Under that screen name, he’s racked up millions and millions in online MTT winnings on PokerStars. When he decided to make his results public in June 2019 on the online poker tournament database PocketFives, he immediately jumped on top of the all-time money list. He was overtaken by Niklas “lena900” Astedt in January of next year, 2020.

Traply has amassed a staggering $17.7 million in online poker tournament winnings as of date.

Traply was just 18 when he decided to take poker seriously.

He stumbled upon a poker broadcast on a Hungarian sports channel – that was a novelty in his country at that time. The commentator was an old Hungarian pop singer and recreational poker player – his oddly enthusiastic commentary on this new, exciting card game made an impression in the Hungarian mainstream pop culture at the time.

Traply was one of the people who got hooked on poker. He had played some draw poker for fun with his friends before, but he just discovered No Limit Hold’em. He was eager to learn the strategy behind it, so he took to the online forums.

While studying in college, he started grinding freeroll tournaments on poker sites, his favorite being the late Bugsy’s Room. Thus he was able to build his bankroll from literally $0.

He continued to play freerolls while also picking up micro stakes cash games. He started moving up in stakes at the cash tables – however, he wasn’t able to do that in MTT’s. What changed his game was getting a strategy book by Dan Harrington, which also directed him to English language international poker forums on the internet, where he could talk strategy more.

Eventually, he made it to the highest level in both online tournaments and cash and so he was able to make a good living from playing poker even before he graduated college.

Traply’s Hendon page shows $946,427 in lifetime winnings. He’s amassed that sum by cashing in just 28 different tournaments over the course of 12 years.

Traply has won one WSOP gold bracelet so far.

“Shootout” is a rare tournament type in which every table plays out like a “mini-tournament”. The winner of each table gets to advance to the next round, where new tables are drawn from the previous round’s winners.

Traply won one of these events at the 2009 World Series. He beat American poker pro Andrew Lichtenberger heads-up for the title.

Overall, Traply has cashed in 9 World Series events for $443,926 combined.

When it comes to live poker, Traply has exclusively focused on tournaments during his career so far, staying away from live cash games. That is not the case for online poker.

He has never appeared on any poker TV show or live stream to play live cash publicly.

Traply is one of the most successful MTT players in online poker history.

He currently sits on the #2 spot in PocketFives’ all time money list with $17.7 million in career earnings, around $2.5 million behind Sweden’s Niklas “lena900” Astedt.

As we wrote in our intro, he started as a freeroll grinder in 2005. His PokerStars screen name, “Belabacsi” translates to “Mr. Bela” from his native language, Hungarian. Béla is a common Hungarian first name which Peter Traply picked because he thought it sounded silly.

He used to use the same alias on Full Tilt; while on partypoker, he plays under the screen name “HungarysHero”.

At the start of his career, Belabacsi focused on online cash games besides freerolls. He got to NL$2/$4 on his favorite site, the late Bugsy’s Room, in his first year of playing. Those were the highest stakes tables in the room with consistent action.

However, Traply is best known for his outstanding online MTT results.

A year before, in May 2009, he took down an even bigger SCOOP tournament. He finished first in the $2,100 NLHE event for $312,360. That is the biggest single online tournament score of his career to date.

It’s a bit harsh to call this a “scandal”, but this story certainly highlighted a controversial issue in online poker.

For years, Chris Moorman was celebrated as the biggest online MTT winner of all time in the international poker media. Articles were published to celebrate his milestones, such as cashing for $10 million combined, then for $15 million combined.

However, in June 2019, Traply decided to make his results public on the online poker tournament database PocketFives – users there can decide to make their MTT scores visible to others or not.

When “Belabacsi” Traply released his scoresheet, he immediately jumped on top of the all time money list with $16.7 million in career earnings. It turned out he’d always been ahead of Chris Moorman.

To make things more complicated, fellow Hungarian online poker crusher, Andras “probirs” Nemeth made his P5 results public for a brief period of time in October 2019. He had outerned even Traply with $17.1 million in winnings at the time. Nemeth chose to hide his scores again after a few days, and thus Traply remained number 1 on the site.

In January 2020, Niklas “lena900” Astedt took the top spot. However, now the question lingers among online poker fans: is it possible the real biggest crusher of all time is still “hiding” out there?