Rest of the World
October 6, 2020 by Christin Maschmann

In this column, we deliver you the latest and most interesting news and gossip from our favourite poker people.

The first stop of a new poker tour kicked off last week in the Chicagoland area and it looks like it might have been the last as well. Though the $1,100 buy-in Main Event of the Midway Poker Tour had a normal beginning over two start flights, it all ended in a disaster.

The event was partially a charity event and the 31 players that returned for Day 2 were guaranteed $2,300. They were not aware of the fact, however, that according to Charitable Gaming Acts and regulations (230 ILCS30) the organizer was only allowed to pay out $1,600 in cash and that it had been decided to pay out the remainder in “precious metals”.

Apparently, not even the tournament director had been aware of this and did not return back to work on Day 2. And also the organizer Dan Bekavac, who could have maybe saved some drama on site, had not been seen in 24 hours.

Players from Illinois were more or less aware of this loophole to comply with the law, but people from other states were shocked. Especially on finding out the silver and gold that they received did not actually carry the advertised value and they were basically being stiffed by 30%.

After a lot of chaos, anger and confusion players eventually decided to play it out and deal with the issue later. Midway Poker Tour owner/founder Dan Bekavac issued a statement on social media:

“We were informed on Saturday that we could not have a gold buyer on property to buy gold prizes, I suggested paying the $1,600 maximum ‘cash’ payout and give a certificate to pick up gold the next day at a coin dealer. If players were from out of town have it shipped to them securely the next day.

This isn’t the option that was chosen. It was decided that silver would be purchased by a supplier at $35 per ounce or $11 overvalue per ounce. This was not my decision. Players are still being paid out. Just not as much as expected due to overpaying for precious metals.

[…] Again, there was absolutely nothing I could have done differently, and would like to personally apologize to the players that were affected by the payout differences.”

So, basically, it will be difficult to figure out who’s fault this tournament disaster was, but it does not look good for Midway Poker Tour to successfully continue their events. 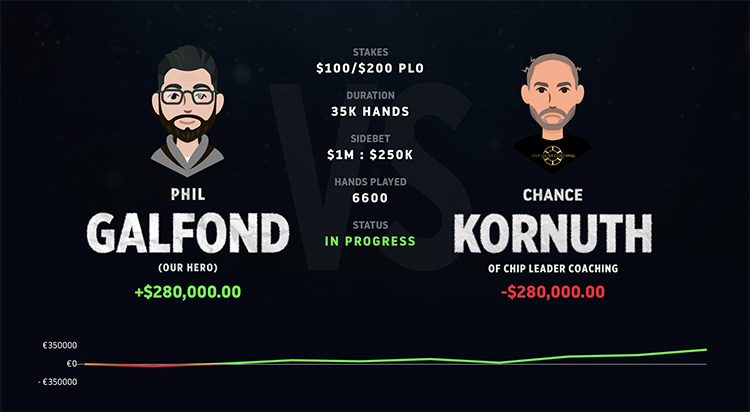 Amidst running a poker site, being a husband and dad, trying to get the right data to prove Mike Postle is guilty, Phil Galfond keeps grinding the heads-up matches as part of the Galfond Challenge.

While the status of the challenge against Bill Perkins is still set on “In Progress” at only 862 of the planned 50k hands played, Galfond is well into the battle with Chance Kornuth.

The first session of this confrontation, playing $100/$200 Pot-Limt Omaha, ended in favour of Chance Kornuth (+$33.5k), Galfond gained the lead after this and Kornuth could not get even so far. On the contrary.

The latest session was recently played out and came to an early halt as Chance was down $103k after just 250 hands. This had depleted his funds on WSOP.com and the match needed to be continued some other time.

This result puts Galfond ahead with $280k after 6,600 hands. The players will fight for a total of 35k hands, however, so anything is still possible for Kornuth.

The challenge will continue once Kornuth can increase his deposit limit on WSOP.com and the two players have planned to play five sessions per week.

There are no official live streams on Twitch, but you can find highlight videos of each day on the Run It Once YouTube channel:

The Galfond Challenge isn’t the only heads-up action that can be found currently. More players have decided recently to battle it out one-on-one on the real or virtual felt.

Antonio Esfandiari and Phil Hellmuth are friends off the table and although seeing them play against each other at the poker table is usually quite fun, it remains to be a serious affair for sure.

The first installment of PokerGo’s High Stakes Duel was set in July. Players put up $50k per person and battled it out in the PokerGo studios. Hellmuth did win this one and Estfandiari immediately requested a rematch.

This was now played out and released on 23rd September, this time for $100k per person. And what do you know, Hellmuth won again! You can watch the whole match on PokerGo’s YouTube:

Antonio Esfandiari immediately re-challenged Hellmuth for a double-or-nothing, planning to play a Round 3 for $400k in the next couple of weeks!

We will close this heads-up topic with the most controversial one out there right now. Daniel Negreanu and Doug Polk are planning to end their year-long feud with a $200/$400 heads-up no-limit hold’em online challenge on 1st November.

It took a while to agree on the details, but it is finally (sort of) set. Here are the rules for the upcoming match:

A few things still need to be ironed out, like the streaming platform etc, but it looks like we are ready to go and the poker world has something to anticipate for November. It will surely come with some good old poker drama.

Charlie and the Poker Dream Factory

Charlie started with a $109 ticket and worked her way up the different satellites all the way to the $102k-buy-in high roller, suddenly facing the poker elite in a prestigious online battle. And not just that.

She managed to get to the final table with players like Linus Loeliger, Isaac Haxton, Daniel Dvoress, Christoph Vogelsang, Sergi Reixach and Michael Addamo, fading an unfortunate bubble and finishing in third place for a $620.000 payout.

It is definitely one of the best poker stories of the year and we can only congratulate the likeable and talented Charlie to her success.

Now that Isai Scheinberg has been trialled, the discussions around his Poker Hall of Fame induction are running hot once more. So far the reason to not put Scheinberg on the list had been the legal dispute he was in. But he is obviously not the only option.

The Poker Hall of Fame was established in 1979 and serves to honour players as well as crucial contributors who have helped grow the game of poker. Currently there are 58 people in the Hall of Fame and one or two are being added each year.

The announcement of the new inductees usually aligns with the WSOP Final Table. Due to Covid restrictions this has been delayed this year and we are eagerly awaiting a decision.