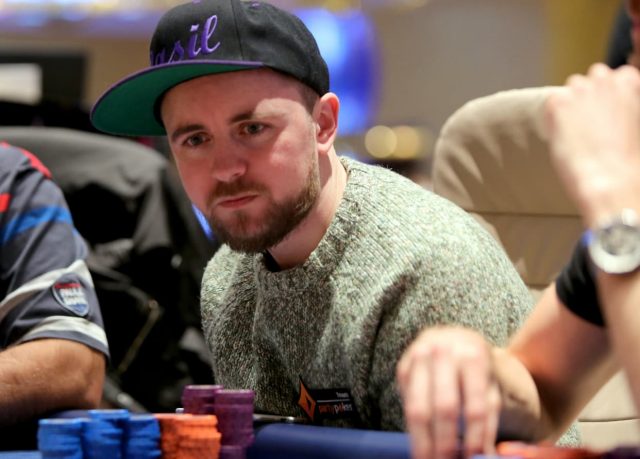 Patrick Leonard is a British professional poker player. He was born in 1989 in Newcastle upon Tyne, England.

He is one of the biggest online MTT crushers out there. He’s collected over $13.1 million in online tournament cashes. In the early 2010’s, he also started to play live events around the world regularly. In the live scene, he’s amassed $2.5 million in career winnings so far. In July 2017, he won 3 major live tournaments for $835,000 combined within 4 days.

In 2020, when all major poker tournaments were forced to be played online due to the Coronavirus pandemic, he took 2nd place in a $25K WSOP Circuit event on GGPoker for $1.611 million – that is an outstanding amount for an online score. In April 2021, he managed to take down two SCOOP titles in 2 days on PokerStars.

Leonard co-founded the bitB Staking staking group. He is also a long-time ambassador to partypoker.

The young Leonard’s career at the poker table didn’t start out the most promising way. Here’s how he recanted the earliest stage of his poker journey in an interview with a website called habwin.com in April 2016:

“I remember very vividly playing as a 16-year-old in a kitchen trying to fit into a social circle, they wanted to play cards, I wasn’t really interested.

I remember my very first hand very clearly. I had KQ and called down three streets on 876 5 5 because I assumed my cards were good. The hustlers that they were made me feel like it was a cooler. I didn’t do so well at the start! I’m a very competitive person, I hate losing, and as I wasn’t winning in the games it made me become obsessed with poker.

I studied, joined forums, reached out to successful players and over time became one of the more successful players in the home games. This showed me from the earliest moment in my career that hard work trumps all and it’s been what I’ve prided myself on throughout my career. I’m not the smartest guy in poker, I’m not naturally made to be a poker player, but I will work harder than the other guys.”

And all that hard work studying poker strategy eventually paid off for Leonard who became an extremely successful pro. However, before making poker his profession, he studied journalism in college and even spent a brief time in the finance industry.

The first few online scores on his tally are from 2009, but he hasn’t started cashing in online tournaments on a regular basis until 2011.

Leonard has cashed for $2.590 million in live tournaments during his career, according to his Hendon profile. He’s amassed that sum by getting into the money in 50 different events over the course of 9 years.

Leonard is yet to win his first WSOP gold bracelet.

The first recorded score on his PocketFives profile is a 12th place finish for $159 in a $33 NLHE tourney on Stars. He has another cash from 2009 – then, there’s a 2-year hiatus in results for Pads. The next money finish for him came in April 2011.

However, he really got going that year, delivering score after score in the PokerStars tourneys. The first time he made an online cash for over $10K was in September 2012. He finished 3rd in the $530 Sunday 500 event and won a life-changing $50,778.

Since then, Leonard has collected many, many more impressive online tournament results. Here are just a few.

However, the best was still yet to come for Leonard. In 2020, all major poker tournaments had to be played online due to the dreaded Coronavirus pandemic. In May of that year, Leonard played a $25,000 buy-in WSOP Circuit event on GG, under the screen name “babu$hka”. He eventually busted in 2nd place for a whopping $1.611 million! He lost the heads-up battle for the title to an unknown player playing under the cryptic screen name “800-522-4700”.

In April 2021, he won 2 SCOOP (Spring Championship of Online Poker) titles in just two days on PokerStars. He first took down the $1,050 NLHE Afternoon Deepstack event for $60,953; then finished first in the $5,200 NLHE PKO Sunday High Roller event for $258,007 the next day. Those were his 4th and 5th SCOOP titles in his illustrious career.

Leonard became a Team partypoker pro in April 2016. He’s been one of the most prominent ambassadors of the site ever since.

In the same year, he co-founded the staking group bitB Staking. A staking group looks for profitable poker players to back, pays for their buy-ins in exchange for a share (usually half) of their profits, and also provides poker strategy coaching to them.

His angle shooting incident at the PSC Barcelona Main Event

In 2017, in the €5,300 Main Event at the PokerStars Championship Barcelona, Leonard got into a hand that piqued the interest of many in the online poker community – and not for the right reasons.

Luigi Andrea Shehadeh bet big on the river against Leonard. “Pads”, after a bit of talking and tanking, said “you’ve got it, nice hand”, clearly indicating that he had decided to fold. However, he did not fold – none of these phrases are binding at a poker table, unlike saying “I fold” or “fold”.

It seems Leonard said those things to trick his opponent into thinking he already folded, so that he’d give an honest reaction or even turn his cards over. Many in the online poker community thought that this was angle shooting on Leonard’s part, and not an okay thing to do at the table.

Leonard released a video response on bitB Staking’s YouTube channel, claiming he decided to talk during that hand to make the show more interesting for the viewers, since he felt that the hand-for-hand part on the bubble was boring to watch. Also, he said he didn’t try to trick Shehadeh into exposing his hand, just wanted to get a read on him to see what’s he like when he’s strong, using “speech play”.