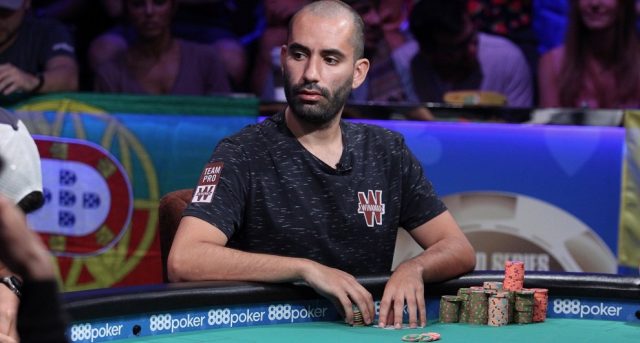 Joao Vieira is a Portuguese professional poker player and former professional basketball player. He was born on July 27th, 1989 on the island of Madeira in Portugal.

Vieira plays under the screen name “naza114” on PokerStars, “MisterN411” on partypoker, and “Joao Vieira” on Natural8-GGNetwork. In April 2021, he overtook Sweden’s Niklas “lena900” Astedt on the top of PocketFives’ all time biggest online MMT winners list. Vieira has cashed for a whopping $23.533 million in online tournaments, as of the time of writing this. He has won 5 WCOOP (World Championship of Online Poker) titles on PokerStars.

As for live poker, he cashed for $3.811 million in tournaments. He tops the Portuguese all time money list on Hendon. He has a WSOP gold bracelet as well.

Vieira talked about the early part of his life, including his transition from pro basketball to pro poker, in a 2019 episode of the Poker Stories Podcast by Cardplayer Media.

As a child, the young Joao Vieira excelled in basketball. So much so that he became a professional basketball player as a teenager and played in the top division in Portugal. He represented his country in the youth national team.

However, he got burnt out on the court early. By the time he was just 21, he decided to give up his career in pro ball, not being satisfied with what he had achieved so far. He also found another passion: poker.

His teammates introduced him to the card game. They were playing both live and online, and so did Vieira after a while.

When he quit pro basketball, he went back to college to study business. However, he was also making some money through online poker, so he knew that was a potential career path too. He started regularly cashing in MTT’s on Stars in 2009. A few years later, he became a high stakes pro.

Joao Vieira has $3.811 million in live tournament cashes, according to his Hendon page. That sum is the product of ITM finishes in 117 different live events over the course of 12 years. He tops the Portuguese all time money list on Hendon.

The first recorded cash on his profile is from April 2008. He finished 15th in a €110 No Limit Hold’em tourney at the Estoril Poker Open Championship in Portugal for €347.

He spent the next few years delivering cashes from mid to high stakes live tournaments in Europe, while also grinding online. The first time Vieira made a live score for over $100K was at the 2014 PokerStars Caribbean Adventure in the Bahamas. He came in 8th in the $25,500 NLHE High Roller event for $157,940.

Joao Vieira has won one WSOP gold bracelet so far.

In 2020, when the coronavirus pandemic forced all World Series events to be played online, Vieira cashed in a total of 16 events – after all, online tournament play is his forte. Out of the 16, the biggest score was $82,510. He got that for finishing 5th in the $1,500 FIFTY STACK No Limit Hold’em event on Natural8-GGNetwork.

Overall, Vieira has cashed in 51 World Series events for a total of $1.215 million combined.

In the podcast interview linked above, Vieira explains why he prefers tournaments over cash games. He likes that the schedule keeps him diligent; and his competitive nature (he’s a former pro athlete after all) also likes the fact that there’s an objective ranking at the end.

He also mentions that the only reason he plays cash games to practice his mixed game skills.

Therefore, it’s no surprise that he hasn’t appeared on any TV shows or live streams where he plays live cash in front of cameras.

Vieira is the biggest online tournament winner in poker history.

He collected a whopping $23.533 million in MTT winnings during his career. He overtook the Swedish Niklas “lena900” Astedt on the top of PocketFives’ all time leaderboard in April 2021.

Vieira plays under the screen names “naza114” on PokerStars, “Joao Vieira” on GGPoker, and “MisterN411” on partypoker. He collected the most money on his PokerStars account, $11.933 million.

Vieira went on to collect many millions and 5 WCOOP (World Championship of Online Poker) titles on Stars. His first two WCOOP victories came in 2018, then the next three in 2019. We’ve also mentioned his WSOP Online cashes on Natural8-GGNetwork in the summer of 2020 previously.

In April 2021, he took down the $25,000 SCOOP (Spring Championship of Online Poker) NLHE 8-Max Super High Roller. He pocketed no less than $469,987. Not only is this his biggest online tournament score to date, but it was also the one that put him over the edge to become the biggest online MTT winner of all time.

→As a Pro Basketball Player ←

Despite his 5’9 height, Vieira managed to sign a professional contract with a Portuguese basketball team as a teenager.

He played as a point guard for CAB Madeira in Portugal’s first division. He quit his career on the court after the 2009-2010 season, at just age 21. Thankfully, his new career, poker, worked out very well for him.