Legends of Poker
September 3, 2019 by Marton 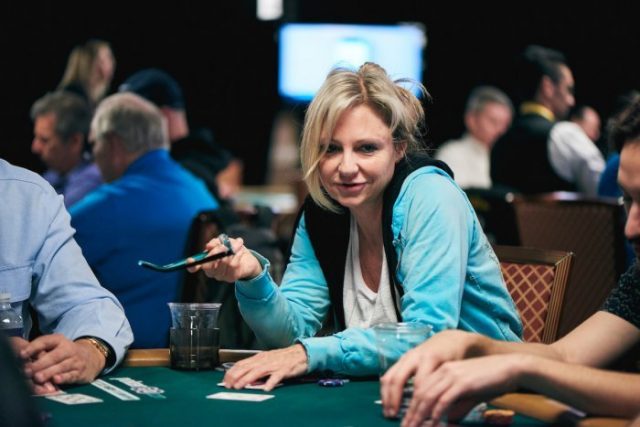 Jennifer Harman is an American professional poker player. She was born on November 29th, 1964 in Reno, Nevada.

She’s one of the 4 women in poker history to have won at least 2 open – meaning discounting the female-only Ladies Events – WSOP bracelets. She was inducted into the Poker Hall of Fame in 2015.

Harman was featured regularly on NBC’s classic poker TV show Poker After Dark. Also, she likes to play the highest stakes live cash games in the world in the Bellagio’s famous Bobby’s Room.

Unfortunately, her career was somewhat hindered by her serious health problems – she had two kidney transplants.

According to an exclusive interview she gave to our site somuchpoker.com, Harman started playing poker in live casinos before she reached the legal gambling age, at 16. She recalls she sneaked in casinos in Las Vegas to play. Given the fact that her home state is Nevada, the gambling capital of the world, it’s not surprising that poker has been a part of her life from early on.

Harman earned a bachelor’s degree in biology from the University of Nevada. However, she chose not to pursue a career in that field, rather to play poker for a living.

Jennifer Harman’s Hendon page shows $2.765 million in live tournament earnings. That respectable sum is a product of results from the past 25 years – 89 individual ITM finishes over the course of a quarter of a century.

Jennifer Harman is one of 4 female players to have won at least 2 WSOP events, discounting the gender segregated Ladies Events. The other three are Vanessa Selbst (with 3 bracelets), Kristen Bicknell (3 bracelets, 1 from the Ladies Event), and Loni Harwood (2 bracelets).

Harman won her first bracelet in the $5,000 No Limit 2-to-7 Draw event in 2000 for $146,250. According to the poker legend, it was her first time playing that game and she had only received a 5-minute lesson on it from infamous Full Tilt boss Howard Lederer right before the tournament.

She confirmed the legend in our interview, saying:

“I won the bracelet when I didn’t know the game  [2-7 Triple Draw] beforehand. Howard basically gave me a sheet to study, with what hands to play in what positions. But No Limit Deuce is a draw game, so you don’t see any cards; it’s basically a feel game. You feel your opponent, and when you know how to play—you know the hands and the positions and know a little bit about the game—it becomes a feel game, and I’m good at that. And you need a little luck too! A little luck always helps to win a tournament!”

Starting day 2 with this guy at my table. What do you think? Should I beat his tushi? @wsop #NLdeuce pic.twitter.com/9lvTjLjyZy

Jennifer Harman was part of one of the most legendary stories in poker history. It was “The Corporation” taking on billionaire banker Andy Beal in heads-up cash games with stakes as high as $100,000/$200,000 blinds!

In 2001, the founder of Beal Bank, Andy Beal, came by the Bellagio to play some high stakes Limit Hold’em. The pros in the room quickly noticed the new amateur willing to wager huge amounts of cash and tried to befriend him. Eventually, Todd Brunson was able to get Beal to play him heads-up, but lost around $100,000.

News of the upset spread among the sharks of Vegas, who tried everything to keep their new fish on a winning streak at the cash tables of the Bellagio. Andy Beal, however, had another idea.

Fearing collusion, he proposed he plays every pro in a heads-up match. That is when “The Corporation” was created.

The Corporation was a line-up 16 professional poker players. It included, among others, Doyle Brunson and his son Todd, Phil Ivey, Gus Hansen, and the hero of our story, Jennifer Harman. The 16 pros pooled together $10 million to take on their challenger in a series of heads-up Limit Hold’em cash game matches.

For a long time, Andy Beal was in the lead. At some point, The Corporation even completely busted their $10 million bankroll.

However, they managed to come back. The poker pros pooled another bankroll and demanded a re-match.

Phil Ivey was the one doing most of the heavylifting for his team. However, Jennifer Harman did her part too. Eventually, The Corporation won back the initially lost $10 million and earned an additional $6.5 million to go with it.

That was the end of Andy Beal’s crazy run against the poker pros. Shortly after, Beal announced he wasn’t planning on playing poker again.

Jennifer Harman takes part in less unique cash games as well. She regularly plays in the world’s most famous high stakes cash game room, Bobby’s Room at the Bellagio. She usually plays on stakes ranging from “just” $200/$400 all the way up to $1,500/$3,000.

She also appeared on some of the classic poker TV shows, such as NBC’s Poker After Dark or The Game Show Network’s High Stakes Poker.

There, she battled some of the best known pros of the game in high stakes cash games in front of the cameras.

Harman played on the now defunct poker site Full Tilt under the screen name “Jennifer Harman”. She mostly played the mixed game H.O.R.S.E. at high stakes cash tables. However, according to data available online, she is down $97,000 in a 6,200-hand sample.

It is tradition for ESPN Magazine to feature top athletes naked once a year in their Body Issue. Harman and her three friends took part in this tradition – they’re pictured sitting around a poker table with cards and chips in front of them, nude.