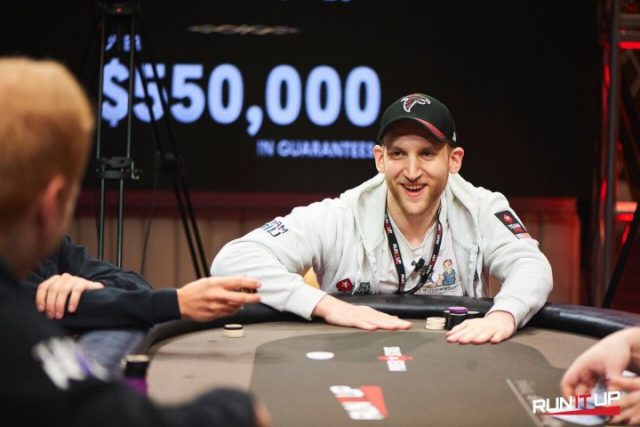 Jason Somerville is an American professional poker player and Twitch streamer. He was born on April 15th, 1987 on Long Island, New York.

Somerville streams on Twitch on the Run It UP account, the account for an online poker content company he founded, with around 230,000 followers. That makes him one of the biggest poker streamers on the platform. He plays under the screen name “jcarverpoker” on PokerStars, playing both tournaments and cash games.

Somerville is the only well-known high stake poker pro who is openly gay.

Somerville described his first encounter with poker at the age of 17 as such on his now offline website:

“I came home one day from my karate teaching job to discover my Dad watching a poker game on TV (turns out, it’s the WPT).  I was immediately intrigued, like most of us probably were back then upon first exposure. It was all so foreign, yet so…exciting.  I watched Howard Lederer take down the tournament with style and composure and was hooked on the spot. At the end of the episode, pretty awestruck, I knew I had to give this game a try.  I had never gambled before poker and had very little clue where to start.”

He began playing home games with his friends, studying strategy materials online, and playing freerolls on Pacific Poker. That way he built up a bankroll of $500 that he put to use in $0.50/$1 cash games and low stakes S&G’s.

By the time he turned 21, he was already a professional player and able to regularly play WSOP events.

Jason Somerville’s Hendon page shows a total of $3.639 million in career earnings. He has 71 cashes.

Somerville’s biggest live cash to date is from June 2014. He played in a $100,000 buy-in Super High Roller at the Bellagio. As expected, such an event saw some of the biggest names in poker among the entrants – Dan Smith, Doug Polk, and more. Somerville still managed to come in 4th in a star-studded, 66-player field and won an impressive $1,327,352.

Jason Somerville has won one WSOP gold bracelet during his career so far.

Somerville was very close to another bracelet two years before. He lost heads-up to Jeff Carris in the 2009 NLHE Shootout Championship. His second place got him $194,004. A shootout tournament is when the winners of each table progress to the next stage – they’re quite uncommon.

In April 2018, Somerville appeared on Stones Gambling Hall’s live stream of a $5/$10/$20 No Limit Hold’em cash game. However, he didn’t play, he just took the role of the commentator along with another famous poker streamer, the Dutch Lex Veldhuis.

As for Somerville actually playing live cash, he was featured in a live cash game session specifically for famous Twitch streamers on Poker Night in America. The event took place in July 2015, and the blinds were $25/$50.

“Jcarverpoker” is Somerville’s screen name on PokerStars. According to him, he chose that alias because of a character named Jack Carver in a video game called Far Cry.

On that account, he has $346,000 in online MTT cashes. The earliest recorded ones are from March 2015 – however, he admits he used to have another PS account, Taknapotin, that is now closed. The results on that account aren’t tracked. Neither are his results on Pacific Poker, the online poker room he started in.

Anyhow, the first cash on his PocketFives profile is a modest $60 for a 97th place finish in an $11 tourney. About a week later, he cashed for $30,745 after coming in 5th in a $1,050 event on Stars. That is actually his biggest single online tournament score on record to date.

However, he usually plays low to mid stakes. That means that we don’t have a large sample on him on the online cash game database, since that only tracks $25/$50 and higher.

Somerville only has 2,500 high stakes cash game hands tracked on his “jcarver” account on PokerStars – he’s down $3,718 in that sample.

Somerville was signed to be an UltimatePoker team member in 2013. That poker site is no longer in operation – however, it’s not to be confused with Ultimate Bet, another late poker site. Ultimate Poker went bankrupt in late 2014.

Somerville was signed to become a Team PokerStars Pro in February 2015. He’s still a member to this day.

His original Twitch account, jcarverpoker, was created in October 2014. It currently sits at 2,200 followers. However, by now he’s abandoned that channel and moved to Run It UP.

our seventh @runitupreno is officially underway!

Run It UP was founded in May 2015 by Jason Somerville. It streams other content, not just Somerville playing poker – you can find streams of past major poker events on the account as well. That Twitch channel has 232,000 followers as of the time of writing this article, which makes it one of the biggest poker channels on the site.

Run It UP also has a YouTube channel with 40,1000 subscribers. Their videos usually get tens of thousands of views on one upload.

Prior to his eminent Twitch career, Somerville was making poker strategy videos on the now defunct site PokerTV.