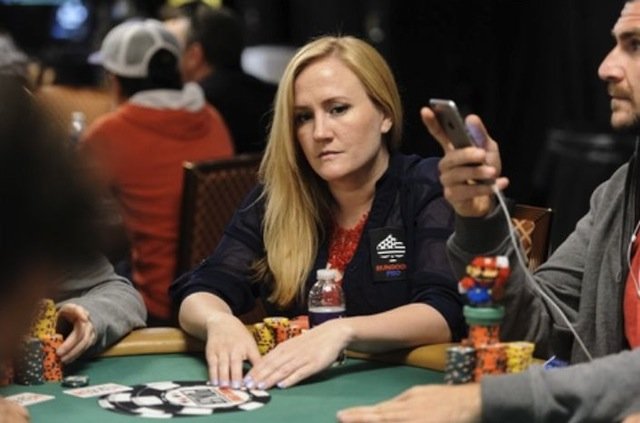 Jamie Kerstetter is an American professional poker player and poker commentator. She was born in 1983 in Monroe Township, New Jersey.

Online, she plays under the screen name “andthelawwon” on PokerStars and “JamieKerstetter” on partypoker. She has almost $800,000 in online MTT winnings.

She’s also a prominent poker media personality, She’s done commentary for the WSOP Main Event and World Poker Tour event coverages as well. Also, she’s hosted the CBS Sports show Poker Night in America (where she also appeared as a player) and Run It Once Poker’s podcast The Rake.

In 2020, she made a bit of a stir in the online poker community after claiming Daniel Negreanu tried to hinder her career as a broadcaster.

Kerstetter did an interview for Run It Once Poker’s “Hero’s Journey” series. In it, she talked about how as a child, she was a big sports fan. She especially enjoyed playing soccer and running track.

She graduated from Rutgers University with a double major in English and Psychology. Then, she went on to earn a law degree from the University of Michigan and got a job as a tax attorney – but she despised that job.

However, she didn’t quit to pursue poker like many pros did early in their careers. Rather, she was fired along with the other new associates in the firm. While working as a lawyer, Kerstetter started playing live cash games for recreation. Without her job, that was her only stream of income so she started playing more, buying into tournaments as well.

After a while, she did get another job as an attorney. However, she realized that she enjoyed making money as a poker player much more. So, after a year, she quit and went back to the tables.

Kerstetter has $694,286 in live tournament earnings, according to her Hendon page. That sum is the product of ITM finishes in 159 different live events over the course of 12 years.

The first recorded result on her page is from March 2009. She came in 47th in a $500 No Limit Hold’em tourney at the Foxwoods Poker Classic in Ledyard, CT for $907. She also made her first 5-figure live cash in 2009. In July of that year, she finished 8th in the $2,150 NLHE championship event at the Summer Showdown at the Mohegan Sun in Uncasville, CT. She bagged a $20,685 score.

In June 2012, she took down the $600 Omaha Hi-Lo event at the Deep Stack Extravaganza III at The Palazzo Las Vegas for $26,530. Later that year, in September 2012, Kerstetter finished 12th in the $3,500 No Limit Hold’em – Championship (Re-Entry) event at the WPT Borgata Poker Open in Atlantic City for $44,937. That is her biggest single live tournament score to date.

Jamie Kerstetter is yet to win her first WSOP gold bracelet.

Overall, Kerstetter has cashed in 44 World Series events for a total of $214,116 combined.

As we wrote earlier, Kerstetter started off as a recreational live cash player while practicing law in New Jersey. According to herself, she was beating $5/$10 NLHE in Atlantic City even as an amateur. After she lost her job, live cash poker became her only source of income.

She’s appeared on 22 episodes of Poker Night in America, a poker show airing on CBS Sports, between 2015 and 2018. She appeared as a host and as a player as well.

In season 5, aired in 2017, she played in an all-female “Ladies Night” line-up at the Seminole Hard Rock Casino in Hollywood, FL. The game was $25/$50 No Limit Hold’em, and her opponents included fellow former attorneys Kelly Minkin and Cate Hall, as well as Sam Abernathy.

In October 2020, she was featured on PokerGO’s “Friday Night Poker”. She played a session of $5/$10 NLHE with a $10 big blind ante against, among others, all time live tournament money leader Brynn Kenney and film producer Lauren Roberts.

Kerstetter plays under the screen names “andthelawwon” on PokerStars, “JamieKerstetter” on partypoker, and “and the law won” on the now defunct poker site Full Tilt. Across those accounts, she amassed over $785,000 in online MTT cashes.

Her first recorded online score is from June 2007. However, there’s a two-year gap between her first and second cash. The next time she made it into the money was in January 2009, when she came in 6th in a $22 NLHE Deepstack tourney on PokerStars for $216.

She also cashed in 6 events at the 2020 WSOP Online US segment on WSOP.com. That year, all the World Series events had to be played online due to the coronavirus pandemic. The biggest cash out of the 6 was $6,463, which she got for finishing 37th in the $1,000 NLHE Championship event.

Kerstetter was an ambassador for the major online poker room partypoker between 2013 and 2015.

She’s now an ambassador to the poker apparel store RunGoodGear and the co-host of Run It Once Poker’s “The Rake” podcast.

Her claims about Daniel Negreanu

Back in August 2020, Daniel Negreanu was under fire for snapping at a viewer during a livestream. This backlash against him ultimately led to his famous heads-up challenge against Doug Polk.

In the midst of all that, Kerstetter came forward and proclaimed on Twitter that she’s happy about all the criticism Negreanu was facing. According to her, Negreanu actively tried to hinder her career as a poker commentator by asking people not to put her on air, simply because he didn’t like her.

Kerstetter went on to commentate the heads-up challenge between Polk and Negreanu on a number of occasions, not hiding who she was rooting for. She must have been very happy with the outcome – Polk won by $1.2 million.