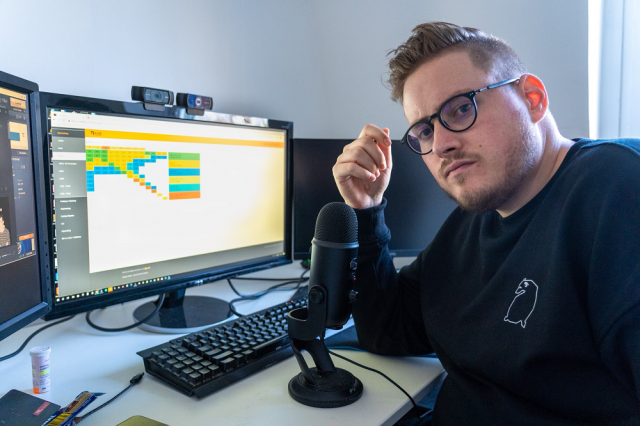 Jaime Staples is a Canadian professional poker player and Twitch streamer. He was born on May 27th, 1991 in Lethbridge, Canada.

For most of his career, he’s been playing online MTT’s on PokerStars under the screen name “jaimestaples”, where he’s won over $800K. However, with his signing with partypoker, he’s putting more volume in on his partypoker account – where he has the same moniker as on PS.

With over 140,000 followers, he’s one of the most popular poker streamers on Twitch. His YouTube channel has 80,000 subscribers where he gets 20-30 thousand views per upload.

Staples wrote about the story of his early career in great detail in a 2+2 Forum post. In that, he says that he originally wanted to become a professional golfer and was working at a golf course for minimum wage.

Poker got introduced to his life through a play money poker app his brother, Matt, was playing on Facebook. Eventually he registered on the late poker site Full Tilt and started grinding freeroll tournaments. Then, he decided to deposit on PokerStars and started playing real money S&G’s and MTT’s there.

He highlights a life changing moment when he won $2,700 after finishing 5th in a $3 rebuy tourney in August 2010. That prompted him to quit his job on the golf course and started pursuing poker as a career. He busted his bankroll shortly after – however, with the help of the poker coaching site DeucesCracked, he got back on the right track and has been a successful poker pro ever since.

Staples has focused on online poker for most of his career, so his live tournament resume is relatively underwhelming. He’s cashed for a combined $135,680 in live tournaments, over the course of 5 years and just 21 individual cashes.

The first ITM finish on his Hendon page comes from the 2013 WSOP.

His best live cash is a humble $26,800. He earned that by winning a €550 PLO tournament at the 2017 PokerStars Championship in Barcelona.

The Canadian Twitch star has cashed in two WSOP events in his career.

In 2017, he was featured in PokerStars’ Cash Game Challenge in Monte Carlo. He played 150 hands of €25/€50 NLHE with a €10 ante. He was playing against, among others, British pros Jake Cody and Sam Grafton.

Staples mostly plays tournaments online, although he does stream cash games as well occasionally. For example, in July 2018, he played in PokerStars’ promotional $5/$10 cash game stream in a line-up mixed with poker pros and eSport players.

His “PokerStaples” Twitch channel was started in late 2014. Only four months after his start, he managed to clinch a “Friend of PokerStars” sponsorship.

“The morning that PokerStars called me I realized that a major change was taking place in my life. It was one of those moments that I’ll always remember where I was.

When I started playing 6 years ago being a sponsored player by PokerStars was the goal. To me, it was what success was in poker. I since have set my sights even higher in the game but to have achieved something that seemed almost unattainable in the beginning was a huge confidence boost for me” – said Staples in a 2015 interview about being signed by the biggest online poker room.

At the very start of his streaming career, he gave a great deal of attention to his first few followers. He would rail for them in micro-stakes tournaments or even add them on Facebook. The time and effort paid out for him, he reached 10,000 followers on Twitch in 3 months. Today, he’s at 140,000.

Staples is also active on YouTube. As of the writing of this article, he has 80,000 subscribers. His channel pulls in a few hundred thousand views per month, between 20 and 30 thousand per video. His content is usually clips from his Twitch stream with a short intro edited to the beginning of the video.

As we wrote above, Staples was signed by PokerStars to represent the brand in early 2015. In 2019, however, Staples followed the path of many poker pros in ending his sponsorships with Stars. He joined partypoker Team Online instead.

Jaime Staples proposed to his girlfriend Rebecca in Paris, on November 22nd of 2018, after 18 months of relationship.

The last 18 months have been the best of my life. I want to make sure that the next 50 years are the same. My best friend, partner in crime, and love of my life. I couldn’t be happier @beccarr94 ❤️ pic.twitter.com/vKZwD55hvf

Boxing day dinner with the @beccarr94 ❤️ Happy Holidays everyone!

In 2017, eccentric billionaire and avid poker fan Bill Perkins booked an unusual prop bet with the Staples brothers, Jaime and Matt. The Canadian poker pros would have to be within 1 pound of each other in body weight in a year. They were putting up $3,000 against Perkins’ $150,000, so they were getting some good odds, 50:1.

At the time of the initial weigh-in, Jaime was at 304 lbs, while his younger brother, Matt, weighed 134 lbs.

The poker playing siblings managed to pull it off and won the bet. On March 25th, 2018 when the bet was due both of them weighed in at 188.3 lbs! That’s a stunning, 155.7-pound loss for Jaime, and an impressive, 54.3-pound gain for Matt. Matt put on some of that weight by eating a  large meal on the last day and guzzling a huge amount of water.

The story received attention from even outside the poker media. For example, they were featured on ABC’s long-running morning show Good Morning America.